Over the past three months France has witnessed hundreds of thousands of people taking part in demonstrations against the government's decision to impose a new labour law. Lead by the CGT (Confédération Générale du Travail) who want the reform withdrawn, the protests have seen workers, students and social media-driven groups, such as Nuit Debout, merge together in a quest to make their voices heard. 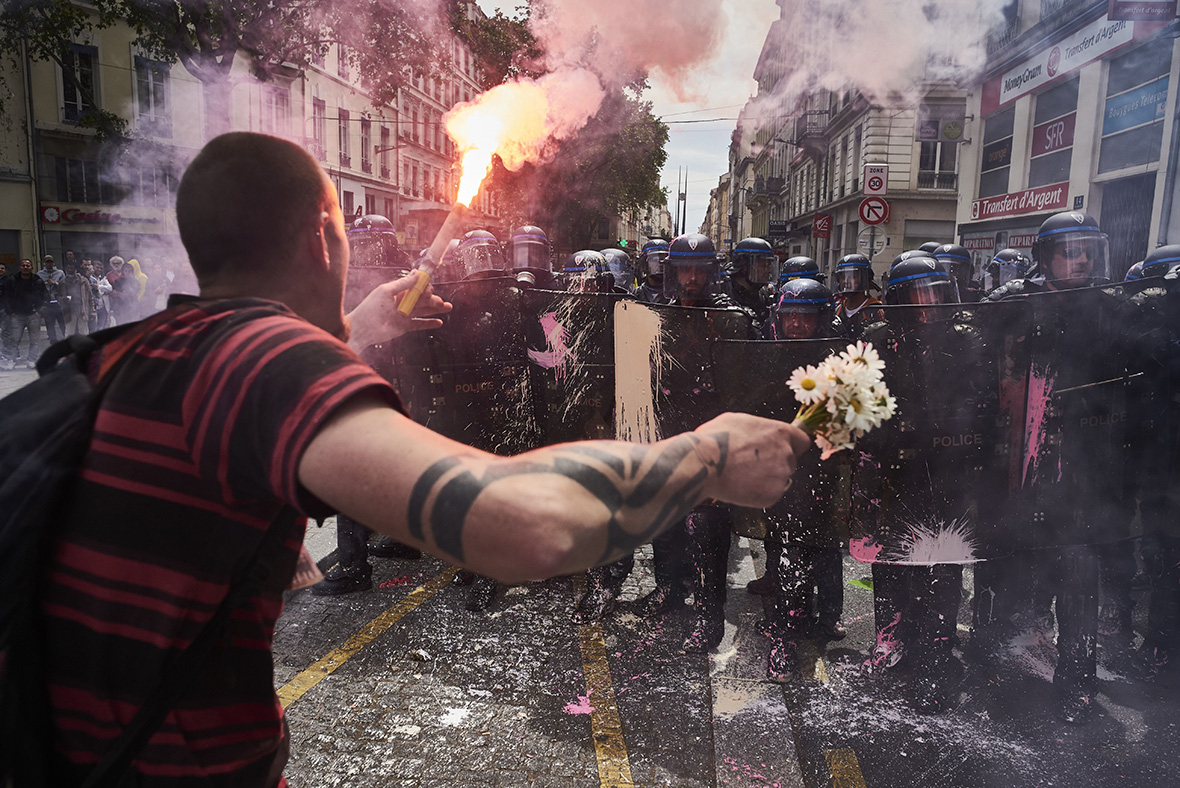 Using article 49.3 of the French constitution to push through the reform bill, the law, if passed by Hollande's Socialist government, would make it easier for companies to fire their employers if difficult economic circumstances arose. It would affect the rights of many French citizens, and would also allow firms to opt out of national labour protection rules if they create in-house deals on pay and conditions with the consent of the majority of their staff.

President Francois Hollande has warned the anti-reform protesters that he will not back down from his decision. Prime Minister Manuel Valls has also insisted the government will not withdraw the law, but that there could be some tweaks to the reforms although not on any of its key areas. 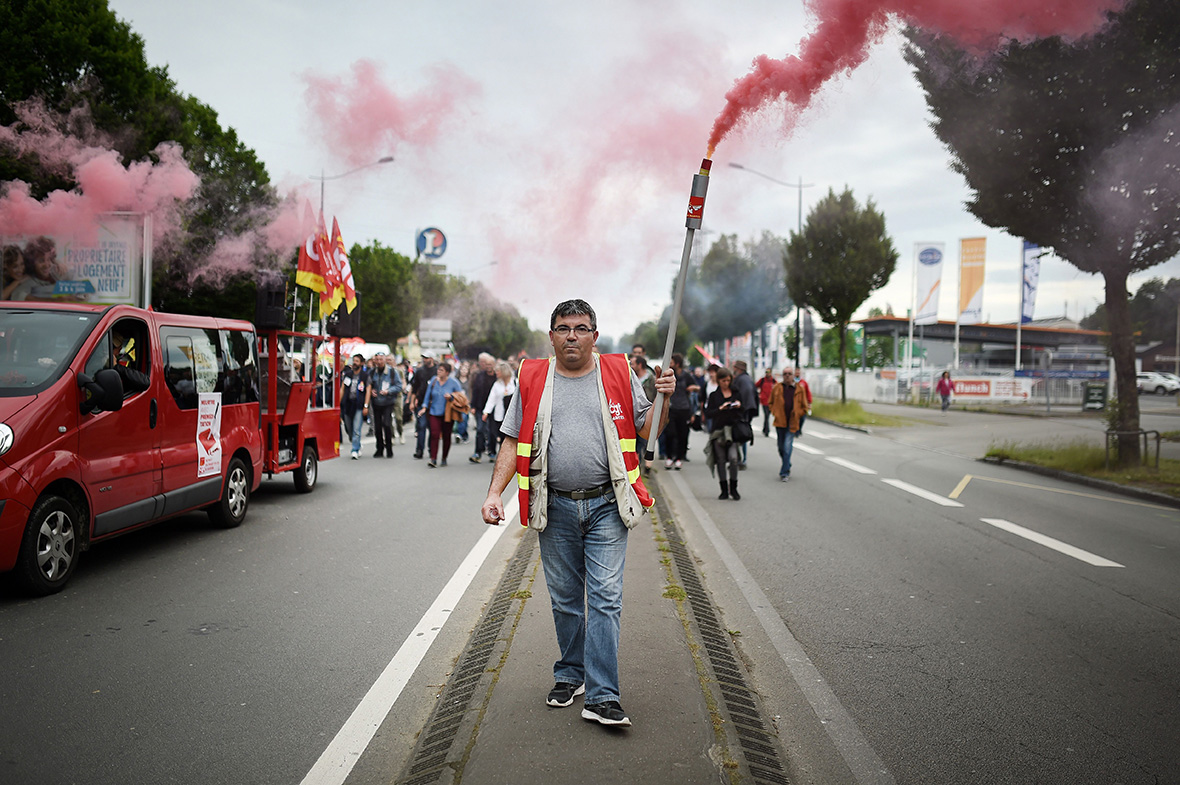 Over the past few days the demonstrations have escalated. Workers have set up picketers and barricades blocking access to a large fuel-distribution depot, causing the country to experience a severe petrol shortage. According to Reuters, some 741 of oil major Total's 2,200 filling stations were out of fuel, compared with 784 the day before.
In the Seine Maritime region north of Paris, local government prefect Nicole Klein said the number of petrol stations without fuel had fallen significantly and lifted rationing orders. 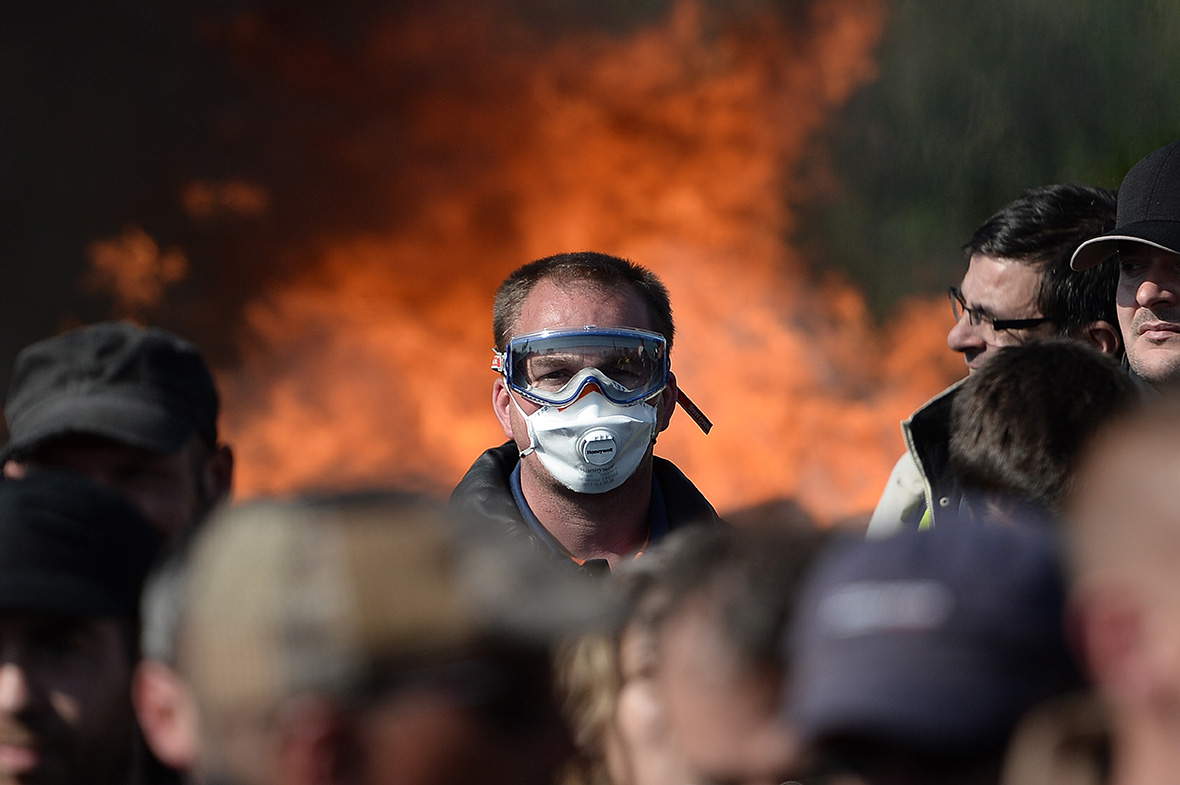 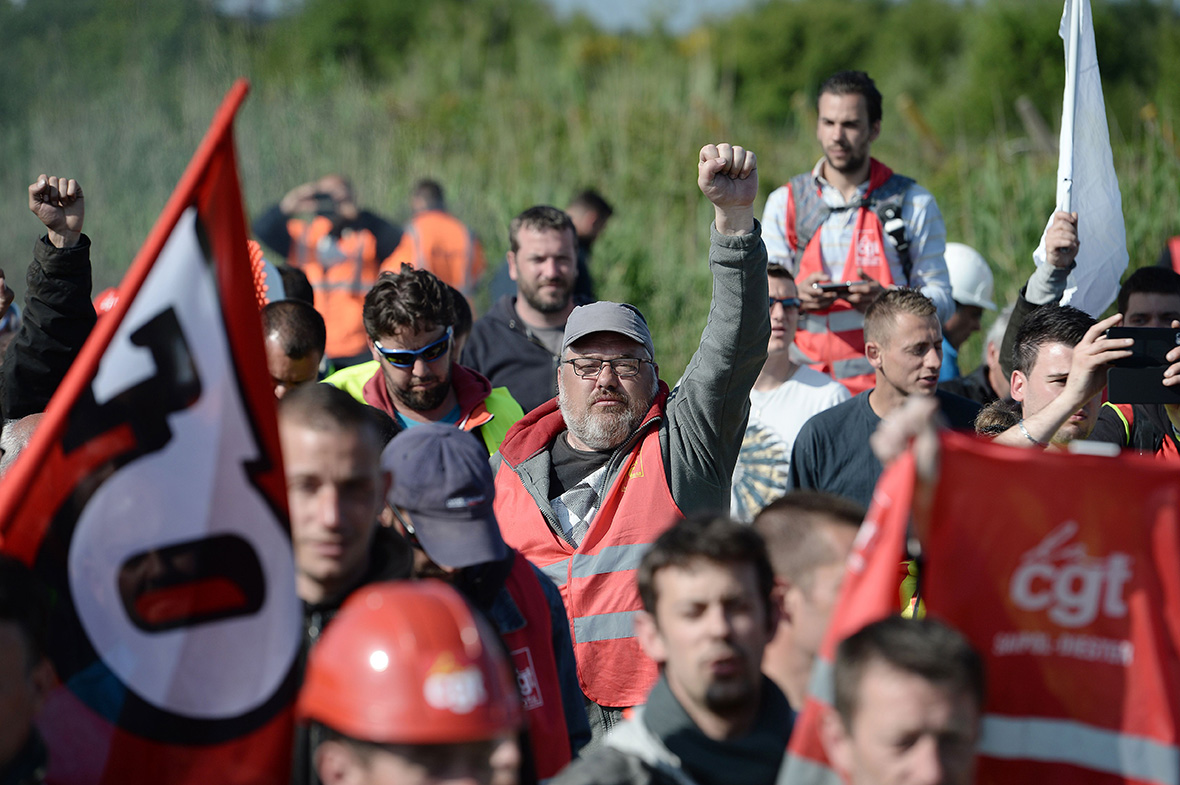 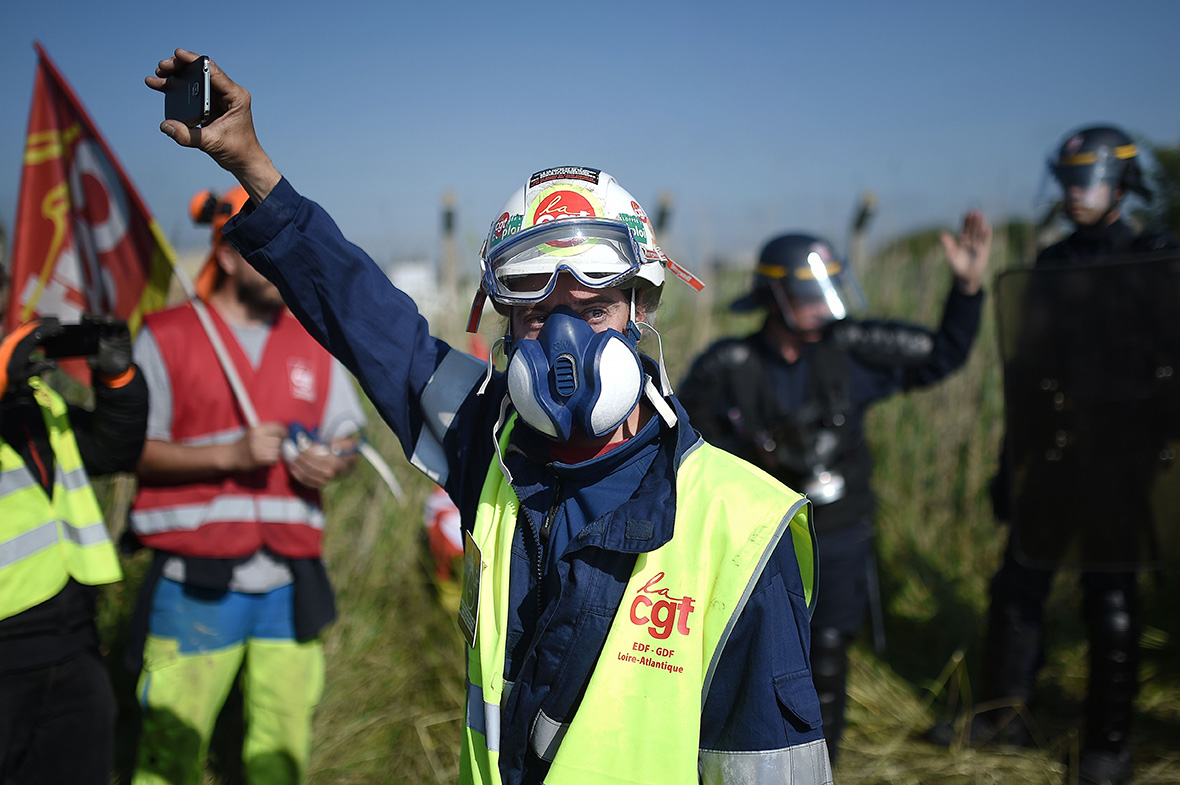 class="cap" itemprop="caption" style="padding: 0px; margin: 0px 15px 0px 0px;"Workers on strike are evacuated by riot police as they block the access to an oil depot near the Total refinery of DongesJean-Sebastian Evrard/AFP 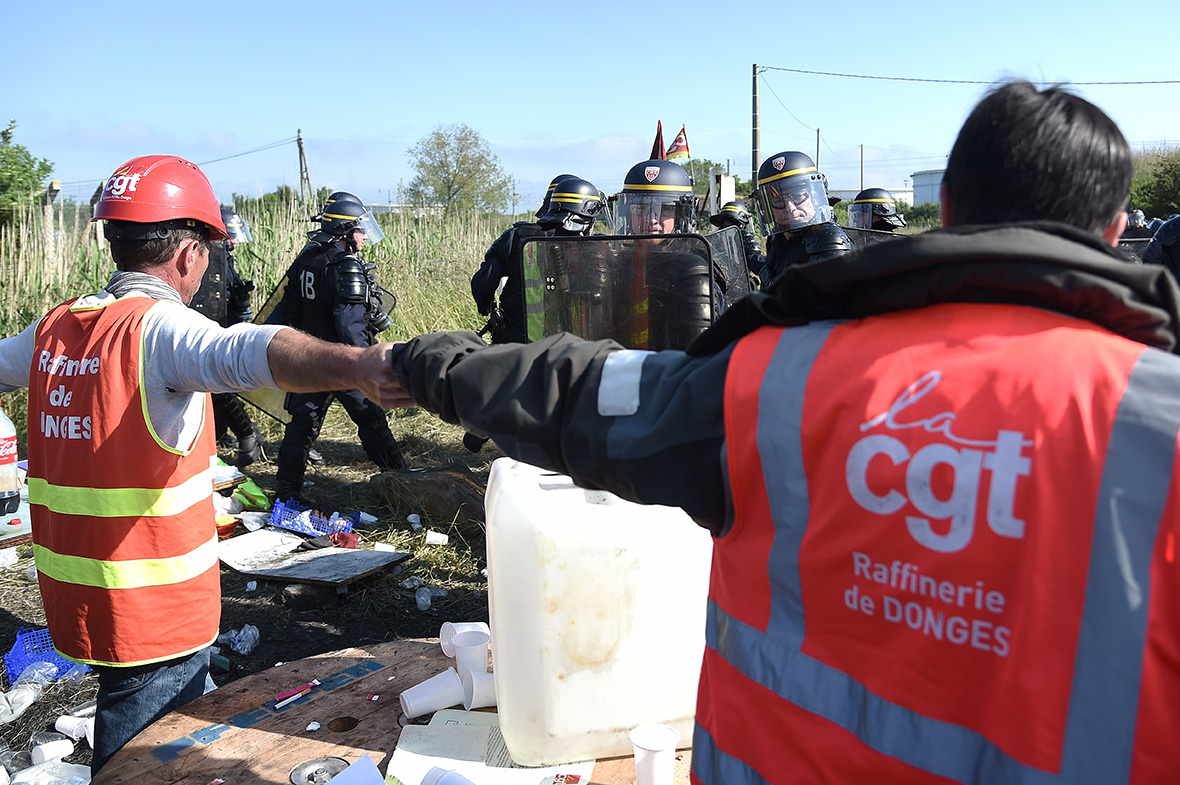 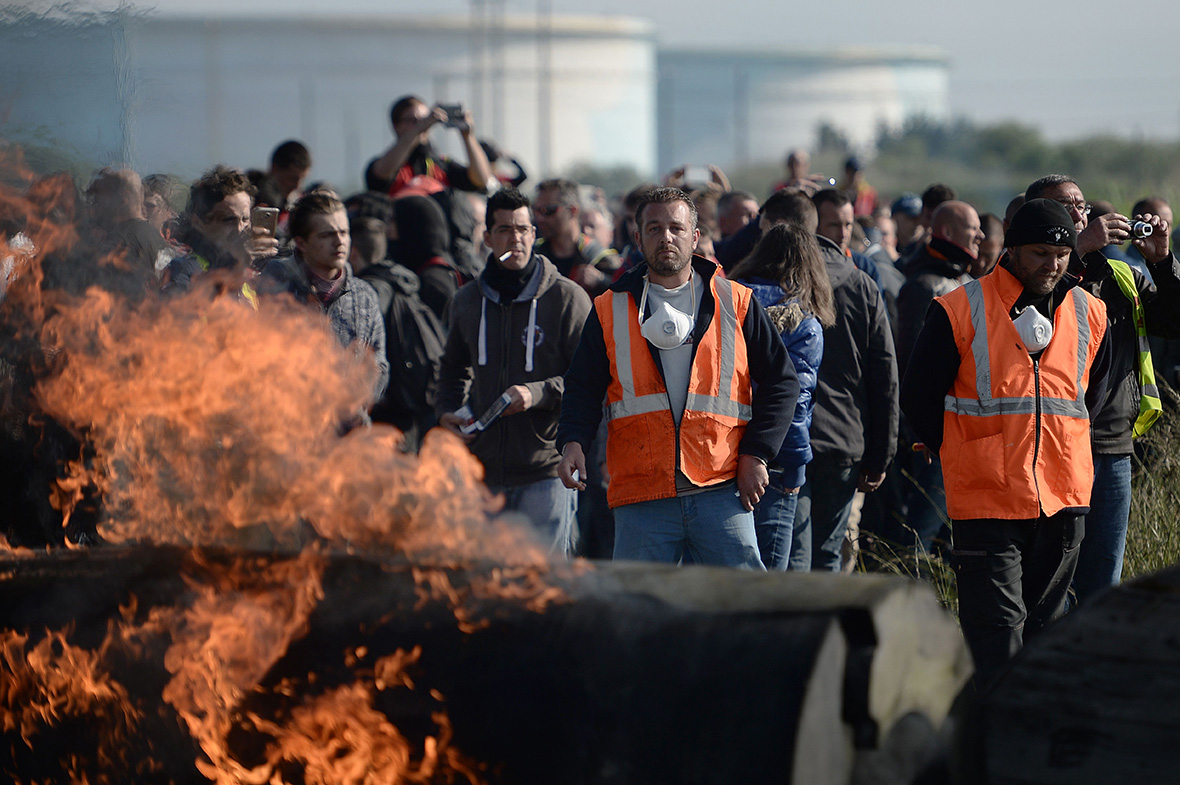 class="cap" itemprop="caption" style="padding: 0px; margin: 0px 15px 0px 0px;"Workers on strike set up a fire barricade to block the access to an oil depot near the Total refinery of DongesJean-Sebastian Evrard/AFP 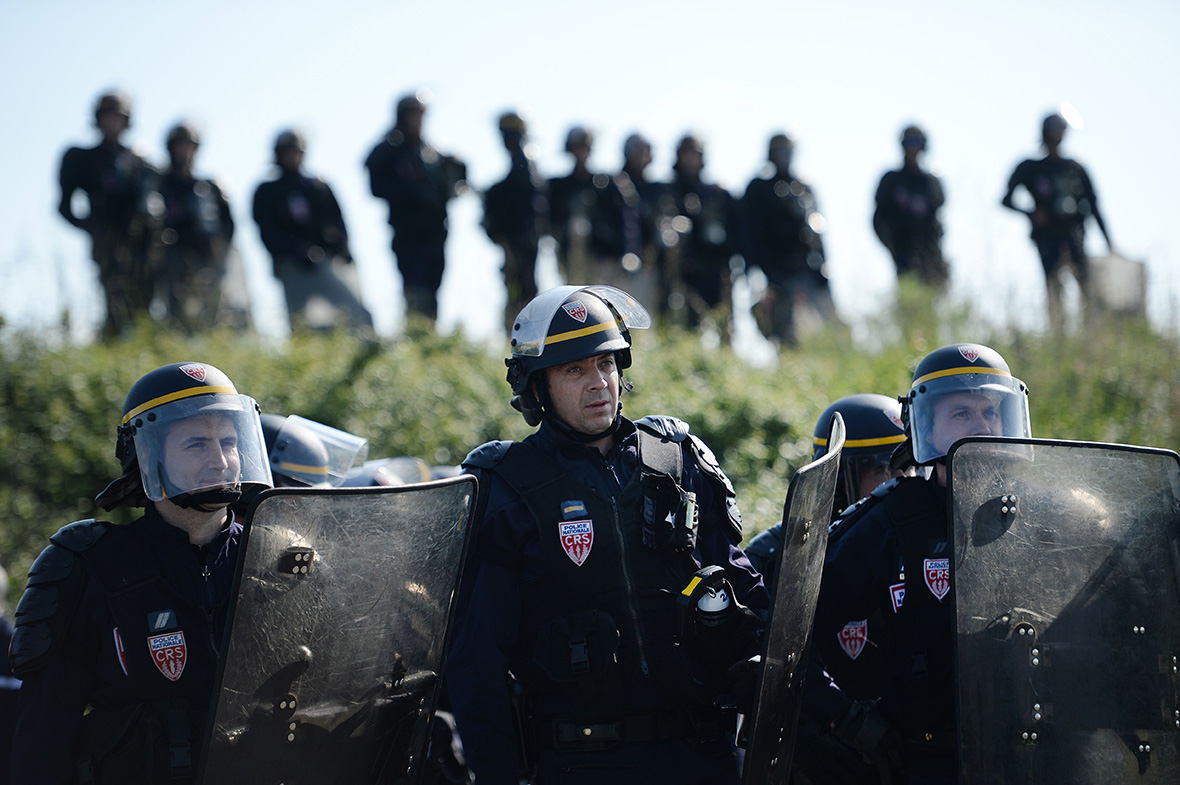 class="cap" itemprop="caption" style="padding: 0px; margin: 0px 15px 0px 0px;"Riot police stand during the evacuation of workers on strike blocking the access to an oil depot near the Total refinery of DongesJean-Sebastian Evrard/AFP 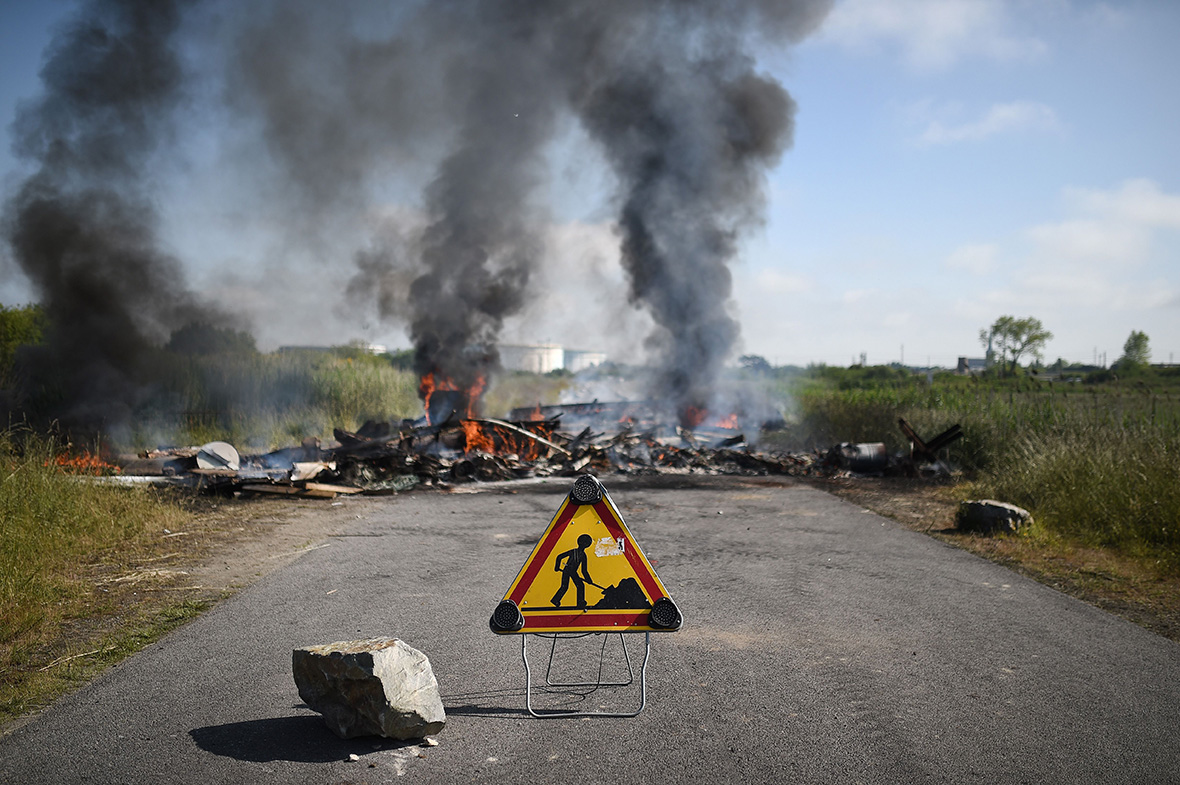 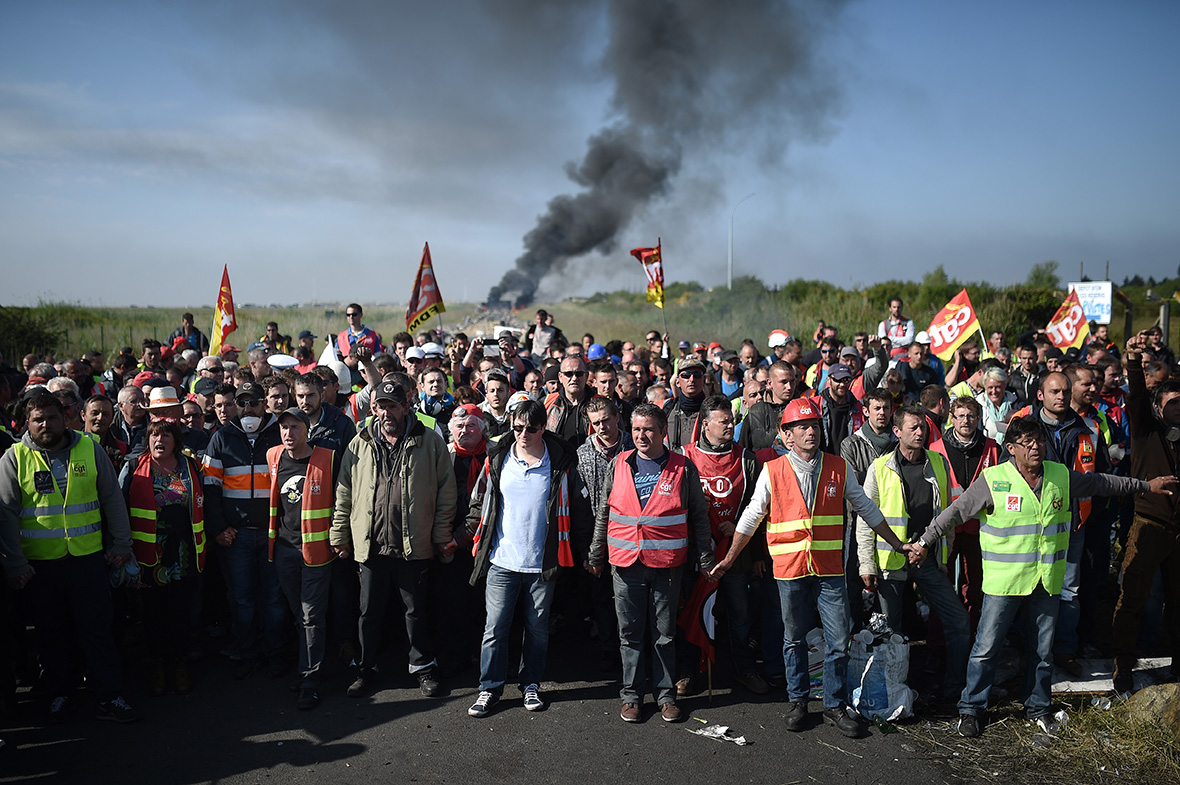 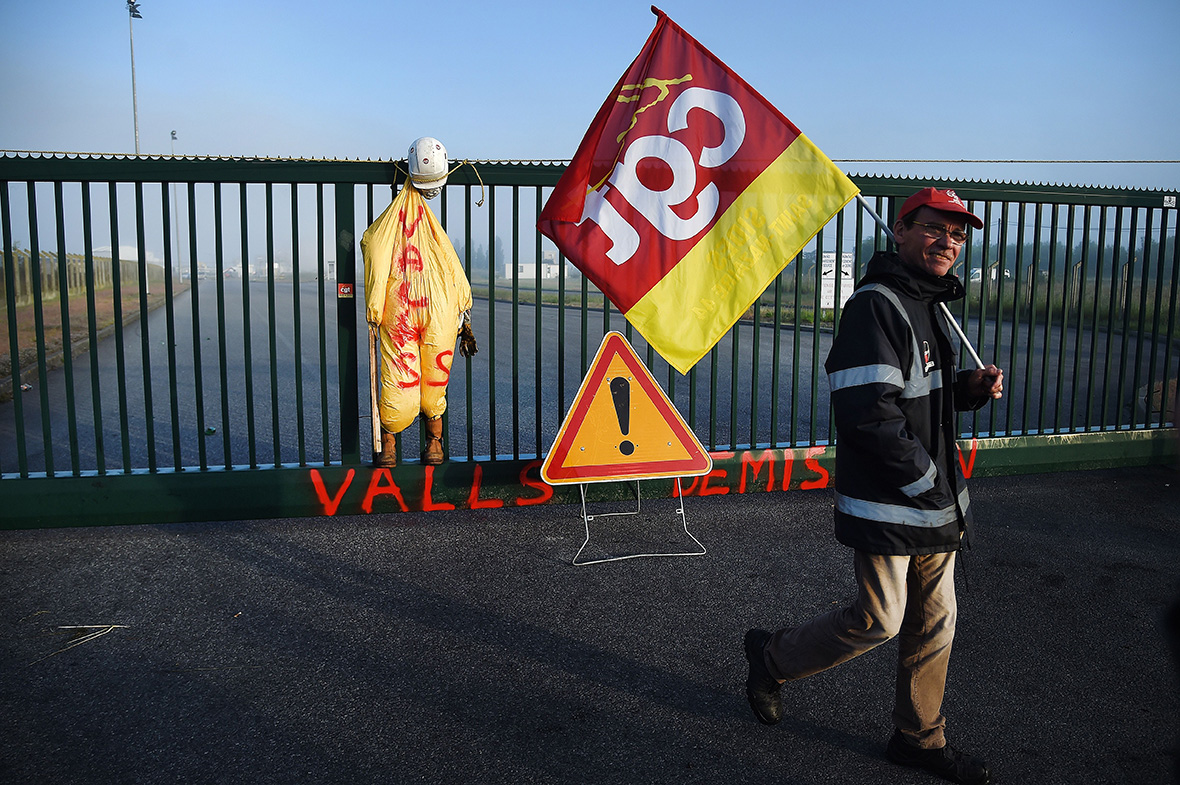 The CGT union has said that its members who were at the CIM oil terminal at Le Havre's port, which deals with 40% of France's crude oil import, had voted to extend their strike until 30 May.While the CGT members sought to cut off France's fuel supplies, those in other areas have continued their protests. Cities such as Nantes, Lyon and Paris have seen demonstrators marching down the street, adorned with placards determined for change.


The street demonstrations, which happened throughout the country on 26 May, saw 77 people arrested, a fraction of the some 150,000 people who took part in the marches, according to the Interior Ministry. So far the demonstrations have resulted in 1,300 arrests.
Concerns have now been raised about potential disruption to the Euro 2016 football tournament, which begins on 10 June. CGT leader Philippe Martinez laid the responsibility on the government. "As long as the government refuses to talk, there is a risk that the movement intensifies," he told Reuters.
i 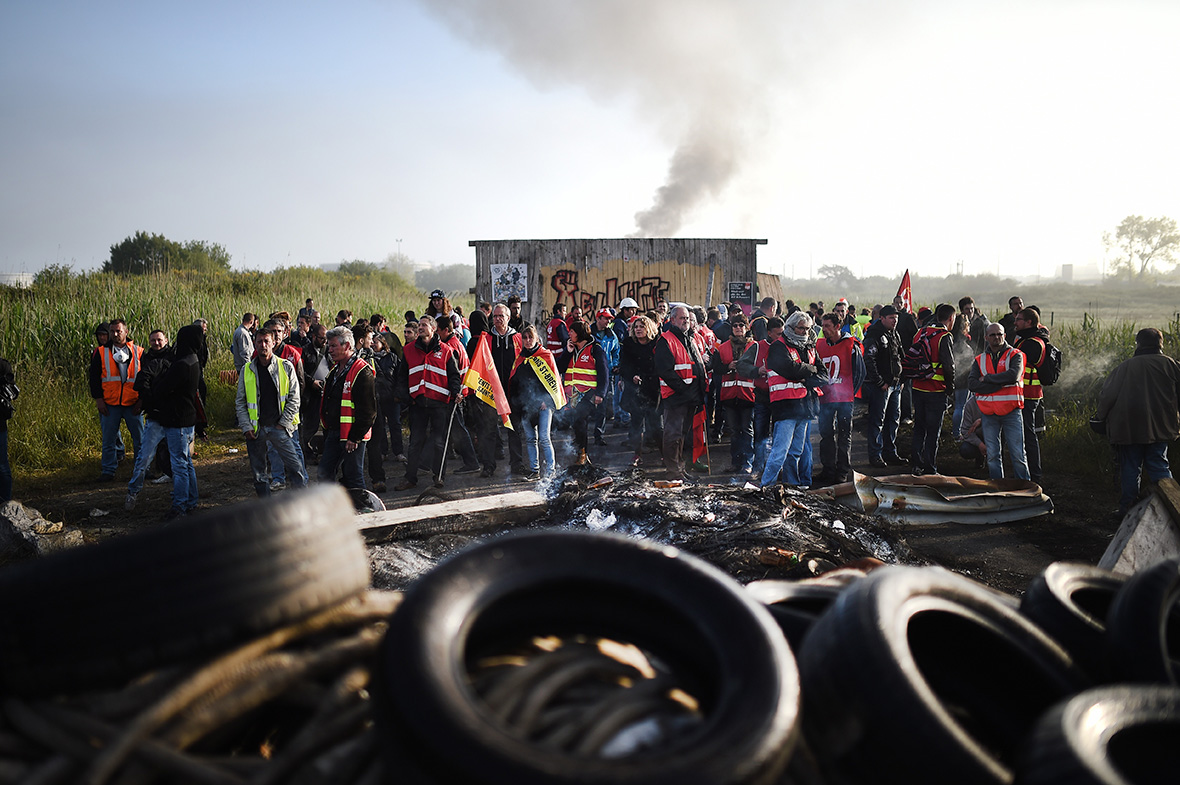 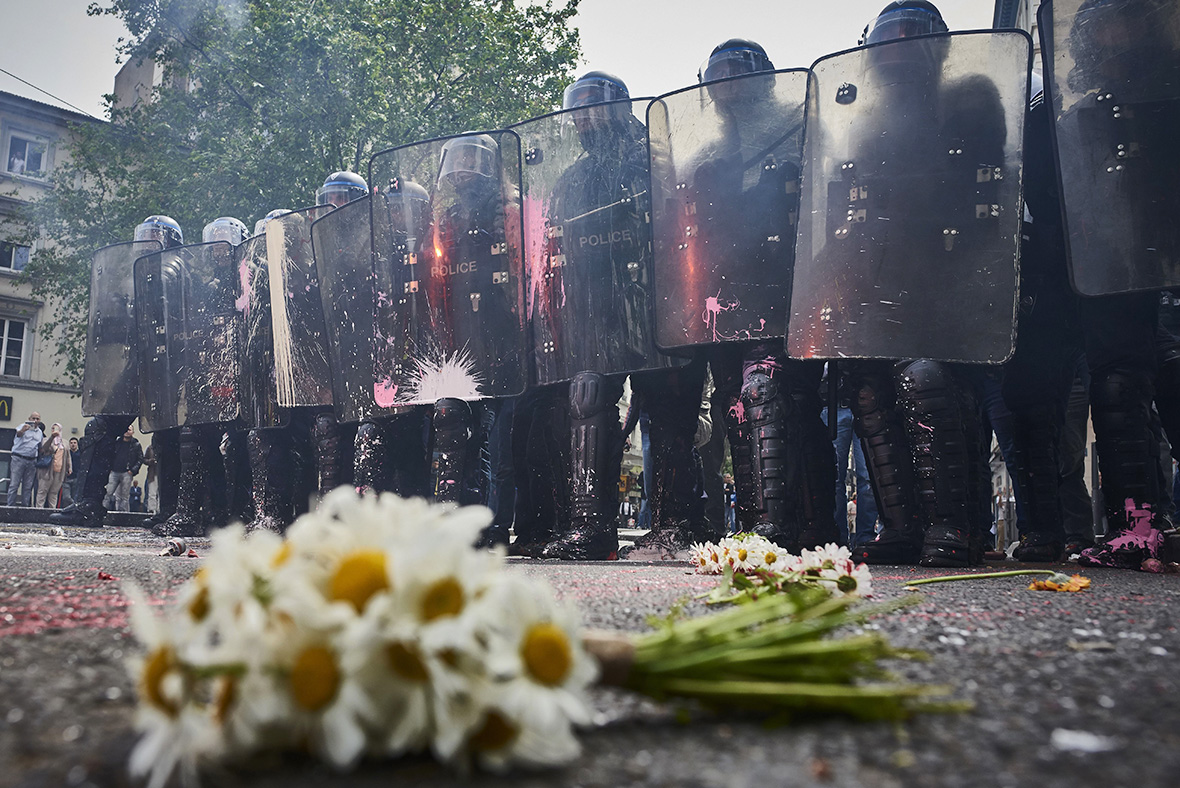 
France In Blackout As Strikes Cause Total Chaos

France is running out of gasoline and suffering blackouts as the number of French strikers continues to grow, bringing the country to a grinding halt.

Strikes in air traffic control rooms have seen most flights cancelled and hundreds of thousands of passengers stranded – and now the strike is about to hit the country’s nuclear power plants.

I offer this quote of the day: “One cannot just turn off a nuclear plant, it is not like a thermal or hydro plant.”

An estimated 20% of petrol stations have either run dry or are low on supplies.

Clashes broke out at one refinery early on Tuesday when police broke up a blockade at Fos-sur-Mer in Marseille.

Prime Minister Manuel Valls insisted the labour laws would stand, and that further blockades would be broken up.

“That’s enough. It’s unbearable to see this sort of thing,” he told French radio.
“The CGT will come up against an extremely firm response from the government. We’ll carry on clearing sites blocked by this organisation.”

The union is aiming to cut output by half at the refineries and wants strikes on the railways as well, in an attempt to reverse labour laws that make it easier for companies to hire and fire staff.

There are concerns that the disruption may affect the Euro 2016 football championships, with one former union leader saying the event is not “sacred”.
The government provoked union outrage when it resorted to a constitutional device to force its watered-down labour reforms through parliament without a vote, earlier this month.

The strike is a result of an action by French President Francois Hollande to pass a law by decree. I wrote about that on May 10 in Hollande to Force New Rules by Decree, Risking Vote of No Confidence.

Parliamentary rules in France are a bit bizarre. Rules allow the president to pass legislation directly, over the wishes of parliament, without a vote
.
The legislation stands unless the president fails a confidence vote.

Expect a vote shortly as Hollande whipped up legislation that neither the left nor the right can stand.

I commented at the time “More than likely, Hollande will survive. The socialists are going to get clobbered in the next election and to vote against Hollande now will put them out of a job now rather than next year. Surprises are possible if disgust gets low enough, but in general, politicians would rather have a paycheck than do the right thing.”

The result was a surprise strike.

Hundreds of thousands of British holidaymakers face disruption and frustration over the half-term holiday, as striking air-traffic controllers and refinery workers bring chaos to the transport network for people travelling to, through and over France.

Members of air-traffic control unions are unhappy about proposed changes to working arrangements and retirement conditions, and what they call “The inability of our government to develop a human resources management policy”. They also claim their salaries are “significantly lower than those of their counterparts in other major providers”.

The largest union, the SNCTA, will strike on five further days: tomorrow, from 3 to 5 June and on 14 June. Previous stoppages have caused hundreds of cancellations, with flights between the UK and Spain particularly badly affected.

Tomorrow will be the seventh day of industrial action by French air-traffic controllers in the past two months. Ahead of the strike, Ryanair has cancelled 70 flights , including some services from Birmingham, East Midlands, Manchester and Stansted to France, Portugal, Spain and Switzerland.

British Airways has cancelled at least 20 flights, including six between Heathrow and Madrid, and four each to and from Barcelona, Nice and Paris. Passengers to Geneva, Marseille and Toulouse are also affected.

Question of the day: When do the police strike?

While pondering that question, the latest news is grim.

In the past week French workers led by the CGT have blocked oil refineries around the country in protest at the planned reforms aimed at making it easier for firms to hire and fire, which has led to fuel shortages in large parts of the country and long queues of cars at near-empty petrol stations.

CGT energy and mining federation spokeswoman Marie-Claire Cailletaud said the strike action at nuclear plants, set to start Wednesday evening at 20.00 Paris time (1800 GMT), will reduce power output, but the reactors will not stop running.
“One cannot just turn off a nuclear plant, it is not like a thermal or hydro plant,” she said.

Staff in at least four fossil fuel-fired plants have also voted to strike, she added.
Ministers went on radio morning shows to say the government would stand firm, while CGT chief Philippe Martinez told RTL radio that his union, one of the most powerful in France, would press on with its strikes.

The government has accused the CGT of taking the country hostage.

“A small minority is trying to radicalise things,” Junior minister Jean-Marie Le Guen told RTL radio. “We will unblock the situation,” he said, adding that a union “cannot govern the country”.

Undeterred, CGT chief Philippe Martinez told France Inter: “We will carry on.”
So far the strikes have affected oil depots and refineries, triggering shortages, and train and Metro strikes have been announced too.

The nuclear plant strike is a further escalation of a conflict that also threatens to affect the Euro 2016 football championship, which starts on June 10 in France.