Donald Trump is, of course the perfect candidate for the United States and, if elected, will speed up the process of collapse.

Whatever insane things he might say (reflecting his constituency perfectly) will not make an ounce of difference to something that is in train whatever we choose to do.

We are living in the Age of Consequences - and Donald Trump may be a consequence. 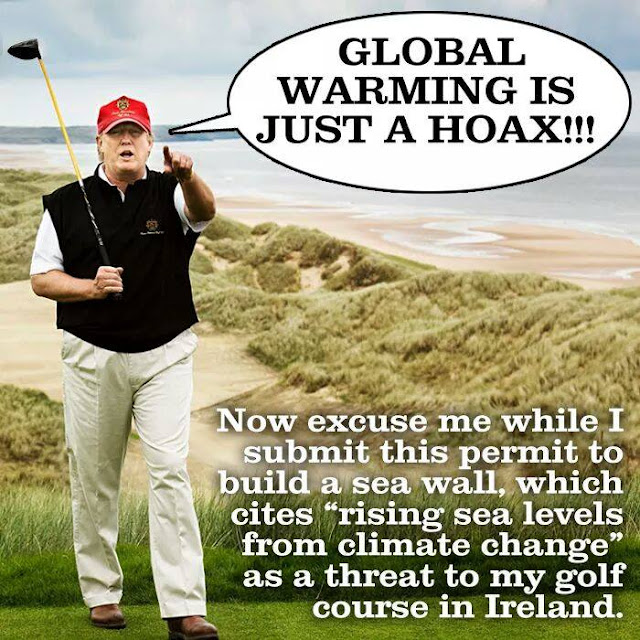 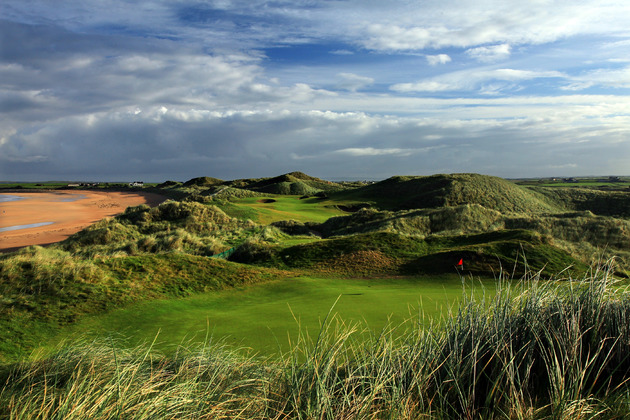 DONALD TRUMP IS pulling out all the stops to get an Atlantic wall built at his golf course in Co Clare.

The billionaire mogul and presumptive Republican US presidential candidate has been engaged in an ongoing saga since he bought Doonbeg Golf Club in Clare in 2014.
The Trump-owned TIGL Ireland Enterprise Limited wants to build a 2.8km berm on a sand dune at Carrowmore Bay to protect its investment against coastal erosion and storm damage.
The move has been opposed by conservationists in Ireland – with Carrowmore dunes being designated a Special Area of Conservation and a Natura 2000 site.
Last month, the plans for the wall hit a snag after TIGL’s application to have it declared a strategic infrastructure development has been denied by An Bord Pleanála.

Now, the company has filed a planning application with Clare County Council – complete with a 242 page Environmental Impact Statement prepared by an Irish consultancy firm - for the wall to be built.

The application, first reported today by Politico, cites local regulations pertaining to “rising sea levels and increased storm frequency and wave energy associated with global warming” as cause for the wall to be built.
The company’s concern for global warming is at odds with Trump’s own views on the subject, which he has called a “con job” and a “hoax” in the past. 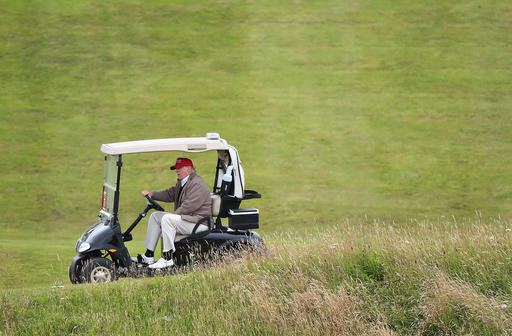 (File photo) Trump drives a golf cart at a course in ScotlandSource: Trump Scott Heppell/AP
Global warming
Trump, who has roiled the immigration debate by proposing to build a massive wall along the Mexican border, has repeatedly taken to Twitter to express skepticism that human activity is causing the world to warm, raising sea levels as the polar ice caps melt.
He has also said he would seek to “renegotiate” the global accord to cut climate-warming carbon emissions agreed to by President Barack Obama in December.
“The concept of global warming was created by and for the Chinese in order to make U.S. manufacturing non-competitive,” Trump tweeted in 2012.

Source: Donald J. Trump/Twitter
“The entire country is FREEZING – we desperately need a heavy dose of global warming, and fast! Ice caps size reaches all time high,” Trump tweeted in 2014.
Source: Donald J. Trump/Twitter
Trump campaign spokesman Alan Garten did not respond today to messages from The Associated Press seeking comment.
Environmental groups pounced on the application as evidence of hypocrisy.
“Donald Trump clearly cares more about the fate of his golf courses than the health of the millions of families already affected by the climate crisis,” said Adam Beitman, a spokesman for the Sierra Club.

Of course,what this article in a liberal publication is saying is that Donald Trump is outside the mainstream.
It does show that, like Alex Jones he does have a screw or two loose.

Soon, you might be able to find one in the Oval Office.

Generally, presidential candidates tend to shy away from conspiracy theories.

They involve a mixture of paranoia and gullibility that seems ill-suited for someone seeking access to America’s nuclear codes.

But Donald Trump is a different kind of candidate. He has embraced a wide range of fringe conspiracy theories.

Nevertheless, Republicans are rallying to his side and polls show him reasonably competitive with likely Democratic nominee Hillary Clinton.

Here are the views of a man who might be the next president.

There are mountains of scientific evidence that asbestos is extremely dangerous to humans. It causes cancer and kills more than 12,000 people every year.
Trump, however, considers the substance a safe and effective fire retardant.

Trump has called the idea that asbestos is unsafe a “great con” propagated by the mob, presumably so they could make money on asbestos removal.

There is no drought in California

Donald Trump told an audience in Fresno that “there is no drought” in California.

According to Trump, the state has plenty of water but it’s being held hostage by environmentalists in government. The idea that the government is engineering the drought was popularized by professional conspiracy theorists like Alex Jones.
California, in fact, is facing a severe drought of historic proportions that covers nearly 95% of the state.

The state is drier than it has been in at least 500 years.

Climate change a hoax invented by the Chinese

In fact, a recent study confirmed 97% of climate scientists agree that climate change is real and is being driven by human activity.

Trump has repeatedly claimed that thousands of Muslims in New Jersey were cheering as the World Trade Center came down on 9/11 and he watched them do it on TV.

A rumor circulated at the time that this happened but it was widely debunked. There is no video evidence — or any kind of evidence — that such an event occurred.

Trump has been outspoken in his belief that childhood vaccines are linked to autism, including at a recent GOP debate.
Vaccines do not cause autism.

Obama was born in Kenya

Trump spent much of 2011 and 2012 raising questions about the legitimacy of Obama’s birthplace, feeding into conspiracy theories that he was born in Kenya and ineligible to be president.

He continues to raise doubts about Obama’s birthplace to this day. Asked last June on CNN if Obama was born in the U.S., Trump said he still wasn’t sure.
Obama was born in Hawaii and claims to the contrary have been repeatedly and definitively proven false.

Obama is really a Muslim

Donald Trump has also repeatedly suggested that Obama, who is a Christian, is actually a secret Muslim. Trump connected this to the birth certificate controversy, saying he was hiding his real birth certificate because it said he was a Muslim.

Another one of his proof points was a statement Madonna made at a concert.
She was being sarcastic. There is no actual evidence to support the claim.
Nevertheless, fully two-thirds of voters today with a positive opinion of Trump believe Obama is a Muslim.

In 2011, Trump told a conservative conference that “the people that went to school with him, they never saw him, they don’t know who he is. It’s crazy.”
There are multiple reports of classmates recalling their time with Obama at Columbia.

The Clintons may have murdered Vince Foster

In a recent interview with the Washington Post, Trump called the death of Vince Foster, a close friend of the Clintons, “very fishy.” Foster committed suicide in 1993.

There is a long-running conspiracy theory that Bill or Hillary Clinton murdered Foster because he knew too much.

This theory was investigated and debunked by Ken Starr, a noted Clinton antagonist.

Supreme Court Justice Antonin Scalia died in February. He suffered from several chronic conditions and the judge who pronounced him dead said he died of “natural causes.”

Trump immediately speculated that he was murdered. “I’m hearing it’s a big topic, that’s the question. And it’s a horrible topic, but they say they found a pillow on his face, which is a pretty unusual place to find a pillow,” Trump told right-wing radio host Michael Savage.

Law enforcement told the judge that there were “no signs of foul play.”

As the Republican primary whittled down to a race between Donald Trump and Ted Cruz, Trump accused Cruz’s father of conspiring with Lee Harvey Oswald to murder President John F. Kennedy.

“His father was with Lee Harvey Oswald prior to Oswald’s being — you know, shot. I mean, the whole thing is ridiculous. What is this, right prior to his being shot, and nobody even brings it up,” Trump told Fox News.

Trump was referencing a story published by the National Enquirer. It was based on a photo of Oswald standing with a man.

There is no actual evidence that the man in the photo is Cruz’s dad or that Cruz’s dad ever met Oswald.

Trump says ISIS is providing phones to refugees attempting to enter the United States and will use them to conduct another 9/11-style attack in the United States.
There was actually one unconfirmed report that videos of ISIS flags were found on the phones of refugees seeking to enter Norway. This report was heavily promoted on U.S. conspiracy sites.
*****
Trump himself is willing to say almost anything. But he’s willing to validate and legitimize people who are willing to go even further. For example, he appeared on Alex Jones’ radio show in November. Jones runs the site InfoWars and says that tragedies like 9/11 and Sandy Hook were actually “false flags” perpetrated by the U.S. government.

“Your reputation is amazing,” Trump told Jones, “I won’t let you down.”