Devotion knows no bounds when it comes to bees 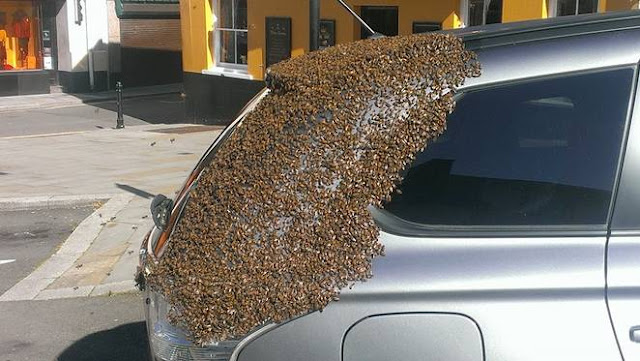 Devotion knows no bounds when it comes to bees and their leader.

When Carol Howarth parked her Mitsubishi in the town of Haverfordwest, Wales, to do some shopping, little did she know the mayhem that would ensue.

While she attended to her errands, a swarm of 20,000 bees was drawn to her car. A local man, Tom Moses, saw the buzzing hubbub and concerned that the bees might be poorly handled, called in a team of beekeepers.

"It was spectacular. I was driving through when I spotted the big brown splodge,” he said. "A lot of people were really amazed by it, cars were slowing down and people were taking pictures of it."

With the beekeepers on the job, by the time Howarth returned the situation appeared to be resolved.

But, no. The swarm kept her in their sights and managed to track her down.

"The next day I realized that some of the bees had followed me home,” she said. So she summoned the beekeepers, who arrived ready for rescue.

“We think the queen bee had been attracted to something in the car, perhaps something sweet, and had got into a gap on the boot’s wiper blade or perhaps the hinge,” says Roger Burns of Pembrokeshire Beekeepers. “The swarm of around 20,000 had followed her and were sat around on the boot of the car.”

In the end, the adventurous queen and her subjects were reunited without harm.
Burns says that it was the strangest bee-thing he’d seen in three decades of beekeeping. “It is natural for them to follow the queen but it is a strange thing to see and quite surprising to have a car followed for two days. It was quite amusing.”