Exclusive: Hezbollah Captures CIA Officer in Aleppo, Commanding al Qaeda
...and the US is still trying to say al Qaeda, now exposed as a CIA franchise, aided Israel and Saudi Arabia with 9/11... 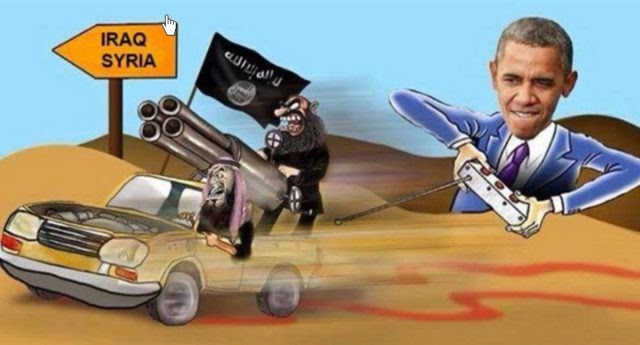 The Last minutes game, Who wins? CIA operative in Hizbollah grip. DESI: Al Nusra will lead the moderate opposition
Exclusuve from  …Nahed Al Husaini,  Damacus VT Bureau Chief
Introduction by Gordon Duff
Veterans Today now has two confirmed sources that an American CIA agent was captured this week near Mount Simeon, outside Aleppo.  The American was part of a group commanding an operations room Jabat al Nusra, al Qaeda’s “franchise” in Syria.  The CIA has denied the claim, but it has already floated an offer through 3rd party sources to buy their man back.
VT exclusively reported the capture of an Israeli advisor with ISIS in Iraq in October 2015, while in April of that year, America’s Delta Force (a group founded by a VT advisory board member), barely rescued a retired American general from Syrian spetsnaz closing in on him near Deir Ezzor. From an exclusive VT report:
The American general in the Al Amr district of Deir en Zor, a command and control facility between Mosul and the ISIS military headquarters in Syria, al Raqqah, was discovered by the NSA through intercepts of encrypted communications, to be the target of a Syrian Spetznaz team.  The Syrians were working with intelligence received by a Saudi officer captured two weeks before near Idlib, a town outside Aleppo.
If Syria could capture a senior American military official inside its borders, with inexorable proof of American complicity in the operational command of ISIS military forces, the Russians and Chinese would no longer be able to ignore the nature of the attack on Syria, according to high level sources in Damascus.
In a report confirmed in Syria and Iraq, the Delta Force team flew out of a secret base in Western Anbar, only a short distance from the Euphrates River, executed in extraction of the highly embarrassing CIA operative and “sanitized” the ISIS compound, leaving nothing alive but goats and chickens.
Highly placed sources told VT that Hezbollah seized four intelligence officers in a quality military operation near Khan Toman, the stronghold of Al Nusra, on May 12th. The officers are American, French, Turkish and Saudi. They were running the joint operations room with Al Nusra leading militants.
Khan Toman is a  village in the area of Samaan Moutain.  It is about 10 km south-west Aleppo, where huge grain silos are located.

The US is currently tightening the noose on Hezbollah, in an effort to deprive the Party of its financial resources as a reprisal for siding with the Assad regime. Iran is the main supplier of Hezbollah armaments Hezbollah Party Leader Hassan Naserallh recently pledged to continue the struggle and defeat the US-Israeli project in the region, saying that the “Party has a good catch,” without elaboration. 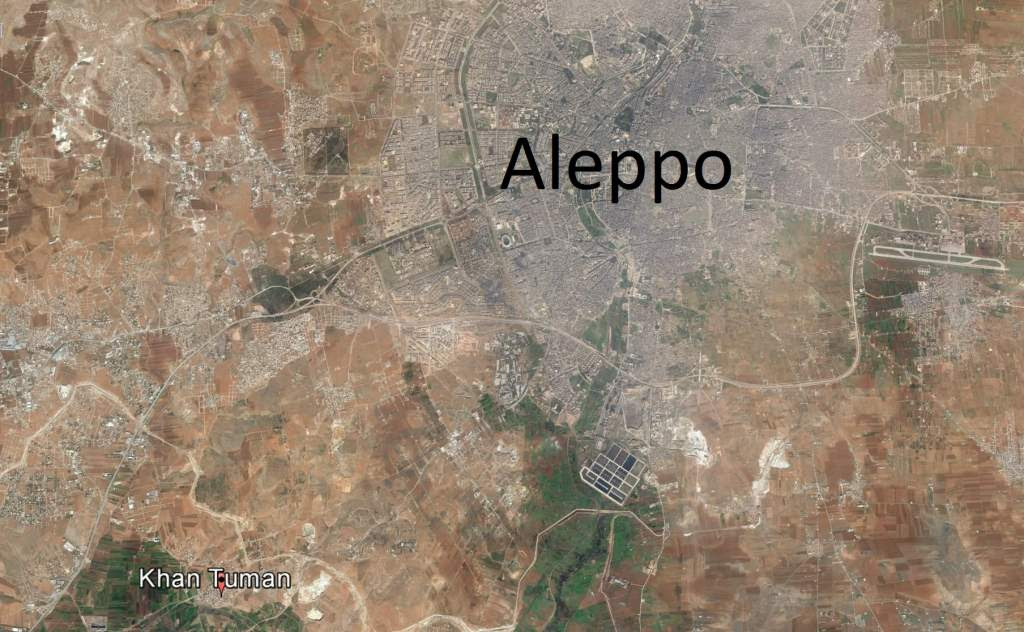 The Hezbollah clandestine operation came after 9 Iranian revolutionary guards fighters were killed in Khan Toman , in fighting with Al Nusra. The Aleppo combat is gaining a momentum now and the Russians with their allies are working round-the-clock to evict the armed gangsters from the areas which they still control by the help of foreign powers.
It is believed that CIA operatives are now advising ISIS and Al Nusra on their subversive activity schemes,  at the same time, DESI confirmed that there are already US special forces experts operating inside Syria, mainly in the Kurdish areas, Daraa and Quneitera, in an attempt to tip the military balance in favor of the opposition.
Also, DESI says there are 5000 “Blackwater” mercenaries, many recruited from Sudan, in Jordan awaiting a signal from the Pentagon to enter the Syrian borders and incorporate with the militants, especially in Daraa, where al-Nusra fighters are predominant there.  The current incarnation of the infamous mercenary group, according to DESI sources, is reputed to be run by right wing GOP operative and “soap magnate” Richard (and wife Betsy) DeVos of Ada, Michigan, father-in-law of frontman “Erik Prinz,” is also coordinating al Qaeda operations in Yemen as well.
European Department for security and information (DESI) secretary General Haissam Bou Said said “Al Nusra will be the US umbrella for uniting the moderate opposition. If the US and Russia fail to agree on the outstanding issues, the Middle East region will set on fire, yet, the battlefield will be the benchmark.”
Bou Said revealed that the NATO is currently unable to confront the Russians militarily in Europe. Therefore, this will give the Russians a considerable margin to move in the Middle East.”
Second CIA
Sources inside the US intelligence community, however, tell a different story.  They cite a rift between a “second CIA” run by Bush era contracting firms that had taken over all command functions for that organization, groups now in the pay of Saudi Arabia and the Gulf States, using CIA resources including the massive CIA base in Kosovo, Camp Bondsteel and the reputed CIA covert operations facility at the US Naval Support Activity in Dubai, and the “real CIA,” whatever that is.

There is talk in Washington that both the FBI and NSA are investigating CIA actions in Syria.  A high level FBI whistleblower says they have evidence that the CIA is directly involved in Syria “on the ground,” training their intelligence staff, special operations teams and running a sniper school.

Informants also state that, with extremist Avigdor Lieberman taking over as Israeli Defense Minister, Israel is preparing a new move into Lebanon in support of ISIS and al Nusra.  Sources say that Israel believes the terror groups can act as a blocking force against the military resurgence of Hezbollah, now advancing against ISIS taking town after town, alongside the reinvigorated Russia trained Syrian Arab Army.
Sources in Israel are also certain that such a move would put Israeli cities under missile bombardment that would expose the “Iron Dome” system as the fraud it is, a sacrifice Lieberman, a hardcover Bolshevik, is prepared to make to justify an attack on Iran.  Source indicate that this plan is largely predicated on a Trump presidency, in an election gambling boss Sheldon Adelson has agreed to fund with up to $3bn in Macao “black funds.”
Background
US-Russian tug of war in Syria overshadowed the accelerating events that occurring worldwide. Both super powers are flexing their muscles in a show of defiance despite the previous understandings that were reached between Obama and Putin.
A Russian source told VT “no one knows what is in the mind of the Russian Caesar unless you blow it up.” President Vladimir Putin, a former KGB officer, has realized that the Americans are playing on time regarding Aleppo truce, using the technique of the revolving door. “The influx of militants never stopped flowing from the Turkish borders, while the inflow of armaments is by leaps and bounds,” an eyewitness said.
Syrian military source said. It is evident that the Russians are trying now to avoid any direct clash with the Americans on the ground, yet, The Pentagon is still refraining from conducting joint sorties with the Russian military to strike ISIS and Al Nusra strongholds.
Moreover, The so called US backed moderate opposition embracing Muslim brothers and al Qaeda affiliated groups are constantly breaching the ceasefire, and the Americans turn a blind eye to their practices and the massacres they are committing on a daily basis in Aleppo and other Syrian provinces.
VT understands that there is a Russian military plan now underway to halt terrorist violations and to curtail the advance of the Democratic Syrian forces along with the Army of Rebels to take over Raqaah as planned by the Americans. The Syrian army is making now headways in Eastern Ghouta with the help of Hezbollah fighters, as well as in Damascus suburbs

DESI: MIT collusion with ISIS continues, and Pentagon to deploy the Patriot and other systems at Turkish-Syrian border 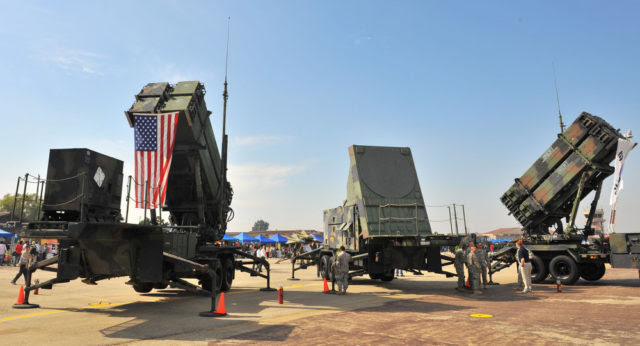 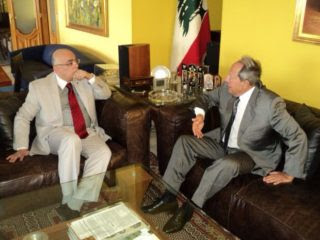 The intent of instructing them to “fabricate subversive operations inside turkey, so that Erdogan will have the European Union backing to set up a 40 K buffer zone inside the Syrian territories, extending from Jrablus to Mara’a, in the North of Aleppo hinterlands.
The European Union is currently engineering a political settlement with Turkish President Rajab Tyyp Erdogan, stipulating for reducing the number of Syrian refugees in the West in return for endorsing the Turkish buffer zone.
Erdogan joined anti ISIS international coalition as a ploy to Strike at PKK locations in Kurdistan Qandeel Mountain and in South-East Turkey.

Syrian tribal sheiks met in Qameshli to discuss Kurdish autonomy
Today, an explosion has been heard in the center of Istanbul, beside a military barrack, resulted in the injury of several people. Our sources indicate the attack was planned and executed in coordination with other  against civilians inside Syria and Iraq, part of a carefully coordinated terror offensive by Turkey and her allies against a wider number of targets soon to include Egypt, Macedonia, Armenia, Iran, Russia and Serbia. 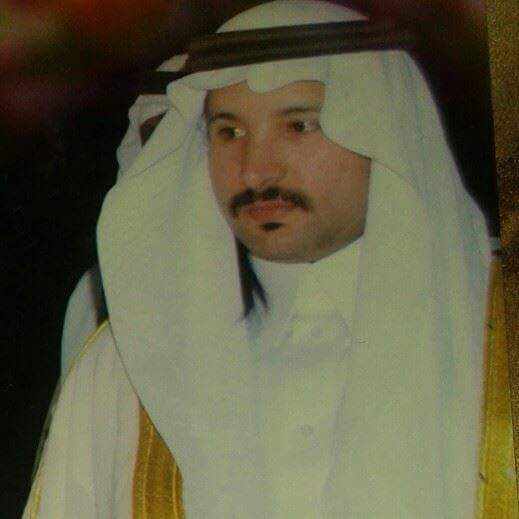 Subject: Gazi al Jarba tribal sheikh from Hasaka
A highly informed source from inside Turkey informed VT that Erdogan is a member of the Global Freemasonry Lodge which is supplying ISIS with weaponry and order the Group to pound the bordering areas to give Erdogan a pretext to make incursion into Syrian territories with the approval of the Turkish opposition.


“The Global Freemasonry Lodge seeks to ignite wars in the Middle East to keep the region in constant turbulences for the benefit of arms mongers and for the monopoly of gas and oil resources,” the source said.
“Erdogan is making up the excuses now to drag the US and the NATO to a third World War with Russia on the Syrian soil,” the source added. A highly informed Russian Source told VT “the seasoned Americans fear that eccentricity  of Erdogan may draw the US into unnecessary conflict with Russia.”
“Erdogan is currently quite capable of conducing desperate acts in Syria to get the Russians or the Syrians to attack the Turks. After all, he still hopes for the NATO involvement in this bloody conflict,” the source added.
DESI says that the Pentagon will install Patriot and other missile Systems at the Turkish-Syrian border that will include the town of Manbej, North of Aleppo for the same purpose. The US will also support the implementation of the new Middle East Map which is compatible with the Israeli scheme and the Pentagon directives, in order to scramble out of the bottle-neck dilemma. 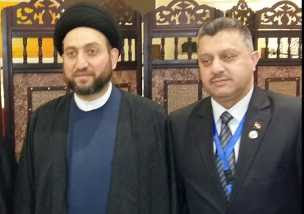 Syrian MP Sheikh Satam al Dandan with Iraqi leader Amar al Hakim
Regarding US-Russian settlement for the Syrian crisis, Bou Said said “President Assad will not bargain on the Syrian sovereignty national constants, and the fatal issues will be determined Kurd by the Syrian people.”


The US-backed Kurdish forces and other belligerent factions in North East Syria already declared a self-autonomy there. US military bases have been set up in Hasaka and Qameshli provinces for logistic reasons.
The Syrian tribes, who are devoid of any military support, cannot confront the Kurds who are armed with US and European support. The Syrian Kurdish state is an extension to Iraqi Kurdistan, which embraces US and Israeli intelligence and military bases.
Israel has always had good relations with Iraqi Kurds, especially with Masoud Al Barazani, who already declared his independence from the central government in Baghdad. However, it is speculated that the Kurds will become the “Trojan Horse” and a bargaining chip between international and regional powers which are struggling now to hammer out a political settlement for the Syrian crisis.
Finally, US-led coalition fighter jets refrained from Striking ISIS deployment lines at Iraqi-Saudi border?? It remains to be seen.