Reading between the lines it seems to me that France is in meltdown between the state of emergency, protests against draconian labour laws and what look to be riots in Muslim areas of Paris.

As I said yesterday I think there are two things going on – one reported, the other not.

News blackout of riots in Paris 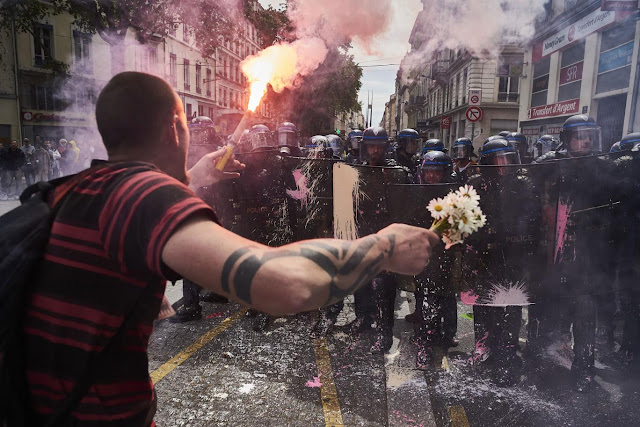 The most concerted challenge so far to reforms in French labour law produced widespread disruption and scattered violence on Thursday but failed to bring the country, or the government, to its knees.
Newspapers, ports, power stations, trains, planes, refineries, roads and bridges were targeted by strikes or blockades organised by the hard-line Confédération Générale du Travail (CGT) union federation. Demonstrations in Paris and other large cities were scarred by violent clashes between a fringe of anarchist and hard left protesters and the riot police. In one incident in Paris, a blazing supermarket trolley was propelled by hooded and masked demonstrators into a police barrier. 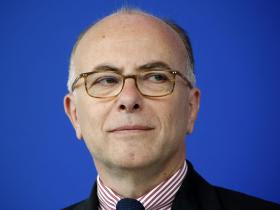 Riot police also used tear gas to disperse crowds who attacked shop fronts in central Paris. Police said on Thursday night that they had made at least 16 arrests during the disturbances in the capital.


The strikes failed, however, to paralyse the country. Most trains and planes ran normally. There were no significant power cuts.
The fuel blockade and panic buying which closed one in three filling station earlier in the week appeared, however to be worsening.
Marches against the Socialist-led government’s proposals to make French labour laws more business-friendly and less rigid attracted tens of thousands of supporters – but fewer than the organisers had hoped for.
The CGT, the largest and oldest of France’s eight different union federations, now faces an awkward choice.
The CGT has seized the leadership of a disparate movement of the traditional and hard left which bitterly opposes the labour law reforms. More moderate parts of France’s much splintered labour movement, including the second largest federation the CFDT, strongly support the changes.

Does the CGT now try to extend and harden its confrontation with the government? Or does it continue with its guerrilla actions against “economic pressure points” such as refineries and fuel depots which have caused severe problems since the weekend?

President François Hollande and his Prime Minister, Manuel Valls, also face a difficult strategic decision. Does the government hold firm and risk embarrassing disruption during the Euro 2016 international football championship which France stages for a month from 10 June? Or does it offer concessions in the hope of giving the CGT an exit strategy?
The government put out mixed signals on Thursday. The finance minister, Michel Sapin, suggested that parliament could be asked to “look again” at some aspects of the clause which most incenses the CGT: plans to allow local management-worker deals to supersede national union agreements and some aspects of national labour law.
Prime Minister Valls, backed later by President Hollande who is visiting Japan, said that there was no question of this principle being abandoned. He did, however, open the door to some “modifications” and “improvements” when the draft law comes back to the national assembly next month.
Mr Valls was mostly, however, in uncompromising mood. He said that the dispute raised the fundamental  question of who runs France, the government or the protesters. “If we withdrew these proposals, it would be an admission that this country cannot be governed,” he said. “This country is dying from the impossibility of reform.” 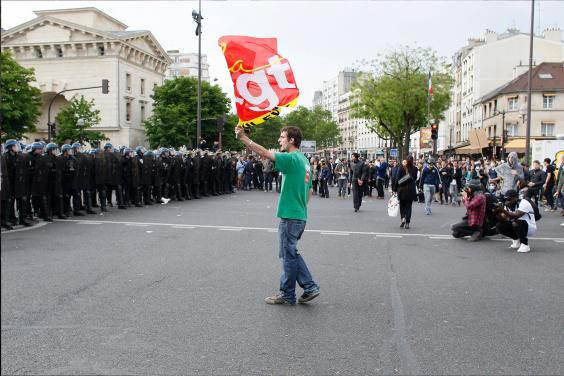 Up to 75 per cent of French people oppose the employment law reforms, according to opinion polls. Nonetheless, the unpopular Mr Hollande and Mr Valls hope that that the rare spectacle of a French government holding firm against strikes and street protests might offer some prospect of electoral salvation when the country votes for a new president and parliament next year.
Thursday’s concerted “day of action” was regarded by both sides as pivotal. On the whole, the government will have been reassured by the outcome.
Although the CGT had called out its workers in 16 out of 19 of the country’s power stations, there were no systematic power cuts. Three out of four high speed trains and six in ten other trains operated despite a CGT-inspired strike in the state owned French railways.
An air traffic control strike forced the cancellation of 15 per cent of flights at Orly and Charles de Gaulle airport in Paris. It also forced the cancellation of some flights due to cross French air space.

The shortage of petrol and diesel caused by CGT blockages at fuel depots and refineries appeared to be worsening despite the government decision to break into its three months “strategic” fuel reserves earlier this week. Up to 40 per cent of filling stations were said to be out of fuel or running very low by Thursday night.


In Paris, a group of hooded hard-left and anarchist youths broke away from the main march and smashed the windows of shops and a supermarket. The letter “A” for anarchy was sprayed in red paint on the damaged buildings.
The fringe of violent protesters also threw bottles and stones at riot police, who responded with tear-gas, stun grenades and baton charges. They shoved a blazing supermarket trolley at police lines. The main march – 18,000 strong according to police, 100,000 according to the organisers - passed off peacefully. 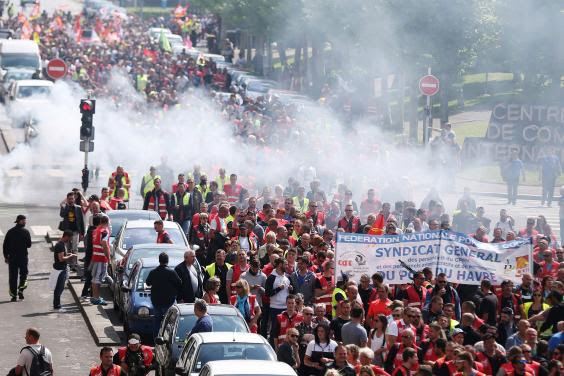 Earlier, a 51-year-old picketer was gravely injured when he was struck by a car which charged through a barricade near a refinery at Fos-sur-Mer east of Marseilles. The injured man was taken to hospital by helicopter. A 25-year-old man later surrendered to police.
Meanwhile, thousands of dock workers poured into the square in front of the city hall of the French port city of Le Havre, setting off smoke bombs throughout the area. 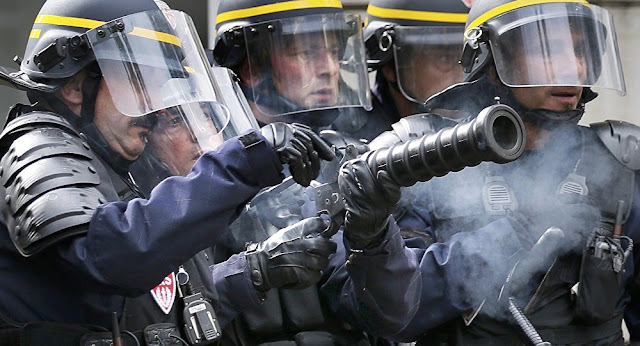 Riot police arrested 16 people and fired teargas in violent clashes with protesters marching in Paris as striking workers continued to blockade refineries and nuclear power stations in an escalating stand-off over labour reforms.

Tens of thousands of people marched across France in protest against François Hollande’s planned labour bill, which aims to make it easier for companies to hire and fire workers and was forced through parliament without a vote this month following more than ten weeks of protests.

Police fired teargas at about 100 people on the edge of a protest march through Paris. Several masked people charged shop windows, smashing them, and cars were damaged near the route of the march. There were skirmishes at Place de la Nation as riot officers cordoned off protesters, some of whom complained of heavy-handed policing.

In Caen in Normandy, the website Normandie Actu filmed what it called a case of police violence as an officer appeared to repeatedly kick a demonstrator on the ground. The police described the incident as legitimate defence.

Police estimated between 18,000 and 19,000 people took to the streets in Paris, an increase on the last national demonstration day against the labour reforms. Unions put the figure at 100,000. Street marches took place in towns and cities across France, including Toulouse, Bordeaux and Nantes. 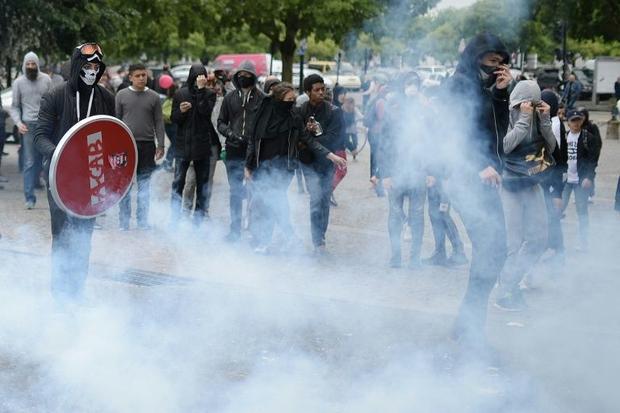 With just two weeks to go before France hosts around 2 million visitors at the showpiece Euro 2016 football tournament, the government is under increasing pressure to find an end to the dispute and stage some kind of climbdown. More disruption is expected next week and unions have called for rolling strikes on the Paris Metro to start on the day of the opening Euro 2016 football match on 10 June.

But the government vowed to stand firm and refused to abandon its reforms. The prime minister, Manuel Valls, insisted the law would not be withdrawn, but said it might still be possible to make “changes” or “improvements”. He told the Senate: “You cannot blockade a country, you cannot attack the economic interests of France in this way,” branding the CGT union “irresponsible”.

He brushed aside signs that some in the ruling Socialist party were buckling, such as the finance minister Michel Sapin, who suggested the most contested part of the legislation could be rewritten – namely a contentious clause that gives individual companies more of a free hand in setting working conditions.

Hollande has framed the labour reforms as a crucial loosening of France’s famously rigid labour protections, cutting red-tape and slightly tweaking some of the more cumbersome rules that deter employers from hiring. This would, he argued, make France more competitive and tackle stubborn mass unemployment that tops 10% of the workforce.

But after more than two months of street demonstrations against the labour changes, the hardline CGT union has radically intensified its strategy and is now trying to choke-off the nation’s fuel supply to force Hollande to abandon the reforms it sees as a betrayal of workers’ rights.

Members of the CGT union continued to insist they wanted the reforms scrapped entirely, not merely modified. “It’s inadmissible,” Arnaud Pacot of the CGT union in the Aube region of eastern France told BFM TV from a nuclear plant being blocked by activists.

A third of petrol stations across France were empty or dangerously low on fuel after several days of blockades at refineries. 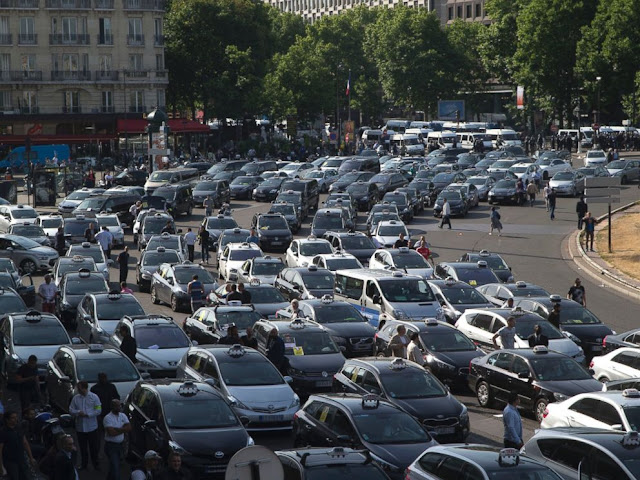 The government has started using its strategic fuel reserves and forcing depots to reopen, but supplies are still limited and purchases are being rationed. Five of the country’s eight refineries are still either halted or operating at reduced capacity.

Many motorists were still in long queues around petrol stations across France. Companies ranging from gardeners and hauliers to florists trying to deliver flowers for French Mother’s Day this weekend complained about the impact on business.

The CGT said all but three of France’s 19 nuclear power stations had voted to stop work in a country that gets 75% of its electricity from nuclear power. RTE, the body overseeing the national power network, said the stoppages had not had an immediate effect on the electricity supply, but “if it worsens, it will have an impact on the management of the network”.