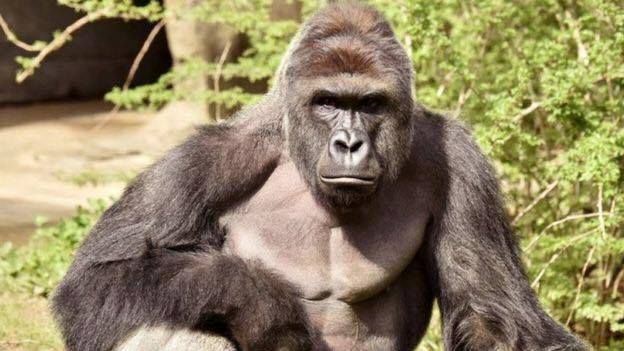 Harambe is dead because an irresponsible and negligent mother allowed her 4-year old son to fall into a Gorilla enclosure.

Think about that for a moment.

This mother allowed her “4-year old ” son to climb over a fence and approach a 15 foot drop onto a concrete floor. Forget about the fact that there was a gorilla down there, what the hell was she doing while her child made his way towards what could be a fatal fall.

She should be charged with criminal negligence and child abuse.

As a parent I find it incomprehensible that another parent would stand there and do nothing but scream. I would have immediately and without hesitation have jumped into that enclosure to protect my child, no matter the risks and It would not have been the gorilla that would worry me but rather the consequence of the 15-foot drop. But again as a parent I can’t even imagine how a 4-year old child was able to wander away . Was she texting someone or chatting on her cell phone?

Now this woman wants us to respect her privacy. She thanked the Lord for delivering her baby back to her. Well woman, it was not the Lord. Harambe was trying to help your child until some idiots with guns decided to settle the issue the way most police and security in America tend to settle an issue – with deadly force.

Harambe is dead, a day after his 17th birthday, because the people who run the Cincinnati Zoo are grossly incompetent. If they had any knowledge and understanding about lowland gorillas they would have quickly observed that Harambe meant no harm to the child and was in fact protecting him.

What we saw was an incredible act of compassion by a gorilla for a human child. An act of kindness and concern that was rewarded with a bullet.

Harambe is dead because of a bunch of ignorant human gawkers kept screaming, thus motivating the horrific response. Where were the keepers? Surely they could see that Harambe was not behaving violently. What kind of ignorant and incompetent cowards do they have working at that damn zoo anyhow?

Harambe is dead because zoos are no place for wild animals to be imprisoned.

Harambe should have been in the lowland jungles of Africa, with his own kind doing what gorillas were born to do and that means being a gorilla, not some character in a freak show so a bunch of gawking ignorant anthropocentric hominids can stare, tease, laugh, and take selfies.

I swear it is incidents like these that make me see how utterly pathetic and clueless human beings can be.

The killing of Harambe was cold-blooded, unprovoked and senseless murder and the fingers of those who pulled the trigger belong to a special kind of stupid.

The zoo feebly tried to defend the shooting in a release where they stated: “The gorilla was violently dragging and throwing the child.”

This was not what eye witnesses saw and the proof that this statement is a lie is the very fact that the child was released from the hospital shortly after, unharmed, and if a 400 pound gorilla was actually being violent there is no way that child would have remained unharmed.

Harambe died because we enslave gorillas and other animals for our entertainment.

Predictably the zoos trotted out their go-to apologist Jack Hanna to proclaim that the zoo did the right thing, that it was a choice between a gorilla and a human being.

No it was not. The kid was not going to be killed by this gorilla. In fact there is no case of a gorilla in captivity ever killing a child and these gorillas are actually approachable in the wild.

But Jack Hanna gets paid to spew such nonsense because if he actually knew anything about gorillas he would have understood what Harambe was trying to do.

And what about the child whose hand Harambe gently held in his own? What kind of trauma will this boy experience from seeing the gentle being who tried to help him gunned down because a few pathetic individuals wanted to pretend Harambe was King Kong and the they were stupidly trying to save Faye Wray.

What brings tears to my eyes, what makes me sick inside is the knowledge that this noble creature was trying to help, that he knew the child was in trouble and his compassion was contemptuously dismissed with bullets.

I feel pity for the boy, because for the next 14 years or so he will have to live with this woman and with the knowledge that because she allowed him to fall into that enclosure Harambe, the kindly creature that held his hand, is now dead.

Added comment. Thane Maynard the zoo director said that despite the boy's ability to climb over the barrier, the exhibit is safe. "People can climb over barriers, and that's what happened." Now that is a really asinine comment. If it was safe the boy would not have fallen in. The incident demonstrated that it is not safe. When a 4 year old can get into an enclosure with any animal at a zoo, the security at the zoo is seriously flawed.

Posted by seemorerocks at 17:42