US Special Forces on the ground in Syria

Caught on Film: US Special Forces Fighting on Ground in Syria 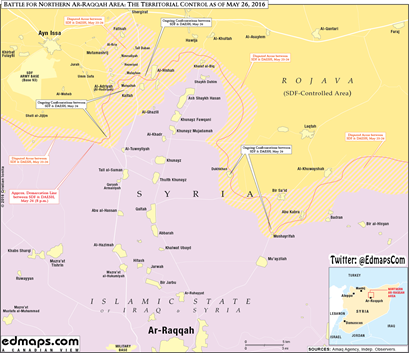 Today Agence France-Presse published shock photos of US Special Forces troops engaged in combat inside Syria with the US-backed, mostly-Kurdish "Syrian Democratic Forces" as they moved toward the ISIS "capital" of Raqqa. The Pentagon has insisted that US troops in Syria -- numbering upwards of 300 -- play only an “advise and assist” role to the US-backed group, made up mostly of Kurdish YPG forces, but the AFP photos demonstrate clearly that the US forces are engaged in the fight.

The Washington Post reports that the US Special Forces were, "clustered around what appears to be an advanced Mk.47 40mm automatic grenade launcher. The system, built by General Dynamics, is primarily used by Special Operations units and has not been widely sold outside the United States."

A member of the Kurdish militia confirmed that US troops were actively engaged, according to AFP reporting:

SDF field commander Hawkar Kobane told AFP that 'US forces are taking part in this operation' alongside his own troops.

'On the rooftop of this house, there are US forces using (anti-tank) TOW missiles to fire on the explosives-rigged cars that Daesh [ISIS] is using to attack the SDF.'

The US troops were wearing insignia of the YPG forces.

US NATO ally Turkey is likely to be furious over US troops fighting alongside the YPG, which Turkey considers a terrorist group aligned with Kurdish PKK forces. It is unclear what role the Kurdish forces are expected to play should they participate in the liberation of Raqqa from ISIS control. Would Turkey allow such an expansion of Kurdish territory? Would the US look the other way if Turkey again begins bombing YPG forces? Would the US demand Turkey to cease and desist? The possibilities of a very awkward and potentially dangerous escalation arising from such close US/Kurdish cooperation are very high.

Pentagon spokesman Peter Cook insisted that the US troops clearly engaged in combat were not engaged in combat. “They are in an advise-and-assist mission. They are not on the front lines," he said. That denial rings quite hollow next to the AFP reporting -- along with photos -- from the scene.

It must be remembered that the presence of US military forces inside Syria is contrary to both US and international law, as they have not been invited by the internationally-recognized Syrian government nor have they been authorized by the US Congress. It is an illegal and highly risky military operation.
Posted by seemorerocks at 20:18