Iran Blames Israel, US For Assassination Of Top Nuclear Scientist

RT,
27 November, 2020
Leading Iranian nuclear scientist Mohsen Fakhrizadeh-Mahavadi was fatally injured in an ambush on his car outside the capital Tehran on Friday, before dying from his injuries in hospital, Iran’s Defense Ministry has confirmed.

“Unfortunately, the medical team did not succeed in reviving him, and a few minutes ago, this manager and scientist achieved the high status of martyrdom after years of effort and struggle,” the statement said.

Fakhrizadeh was attacked during an armed clash between his bodyguards and unknown assailants in Absard city, Tehran province, Mehr News reported. The attack involved at least one explosion and a shootout, it added.

The scientist was rushed to hospital by helicopter after the attack, but died from his injuries.

The Atomic Energy Organization of Iran first denied the claims, with spokesman Behrouz Kamalvandi saying that all nuclear scientists were “safe.”

Fakhrizadeh and his bodyguard were reportedly targeted by a “suicide” attacker at the entrance of Absard town.

The scientist was struck by gunfire after his car was stopped by an explosion at Mostafa Khomeini Boulevard, according to IFP news agency. Several other people were also reportedly killed in the incident, it added, but that has not been officially confirmed.

Images released to the press showed the exploded wreckage of one vehicle and a second bullet-marked car, in which the scientist was traveling.

Fakhrizadeh, a professor of physics at the Imam Hussein University, was also alleged to be the head of Iran’s nuclear weapons program.

Iran’s Revolutionary Guards has not commented on the attack specifically, but vowed in a statement on Friday to avenge the deaths of nuclear scientists.

No one has claimed responsibility for the assassination. However, in a tweet, Foreign Minister Javad Zarif said “terrorists murdered an eminent Iranian scientist today,” and accused Israel of playing some part in the killing.

Tehran has repeatedly insisted its nuclear program only has peaceful goals. The International Atomic Energy Agency, whose inspectors monitor Iranian nuclear sites, also said that the ‘Amad’ program ended in the early 2000s.

Netanyahu’s office has not commented on the attack on the Iranian scientist, at the time of writing. 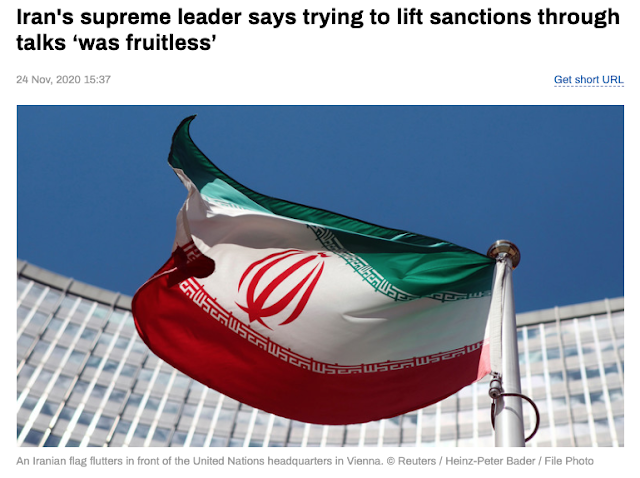 Supreme Leader of Iran Ayatollah Ali Khamenei has dismissed the “path of negotiations” with Western states to lift sanctions. However, the government in Tehran says foreign companies are already preparing to return to the country.

Speaking at the Supreme Council of Economic Coordination’s meeting in Tehran on Tuesday, Khamenei said that the only way to counteract sanctions is to “nullify and overcome” them.

“We tested that way of lifting the sanctions through negotiations one time, but it was fruitless,” the supreme leader stressed.

Western states “interfere in regional affairs, they tell us not to intervene,” he said.

And while Britain and France have nuclear missiles, they tell us not to have missiles. What does it have to do with you? You should first correct yourselves.

Sanctions were “a crime committed by the US and its European partners,” Khamenei said, adding that this “has intensified over the past three years.”

Khamenei urged the nation to continue its resistance against sanctions, explaining that Iran’s economic problem is not about what approach to take but is “diligence, courage and serious effort.” 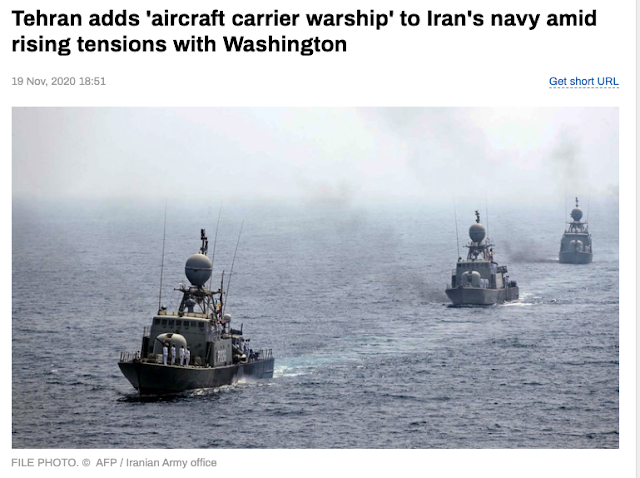 Iran Blames Israel, US For

Update 2: Iran accused Israel and the U.S. of organizing the assassination of one of its top nuclear scientists on Friday and vowed revenge, sharply escalating tensions in the Persian Gulf in the final weeks of Donald Trump’s presidency. Mohsen Fakhrizadeh was the head of research and innovation at Iran’s Ministry of Defense, and was also viewed internationall as the head of Iran's nuclear weapons program. He was killed close to the Damavand campus of Islamic Azad University, about 60 kilometers east of central Tehran, Iran's Tasnim news reported.

Zarif urged the international community to condemn the attack, while the head of Iran’s armed forces, Major General Mohammad Bagheri, called for the assassination to be avenged. Four other Iranian nuclear scientists have been killed since 2010, with Tehran blaming the intelligence agencies of its arch foes, Israel and the U.S.

As noted below, Israel’s prime minister had singled out Fakhrizadeh in an April 2018 presentation he gave on Iran’s nuclear program, claiming that the scientist was the director of a secret project to develop nuclear weapons. The United Nations nuclear watchdog, the International Atomic Energy Agency, has said “Project Amad” was mothballed in 2003, and Iran dismissed Netanyahu’s presentations at the time as “lies and war-mongering.”

The assassination, which comes at a time when Joe Biden has expressed an interest in resetting relations with Iran and has said the U.S. could re-enter the nuclear agreement if Iran returns to compliance, is likely to trigger the sort of popular anger that followed the January assassination of Iranian General Qassem Soleimani in a U.S. drone strike ordered by Trump. Iran fired missiles at bases housing American troops in Iraq in response to that attack, causing no fatalities but raising fears of a slide to war between the two adversaries.

According to Bloomberg, the office of Israeli Prime Minister Benjamin Netanyahu declined to comment, as did officials at the Pentagon. The Central Intelligence Agency didn’t immediately respond to questions about whether the U.S. had knowledge of plans to carry out an assassination.

Update 1: while there was some initial confusion if Fakhrizadeh had been killed on location, or merely wounded, with Reuters reporting that "Fakhrizadeh was injured in an assassination attempt near Tehran on Friday and was being treated in a hospital" moments ago Iran's state media has confirmed that - one way or another - he is now dead:

"Unfortunately, the medical team did not succeed in reviving (Fakhrizadeh), and a few minutes ago, this manager and scientist achieved the high status of martyrdom after years of effort and struggle," Iran’s armed forces said in a statement carried by state media.

And in keeping with the sudden escalation in what until recently was a relatively dormant conflict, Iran's military has vowed to avenge the killing:

Amid speculation that Israel is on war footing over a possible strike in Iran in the coming weeks, moments ago Iranian state media reported that the country's top nuclear scientist Mohsen Fakhrizadeh was assassinated in Damavand, east of Tehran. He was reportedly accompanied by his bodyguard when they were attacked by a “suicide” attacker at the entrance of Absard town.

According to Iran Front Page News, Fakhrizadeh was killed by shooting, but before the shootout, his car has been stopped with an explosion at Mostafa Khomeini Blvd. Several others are also reportedly killed in the incident, but haven’t been identified yet.

He was a professor of physics at the Imam Hussein University in Tehran and was former head of Iran's Physics Research Center.

While there has been no official confirmation of the death yet, and Iran Atomic Energy organization has denied the reports, saying that no incident involving nuclear scientists took place according to ISNA News Agency, Iran's revolutionary guards commander wrote on Twitter that Iran will avenge the killing of scientists as it has in the past according to the Jerusalem Post.

No one has yet claimed responsibility for the assassination, but the Israeli regime has a history of hiring hit men to assassinate nuclear scientists in Iran.

In 2018, Prime Minister Benjamin Netanyahu said "remember that name" after he announced that the Mossad had obtained 100,000 files from Iran's secret nuclear archives. The files retrieved by Mossad focused on the secret Iranian nuclear program that was developed from 1999 to 2003 called Project Amad, which was led by Fakhrizadeh. When Iran entered the 2015 nuclear deal, it denied that such a program existed.

After the April 2018 killing of several nuclear scientists in Iran, a "protective shield of secrecy and security" had been thrown around Fakhrizadeh, in an effort to protect him against Israeli assassins.

In 2003, Iran was forced to shelve Project Amad, but not its nuclear ambitions. It reportedly split its program into an overt program and a covert one that continued the nuclear work under the title of scientific knowhow development, Netanyahu said at the time. It continued this work in a series of organizations, which in 2018 were led by SPND, an organization inside Iran’s Defense Ministry led by the same person who led Project Amad – Mohsen Fakhrizadeh, Netanyahu said.

According to the WSJ, Fakhrizadeh is often described as Iran’s Robert Oppenheimer, the developer of the world’s first atomic bombs, and not because of the Iranian’s latent pacifist convictions. His name came to light about a decade ago as the elusive head of Iran’s Organization of Defensive Innovation and Research, widely believed to be the group conducting Iran’s nuclear-weaponization work. In 2012 the Journal’s Jay Solomon reported that, after lying low for a few years, Fakhrizadeh had “opened a research facility in Tehran’s northern suburbs involved in studies relevant to developing nuclear weapons.” 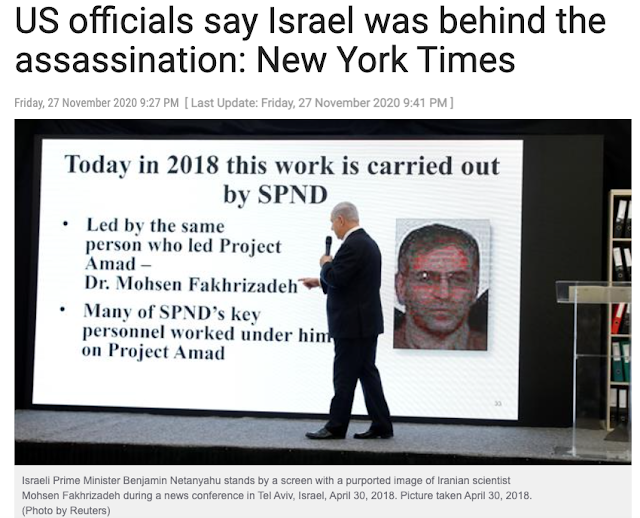 Three US officials have said that Israel was behind the assassination of Iranian scientist Mohsen Fakhrizadeh in a terrorist attack near the capital Tehran, according to a report.

“One American official — along with two other intelligence officials — said that Israel was behind the attack on the scientist,” The New York Times reported on Friday.

“It was unclear how much the United States may have known about the operation in advance, but the two nations are the closest of allies and have long shared intelligence regarding Iran,” it added.

Fakhrizadeh,59, had been targeted on Friday in a multi-pronged attack involving at least one explosion and small fire by a number of assailants in Absard city of Damavand County, Tehran Province.

Iranian Foreign Ministry Mohammad Javad Zarif roundly condemned the terror attack, saying there were “serious indications” of the Israeli regime’s role in the assassination of Fakhrizadeh, a professor of physics at Imam Hussein University of Tehran.

“Terrorists murdered an eminent Iranian scientist today. This cowardice—with serious indications of Israeli role—shows desperate warmongering of perpetrators,” he said in a tweet.

The top Iranian diplomat called on the international community, especially the European Union, to “end their shameful double standards & condemn this act of state terror.”

Fakhrizadeh’s name was mentioned multiple times in a presentation in 2018 by Israeli Prime Minister Benjamin Netanyahu, during which he repeated baseless claims about the Iranian nuclear program. 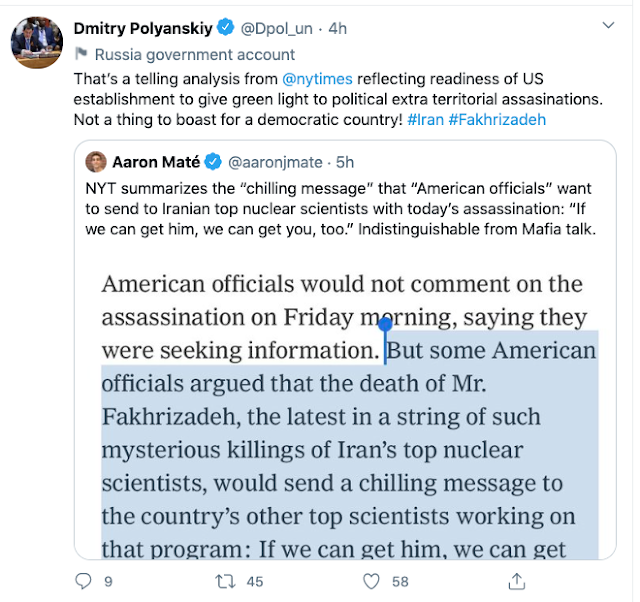