You could read through the entire article and miss it. 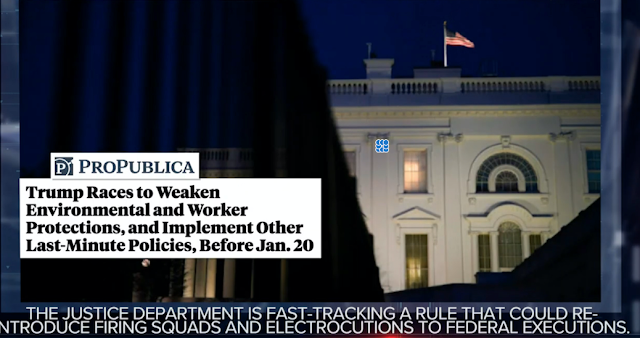 Six days after President Donald Trump lost his bid for reelection, the U.S. Department of Agriculture notified food safety groups that it was proposing a regulatory change to speed up chicken factory processing lines, a change that would allow companies to sell more birds. An earlier USDA effort had broken down on concerns that it could lead to more worker injuries and make it harder to stop germs like salmonella.

Ordinarily, a change like this would take about two years to go through the cumbersome legal process of making new federal regulations. But the timing has alarmed food and worker safety advocates, who suspect the Trump administration wants to rush through this rule in its waning days.

... One proposal has raced through the process with little notice but unusual speed — and deadly consequences. This rule could reintroduce firing squads and electrocutions for federal executions, giving the government more options for administering capital punishment as drugs used in lethal injections become unavailable. The Justice Department surfaced the proposal in August and accepted public comments for only 30 days, instead of the usual 60. The rule cleared White House review on Nov. 6, meaning it could be finalized any day. The Justice Department didn’t respond to a request for comment.

Once finalized, this rule might never be put into practice. The Trump administration executed a federal prisoner in Indiana on Nov. 19 and plans five more executions before Jan. 20, all with lethal injections. After that, Biden has signaled he won’t allow any federal executions and will push to eliminate capital punishment for federal crimes.