Tetanus vaccine may be laced with anti-fertility drug

I was sceptical of this statement by Dr. Carrie Madej until I found the item below. 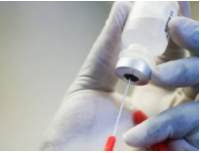 This article is of relevance to the ongoing debate on vaccines.

It was first published in February 2015

According to LifeSiteNews, a Catholic publication, the Kenya Catholic Doctors Association is charging UNICEF and WHO with sterilizing millions of girls and women under cover of an anti-tetanus vaccination program sponsored by the Kenyan government.

The Kenyan government denies there is anything wrong with the vaccine, and says it is perfectly safe.

The Kenya Catholic Doctors Association, however, saw evidence to the contrary, and had six different samples of the tetanus vaccine from various locations around Kenya sent to an independent laboratory in South Africa for testing.

The results confirmed their worst fears: all six samples tested positive for the HCG antigen. The HCG antigen is used in anti-fertility vaccines, but was found present in tetanus vaccines targeted to young girls and women of childbearing age. Dr. Ngare, spokesman for the Kenya Catholic Doctors Association, stated in a bulletin released November 4:

“This proved right our worst fears; that this WHO campaign is not about eradicating neonatal tetanus but a well-coordinated forceful population control mass sterilization exercise using a proven fertility regulating vaccine. This evidence was presented to the Ministry of Health before the third round of immunization but was ignored.” (Source.)

Dr. Ngare brought up several points about the mass tetanus vaccination program in Kenya that caused the Catholic doctors to become suspicious:

Dr. Ngare told LifeSiteNews that several things alerted doctors in the Church’s far-flung medical system of 54 hospitals, 83 health centres, and 17 medical and nursing schools to the possibility the anti-tetanus campaign was secretly an anti-fertility campaign.

Why, they ask does it involve an unprecedented five shots (or “jabs” as they are known, in Kenya) over more than two years and why is it applied only to women of childbearing years, and why is it being conducted without the usual fanfare of government publicity?

“Usually we give a series three shots over two to three years, we give it anyone who comes into the clinic with an open wound, men, women or children.” said Dr. Ngare.

But it is the five vaccination regime that is most alarming. “The only time tetanus vaccine has been given in five doses is when it is used as a carrier in fertility regulating vaccines laced with the pregnancy hormone, Human Chorionic Gonadotropin (HCG) developed by WHO in 1992.” (Source.)

UNICEF: A History of Taking Advantage of Disasters to Mass Vaccinate

It should be noted that UNICEF and WHO distribute these vaccines for free, and that there are financial incentives for the Kenyan government to participate in these programs. When funds from the UN are not enough to purchase yearly allotments of vaccines, an organization started and funded by the Bill and Melinda Gates Foundation, GAVI, provides extra funding for many of these vaccination programs in poor countries. (See: Bill & Melinda Gates Foundation Vaccine Empire on Trial in India.)

Also, there was no outbreak of tetanus in Kenya, only the perceived “threat” of tetanus due to local flood conditions.

These local disasters are a common reason UNICEF goes into poorer countries with free vaccines to begin mass vaccination programs.

Health Impact News reported last year that UNICEF began a similar mass vaccination program with 500,000 doses of live oral polio vaccine in the Philippines after a Super Typhoon devastated Tacolban and surrounding areas. This was in spite of the fact there were no reported cases of polio in the Philippines since 1993, and people who have had the live polio vaccine can “shed” the virus into sewage systems, thereby causing the actual disease it is supposed to be preventing. (See: No Polio in the Philippines Since 1993, But Mass Polio Vaccination Program Targeted for 500,000 Typhoon Victims Under Age 5.)

A very similar mass vaccination with the live oral polio vaccine occurred among Syrian refugees in 2013, when 1.7 million doses of polio vaccine were purchased by UNICEF, in spite of the fact that no cases of polio had been seen since 1999. After the mass vaccination program started, cases of polio began to reappear in Syria. (See: Are UNICEF Live Polio Vaccines Causing Polio Among Syrians? 1.7 Billion Polio Vaccines Purchased by UNICEF.)

It seems quite apparent that UNICEF and WHO use these local disasters to mass vaccinate people, mainly children and young women. Massive education and propaganda efforts are also necessary to convince the local populations that they need these vaccines.

Here is a video UNICEF produced for the tetanus vaccine in Kenya.

Notice how they use school teachers and local doctors to do the educating, even though the vaccines are produced by western countries.

At least in Kenya, Catholic doctors are acting and taking a stand against what they see as an involuntary mass sterilization campaign designed to control the population of Africans.

Health service delivery forms an integral part of evangelization for the Catholic Church. As such, the role played through the Church’s health Apostolate in Kenya cannot be understated.

The Church has an extensive network of health facilities that include 58 hospitals, 83 health centers, 311 dispensaries and 17 medical training institutions. Our health facilities offer a wide range preventive and curative health services, including vaccination. The Catholic Church coordinates these services through the Catholic Health Commission of Kenya – Kenya Conference of Catholic Bishops (KCCB).

The Catholic Health Commission of Kenya, currently meeting at St Patrick’s Pastoral Center Kabula in Bungoma, with health facility managers from 24 Catholic Dioceses are deeply concerned about the following issues regarding the Tetanus vaccination campaign scheduled for of 13th – 19th October 2014:

We are still keen on having the Ministry of Health give Kenyans adequate responses to the following key pertinent questions:

We are not convinced that the government has taken adequate responsibility to ensure that Tetanus Toxoid vaccine (TT) laced with Beta human chorionic gonadotropin (b-HCG) sub unit is not being used by the sponsoring development partners. This has previously been used by the same partners in Philippines, Nicaragua and Mexico to vaccinate women against future pregnancy. Beta HCG sub unit is a hormone necessary for pregnancy.

When injected as a vaccine to a non-pregnant woman, this Beta HCG sub unit combined with tetanus toxoid develops antibodies against tetanus and HCG so that if a woman’s egg becomes fertilized, her own natural HCG will be destroyed rendering her permanently infertile. In this situation tetanus vaccination has been used as a birth control method.

We retain that the tetanus vaccination campaign bears the hallmarks of the programmes that were carried out in Philippines, Mexico and Nicaragua. We would want to participate in ensuring that the vaccines to be administered are free of this hormone.

The Catholic Church acknowledges that maternal and neonatal care is imperative in prevention of death; the Church therefore maintains that adequate and clear information is provided to the general public to avoid misinformation and propaganda in regard to the vaccine.

The sanctity of Life and the dignity of the human person must always be priorities in health care and the Catholic Church, in the absence of proper and adequate information will not shy away from raising moral questions on matters affecting human life. 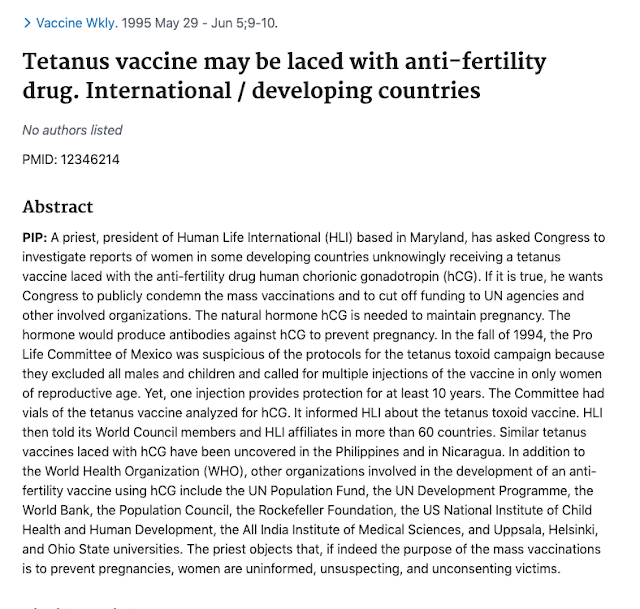