The case for a "Trump coup" narrative

I am posting this garbage as is.

Imagine a coup attempt by an incumbent president against someone who is 100% fraud.

If I was Rip van Winkle and was waking up from a long sleep and did not know about months of riots followed by revelations of a corrupt leader taking kickbacks from Ukraine and the CCP through his crackhead son and then a totally fraudulent election I may have been tempted to take this Trotskyist publication (who historically have had scant regard for democratic elections unless it is to further their agenda) at its word. 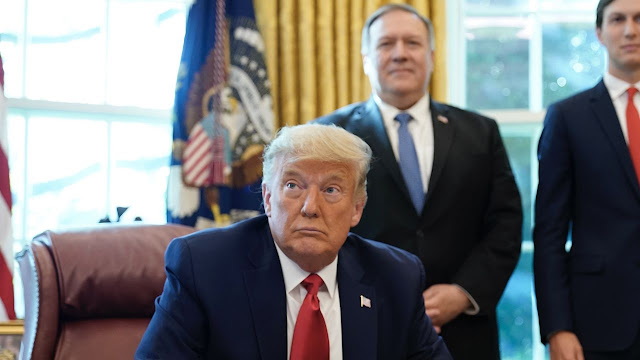 November 22, 2020 "Information Clearing House" - - "WSWS" - In the midst of the attempt by US President Donald Trump to nullify the 2020 election by means of an extra-constitutional coup, neither Biden and the Democrats, nor the US corporate media, have seen fit to alert the American and world public to ominous developments within the US military and its Pentagon command.

The outlines of this coup have come into sharp focus in the past few days. This is not a matter merely of Trump’s intentions, but rather of actions aimed at executing this coup that are being carried out in real time.

Trump’s invitation to the White House Friday of Michigan Republican state legislators has laid bare a definite strategy for establishing a presidential dictatorship. Trump and his supporters are carrying out an aggressive propaganda campaign to delegitimize the election with lying allegations of ballot fraud and increasingly fascistic conspiracy theories in order to provide a pretext for Republican-controlled statehouses in states like Michigan to repudiate the popular vote and select slates of pro-Trump electors.

They are counting on this extralegal operation ending up in the US Supreme Court, where fully one-third of the justices are Trump appointees, and a precedent has already been established by the 2000 decision in Bush v. Gore, which stopped the popular vote count in Florida and awarded the presidency to Republican George W. Bush, with no opposition from the Democratic Party.

Such a brazen attempt to overturn an election will inevitably provoke explosive resistance, particularly in the heavily working-class urban areas where millions cast their ballots to drive Trump from office. Such an assault on core democratic rights and the last vestiges of constitutional forms of rule cannot be executed without a resort to overwhelming repression.

It is in this context that a ceremony held Wednesday at the Fort Bragg, North Carolina headquarters of the US military’s Special Operations Command—comprised of the Army’s Green Berets, the Navy’s SEALs and other elite killing squads—serves as a deadly warning. The new “acting” Secretary of Defense Christopher Miller announced the elevation of the Special Operations Command to a status on a par with the existing branches of the armed forces, the Army, Navy, Air Force, etc.

As the well-connected military website breakingdefense.com explained the shakeup: “The crux of the transformation will ensure that the top special operations official at the Pentagon can go directly to the Defense Secretary on ... operational matters, including secret raids against high-value targets. The office will no longer have to move through the larger DoD Policy apparatus to reach the secretary.”

Miller, who has refused to answer any questions from the media since being installed as Pentagon chief, told an audience of assembled troops, “I am here today to announce that I have directed the Special Operations civilian leadership to report directly to me, instead of through the current bureaucratic channels.”

Miller has not been confirmed, and will not be confirmed, by the US Senate to an office he has held for little more than a week. A retired colonel and 30-year Special Forces officer, he has no qualifications to hold the post outside of his unswerving loyalty to Trump.

Under normal circumstances, Miller would be surrendering his office to a Biden appointee in barely two months and, in the interregnum, would be collaborating closely with his incoming replacement. Instead, he is announcing the most far-reaching change in the military chain of command in recent memory.

Miller’s installation as defense secretary is the result of a wholesale purge of the top civilian leadership at the Pentagon that Trump initiated with the firing-by-tweet of Secretary of Defense Mark Esper. Trump’s determination to oust Esper dates back to last June, when the US president deployed federal security forces and US troops to suppress anti-police-violence demonstrations near the White House and threatened to invoke the Insurrection Act in order to send troops into the streets across the country to put down the mass protests provoked by the police murder of George Floyd in Minneapolis.

Esper, a former lobbyist for the arms industry, voiced his opposition, saying that such a domestic deployment of the US military to suppress the American population could be ordered only as a “last resort.” His position, shared by Joint Chiefs of Staff Chairman Gen. Mark Milley, expressed fears that such a use of US troops would provoke uncontrollable resistance and tear the military apart. Since his ouster, Esper, Milley and the fired number-three official at the Pentagon have all issued statements pointedly reminding US military personnel that they have sworn an oath to the Constitution.

Such invocations will have no effect on the cabal of Trump loyalists and semi-fascists that have been placed in charge at the Pentagon since the election. Miller made it clear in a confirmation hearing for another national security post that he had no compunction against using federal intelligence resources to pursue protesters at the order of the White House.

The new civilian head of Special Operations, who will now enjoy direct and secret collaboration with the defense secretary, unencumbered by “bureaucratic channels,” is one Ezra Cohen-Watnick, 34, an extreme right-wing operative. He was brought onto the National Security Council by virtue of his political connections to the likes of Trump’s fascistic former adviser Steve Bannon, the fanatically anti-Iranian and indicted ex-National Security Advisor Gen. Michael Flynn and the president’s son-in-law Jared Kushner.

Named to the number-three post at the Pentagon, undersecretary for policy, is retired general and frequent Fox News commentator Anthony Tata, whose previous nomination for the post had to be withdrawn after it emerged that he has denounced Obama as a “terrorist leader,” a “Manchurian candidate" and a Muslim.

A similar figure has been named as Miller’s chief adviser, retired Army Col. Douglas Macgregor, another Fox News commentator known for denouncing European countries for admitting “unwanted Muslim invaders” bent on “turning Europe into an Islamic state.” He has also condemned attempts in Germany to come to terms with the Holocaust as a “sick mentality” and called for martial law and the summary execution of migrants on the US-Mexican border.

Trump has made a particular appeal to the Special Operations forces that have now been elevated in status within the chain of command. He aggressively intervened last year in the court martial of Navy Seal Eddie Gallagher for war crimes in Iraq, protesting, “We train our boys to be killing machines, then prosecute them when they kill!”

At the close of his campaign, just five days before the election, Trump flew to Fort Bragg for closed-door meetings with Special Forces troops and their commanders. Given subsequent developments, there is every reason to believe that the purpose of this trip was to assess the level of his support within the military units stationed there, and among their commanders, and to discuss plans for an armed response to an explosion of resistance to his plans to steal the election and establish a presidential dictatorship.

The tactics being employed by the Trump White House have been rehearsed countless times abroad under both Democratic and Republican administrations. Fabricated claims of election fraud have been used to justify US-backed coups, oust presidents and foment “color revolutions” from Honduras, Bolivia and Venezuela to Ukraine and Georgia.

Now these same methods are being brought “home” under conditions of an insoluble economic and social crisis, characterized above all by staggering levels of social inequality and exacerbated by the COVID-19 pandemic and the homicidal “herd immunity,” back-to-work policy of the capitalist ruling class.

The Democratic Party is well aware of Trump’s maneuvers and threats. There has been a stream of contacts between Biden's transition team and the Pentagon, no doubt to assess the attitude of the military to Trump’s coup plotting. The widely reported discussions between the Biden camp and former Trump defense secretary James Mattis, a retired Marine Corps general with wide contacts throughout the officer corps, are only the tip of the iceberg.

Former president Barack Obama said Wednesday night that in response to Trump’s intransigent refusal to concede the election, “I think we can always send the Navy SEALs in there to dig them out.” While presented by the media as a joke, this remark confirms that, in the final analysis, the Democrats rely on the military, rather than popular opposition, to remove Trump from office. Such an outcome would make the military the arbiter of American politics.

Far more than the threat of a coup and dictatorship, Biden and the Democratic Party fear an eruption of popular protest and mass resistance from below against Trump and his co-conspirators. Whatever their tactical differences with Trump, they represent the interests of Wall Street and the military-intelligence apparatus.

The working class must intervene in this unprecedented crisis as an independent social and political force, opposing the conspiracies of the Trump White House and its military allies through the methods of class struggle and the fight for the socialist transformation of society.