COVID-19 tiers: 99% of England placed in Tiers 2 and 3 as new system revealed

The tiers have been strengthened from the original rules in place before lockdown, with many more areas in the higher tiers.

99% of the population in England will live under the toughest two tiers of the country's new lockdown system, it has been revealed.

Warrington and Liverpool are the only two places in the country which will face eased restrictions from 2 December - both are moving from Tier 3 of the previous lockdown system to Tier 2.

ndoor entertainment venues will also be closed, with people urged to avoid travelling outside the area other than where necessary.

In Tier 2, there should be no mixing of households indoors apart from support bubbles, with the rule of six applying outdoors.

Pubs and bars must close unless operating as restaurants, while hospitality venues can only serve alcohol with substantial meals.

In Tier 1 the rule of six applies indoors and outdoors, with people urged to work from home if they can and pubs limited to table service.

The announcement of the tiers descended into chaos when an online postcode checker was launched before Health Secretary Matt Hancock formally revealed the details, although it crashed within minutes of coming online.

In a move aimed at assuaging anger from local leaders and Conservative MPs, Boris Johnson has promised that the tier allocations will be reviewed on 16 December.

But a number of Tories have already said they will vote against the new tiers next week, including 1922 Committee chairman Sir Graham Brady, Bournemouth East MP Tobias Ellwood and Poole MP Sir Robert Syms.

Steve Baker, deputy chairman of the COVID Recovery Group which has been critical of lockdown restrictions, said the "authoritarianism at work today is truly appalling".

"The government must publish its analysis of the impact interventions are likely to have on controlling COVID, as well as the non-Covid health impact and the impact on society, people's livelihoods and businesses," he said.

Sir Roger Gale, MP for the Kent constituency of North Thanet, criticised the decision to place all of the county in Tier 3, telling Sky News he fears people will "skip over the boundary" to go to a nearby pub in Tier 2.

In a bid to soften the blow for Tier 3 areas, ministers are promising them access to rapid-result COVID-19 tests to help bring down infections, as well as cash subsidies.

Extra cash will also be on offer to areas placed into Tier 2 and Tier 3.

The health secretary said "these are not easy decisions, but they have been made according to the best clinical advice".

Matt Hancock told MPs: "Thanks to the shared sacrifice of everyone in recent weeks, in following the national restrictions, we have been able to start to bring the virus back under control and slow its growth, easing some of the pressure on the NHS.

"We will do this by returning to a regional tiered approach, saving the toughest measures for the parts of the country where prevalence remains too high."

Downing Street has denied that economic factors played a part in the decision-making process, with the prime minister's spokesman saying: "We have based tiers on the criteria that we have set out.

"We have been clear on the criteria that we have based the tiering system on and you have got the WMS [written ministerial statement] that explains the rationale for each area."

Mr Johnson's spokesman added that the government expects the public to continue to follow the rules, saying: "I think what you've seen throughout the pandemic is the public's will to abide by the restrictions and play their role in driving down the virus.

Labour's shadow health secretary Jon Ashworth said the nation is "still in the tunnel" despite the light offered by vaccines, telling the Commons: "We have a significant way to go to drive infection rates down and keep our constituents safe.

"We understand why tough restrictions are still needed, but let's be clear: today millions of people trying to survive in the second lockdown will soon be forced to endure further local lockdown restrictions."

The Confederation of British Industry said some businesses would be left "hanging by a thread" under the new rules.

"For many businesses in England, going into toughened tiers while waiting for a vaccine will feel like suspended animation," UK policy director Matthew Fell said.

Greater Manchester Andy Burnham told Sky News that he "can see why" the area has been placed into Tier 3, but that the restrictions hit hospitality "far too hard".

"This is some of the poorest parts of the country that we are talking about. Cities, particularly outside of London and many in the North, will be very, very hard hit indeed by hospitality being closed in December.

"Many of the businesses will not make it through to the new year."

London mayor Sadiq Khan welcomed news that the capital will be moved back into Tier 2, having previously been in Tier 3, telling Sky News it was the "right decision".

But he added there was "no room for complacency" among Londoners.

Joe Anderson, mayor of Liverpool, said it was good news that the area was once again in Tier 2, but warned: "We must remain vigilant and ensure this tentative step back to semi-normality is sustained."

The areas in Tier 3 are:

The areas in Tier 2 are:

• Essex, Thurrock and Southend on Sea

Just three areas are in Tier 1: 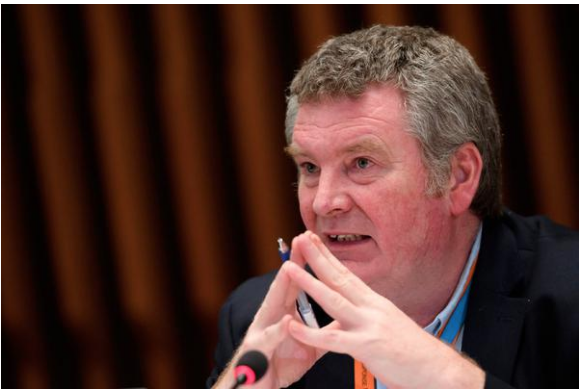 Keeping Covid-19 at bay this Christmas may require the wearing of masks in the home, limiting numbers in the kitchen and going for walks instead of gathering around the television, according to the leading Irish official at the World Health Organisation.

Dr Michael J Ryan said the “small choices” people make could mean the difference between passing on the virus and keeping elderly and immunocompromised relatives safe. 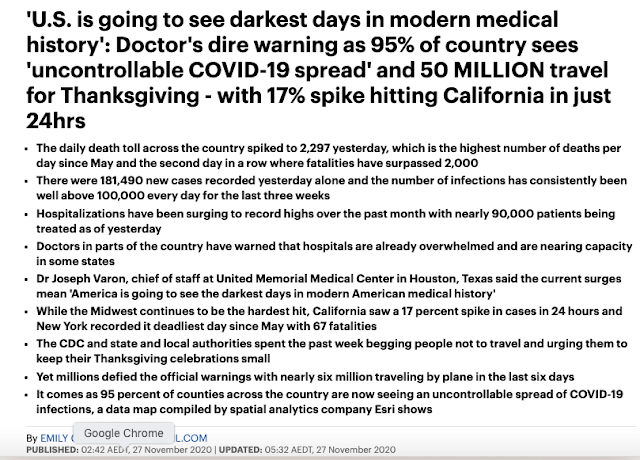 Doctors are warning that the US will see the 'darkest days in modern medical history' in the weeks after Thanksgiving as the daily COVID-19 death toll hits the highest since May and hospitalizations continue to surge to record highs.

Millions of Americans took to the skies and the highways in the days leading up to Thanksgiving despite the risk of pouring gasoline on the coronavirus fire as they disregarded increasingly dire warnings to avoid travel and events.

With cases, hospitalizations and deaths already skyrocketing across the US, health officials are warning the worst is yet to come given the true impact of Thanksgiving travel and gatherings won't be seen for a few weeks.

The daily death toll across the country spiked to 2,297 yesterday, which is the highest number of deaths per day since May and the second day in a row where fatalities have surpassed 2,000.

Health officials have been warning for weeks that deaths, which are a lagging indicator, would increase after the number of cases and hospitalizations started surging in late September.

There were 181,490 new cases recorded yesterday alone and the number of infections has consistently been well above 100,000 every day for the last three weeks.

Hospitalizations have been surging to record highs over the past month with nearly 90,000 patients being treated as of yesterday.

While the Midwest continues to be the hardest hit, California saw a 17 percent spike in cases in 24 hours and New York recorded it deadliest day since May with 67 fatalities. 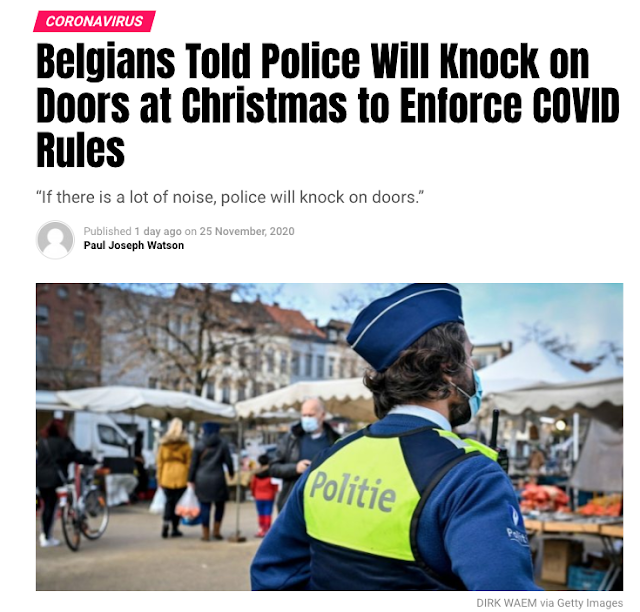 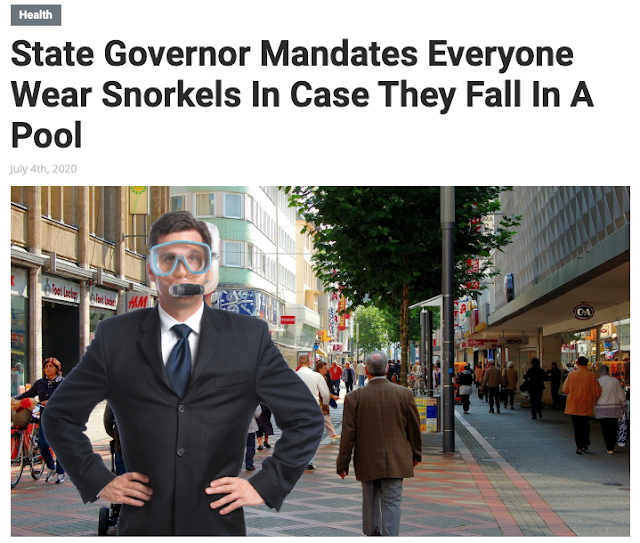 U.S.—As governors clamor to follow the ways of SCIENCE and save lives in their state, one state governor has read some very scary statistics from SCIENCE and decided to go the extra mile to protect the safety of his citizens. "Starting today," he said, "All citizens of my state will be required to wear a snorkel at all times, both indoors and out. This will prevent thousands of tragic deaths resulting from people falling in their backyard pools. SCIENCE says we must do this."

Every person in the state will be required to wear a snorkel, preferably paired with goggles, 24 hours a day. When pressed as to why they were necessary indoors, the governor replied, "Hello! Sinks? Bathtubs? Showers? There are water hazards everywhere inside the house! We can't be too careful! SCIENCE!"

According to the order, anyone caught without a snorkel will be required to pay a $15,000 fine or face 8 years of jail time. Second offenders will be shot on sight. "We must do this to save lives and obey SCIENCE!! We are in this together," the state governor exclaimed before tripping on a microphone cord and falling headfirst into the press pool.

https://babylonbee.com/news/state-governor-mandates-everyone-wear-snorkels-in-case-they-fall-in-a-pool
Posted by seemorerocks at 15:29