Patrick Byrne is a libertarian and has never voted for Donald Trump.

Patrick M. Byrne (born November 29th, 1962) is an American entrepreneur who was the CEO of Overstock.com. In 1999, Byrne launched Overstock, after leading two smaller companies, including one owned by Warren Buffett's Berkshire Hathaway.[2]

In 2002, Byrne took Overstock.com public. Since its initial public offering, Overstock.com has increased revenue to almost $1.8 billion, while achieving profitability in 2009.[3]

In 2005, Byrne became known for his campaign against illegal naked short selling. Byrne and securities regulators maintain illegal naked shorting has been used in violation of securities law to distort prices of public companies' stock.[4] Under his direction, Overstock.com filed two lawsuits alleging improper acts by Wall Street firms, a hedge fund, and an independent research firm.[5] In each case the defendants have settled with Overstock out of court.

Byrne has advocated for cryptocurrencies such as bitcoin.[6] In January 2014, Overstock.com became the first major online retailer to accept bitcoin.[7] Patrick Byrne, the former CEO of Overstock.com, went on with Christopher McDonald of “The McFiles” to discuss the “drop and roll” strategy Democrats used to steal the 2020 election from President Donald Trump.

President Trump set all new records for a sitting US president in a presidential election.  President Trump’s coattails were deep and wide, winning at least 14 GOP seats in the US House, holding the senate and picking up seats in several state legislative bodies.

But it wasn’t enough to beat Joe Biden.  As we previously reported Democrats used the “Drop and Roll” technique to steal the states they needed for an improbable win with a senile candidate who hid in his basement all year.

We posted on the “drop and roll” technique last week.

Patrick Byrne discussed this technique with Christopher McDonald, “The used the ‘drop and roll’ technique. .. I think the Democrats have a long history of using black people in very pernicious ways… They’re using the black people as they have done for so many years… At a certain point in the election counting they essentially freeze and see how many ballots they need to get up over the guy who is actually winning and from then on they just set, whatever new batch that comes in is pre-figured.  There are some states where they found 53 data points in a row.  This will all be revealed in charts that will be coming public tomorrow.”

Patrick Byrne says there is ENOUGH EVIDENCE to overturn the election! 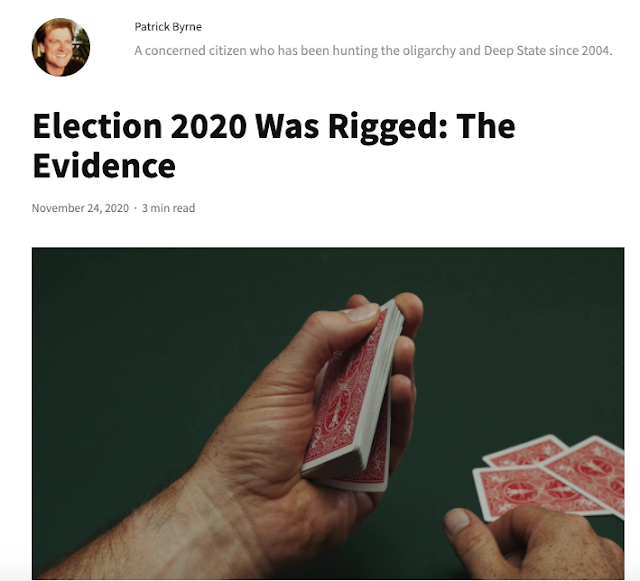 Decisive (but not widespread) election fraud occurred on November 3:

Conclusion: The US 2020 election was wildly compromised: it is an egg that can’t be unscrambled.

[1] Dominion’s servers are widely infected with QSnatch malware. As poll-workers (e.g., administrators) log-in, QSnatch steals their credentials. Thus not only can administrators override (with no audit trail) election security in a precinct, so can anyone who steals those credentials (which, given the ubiquity of QSnatch on Dominion servers, happens everywhere). Dominion sends out software patches that continuously (deliberately?) allow QSnatch to beat their patches.

[3] By way of example: Sharpie/Bic switcheroos experienced in Maricopa precincts reflect a wish to generate a large pool of “adjudicated ballots” for administrators, who could drag-and-drop them later to Candidate Biden.

*Pardon bad formatting. Have been tweaking it but I delayed long enough getting this live. I have continued expanding this though November 24.