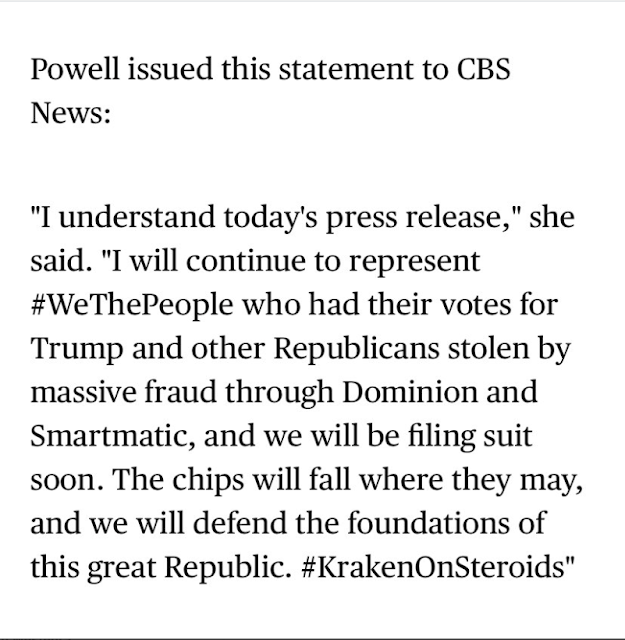 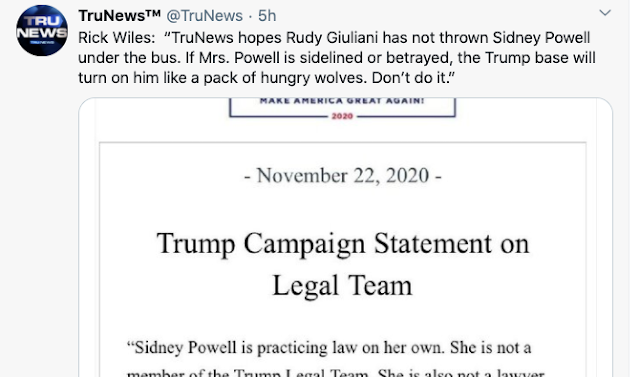 "The Chips Will Fall Where They May": Sidney Powell Responds To Trump Distancing, Will Forge Ahead With Dominion Lawsuit

Update (1955ET): Sidney Powell has responded to the Trump Campaign's Sunday night announcement that she was not part of their legal team, telling CBS News "I understand today's press release. I will continue to represent #WeThePeople who had their votes for Trump and other Republicans stolen by massive fraud through Dominion and Smarmatic, and we will be filing suit soon.

Powell continues, "The chips will fall where they may, and we will defend the foundations of this great Republic," and ends with the hashtag #KrakenOnSteroids.

The Trump Campaign issued a Sunday evening statement to clarify that attorney Sidney Powell, who has promised to unleash a 'biblical' election lawsuit in Georgia, is not part of the campaign's legal team.

Trump Campaign general counsel Jenna Ellis tweeted a joint statement with Rudy Giuliani which reads: "Sidney Powell is practicing law on her own. She is not a member of the Trump Legal team. She is also not a lawyer for the President in his personal capacity."

The announcement comes on the heels of a Saturday interview Powell gave to Newsmax, during which she said an upcoming election lawsuit in Georgia "will be biblical."

"Georgia's probably going to be the first state I'm gonna blow up," she told the conservative news network, adding "We've got tons of evidence. It's so much, it's hard to pull it all together."

"Hopefully, this week we will get it ready to file, and it will be biblical."

Powell then claimed that Georgia Governor Brian Kemp and Secretary of State Brad Raffensperger were being paid as part of a conspiracy with Dominion Voting Systems.

"And Mr. Kemp and the secretary of state need to go with it because they're in on the Dominion scam with their last-minute purchase or reward of a contract to Dominion of $100 million," Powell alleged, while encouraging Georgia law enforcement officials to investigate.

Powell claimed at a press conference last week, standing next to Giuliani and Ellis, that Dominion Voting Systems machines had flipped millions of votes in favor of former Vice President Joe Biden - a claim she presented no evidence for, which has divided the MAGA camp between those demanding receipts (she notably bailed on an appearance with Tucker Carlson), and those who say she should be given time to assemble her case and present it in court.

Earlier Saturday, Trump attorney Jordan Sekulow hinted on Newsmax that there would be a "shocking" lawsuit filed in Georgia.

Some on team MAGA did not respond kindly to the Trump Campaign's statement.

Others have noted that Ellis herself tagged Powell as a member of the team:

The Washington Post, meanwhile (so take with appropriate grains of salt) is reporting that Trump told his advisers Powell was 'too much' for him, and doesn't view her as helpful anymore.

Statement — And It’s NOT

As we suspected, the news this evening about Sidney Powell not being on the Trump team is an act to protect Sidney and the Trump team and not a message of disappointment in her latest interviews and actions at all.

The Trump campaign issued a statement Sunday night announcing Sidney Powell is not a member of President Trump’s legal team.

Powell had appeared at a campaign legal team press conference earlier this week alongside Giuliani and Ellis.

Attorney Sidney Powell was not able to respond tonight.Sidney was censored and suspended by Twitter earlier today.

Sidney is staying the course to prove the massive deliberate election fraud that robbed the American people of our votes for President Trump and many Republican candidates.

General Michael Flynn’s son, Mike Jr., followed up with a message tonight on Parler noting that the earlier message from the President’s team is not a reflection of any misstatements on Sidney’s part: 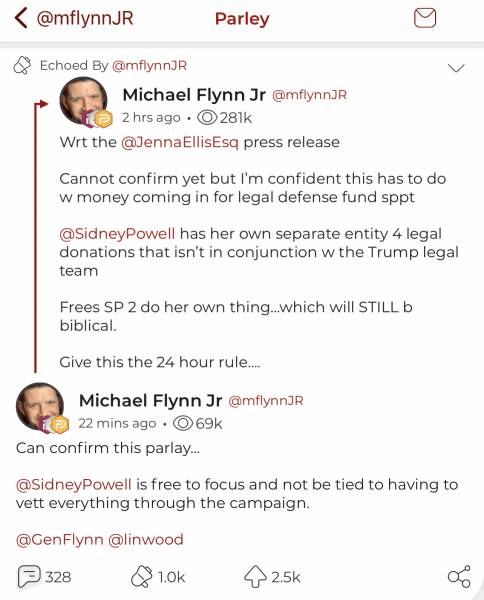 One view. I have no idea who this is.
Posted by seemorerocks at 19:32