Shanghai Pudong Airport has placed an emergency lock-down at around 8 p.m. today to force the mandatory nucleic acid testing (NAT) on site. The airport P4 parking building has been completely closed, the crowd filled the entire building chaotically.

According to the posts from WeChat Moments Message, Shanghai Municipal Center For Disease Control & Prevention (SCDC) has issued an emergency notification that required all the airport agents to do the nucleic acid testing at P4 parking building by 12 a.m.. According to Pudong International Airport (PVG) flight information, the departure flights have been widely cancelled.

Besides, CCP has started to maintain stability on the Internet. The videos with the chaotic scene has been deleted by them once posted on Weibo. 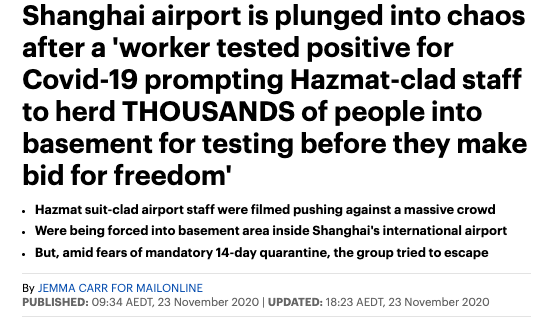 An airport in China was plunged into chaos last night after a worker tested positive for Covid-19 prompting officials to order airport-wide testing, witnesses claim.

Hazmat suit-clad staff were filmed herding a huge crowd into a basement area inside Shanghai Pudong International Airport in the country's financial hub.

But, amid fears of mandatory 14-day quarantine, the group staged a mass bid for freedom.

They were filmed pushing as the officials - wearing plastic face shields - linked arms to keep them in line.

Other clips showed a surge of people trying to escape via a ramp as heavily-outnumbered workers attempted to hold them back.

Workers in full protective gear were ushering airport staff into a multi-storey car park to have the virus test, with scores of people filing into the facility.

More than 17,700 people had been swabbed by Monday morning in the drive to test airport cargo staff, the official Xinhua news agency reported, and results had come back negative on over 11,500 so far.

Shanghai has reported six local infections linked to the airport this month, with most of the cases in the past few days.

On Monday authorities said two cargo handlers at the airport who tested positive earlier this month had entered and cleaned a container arriving from North America - without wearing masks - in late October.

On Friday, a positive case in Shanghai was found after mass testing following infections of a security inspector at Pudong International Airport and his wife.

Posted by seemorerocks at 19:47