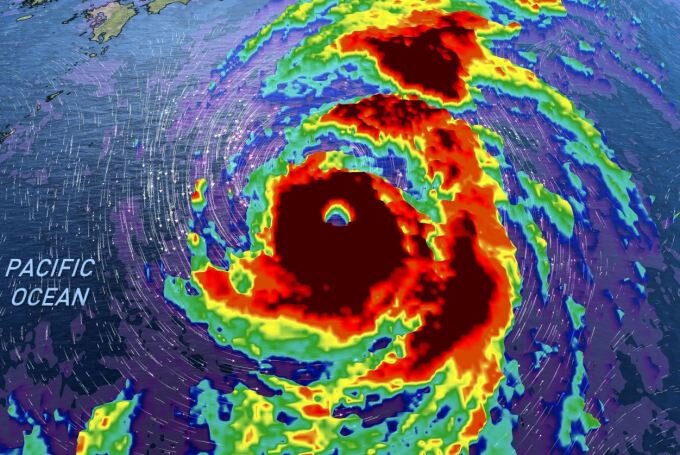 Fukushima Daiichi’s radioactive waste is on the move again as Hagibis, the worst typhoon to hit Japan since 1958, dropped 30” of rain in 24 hours and millions of people were forced to evacuate due to flooding.
From the minute we learned of this Super Typhoon threat, we were gravely concerned for the people of Japan and the tons of highly radioactive debris sitting on the edge of the volatile Pacific Ocean on the former site of the six Fukushima Daiichi atomic power reactors. Three of those nuclear power plants had meltdowns in March 2011 leaving more highly toxic radioactivity than anyone ever anticipated having in one spot. Some of that poisonous debris has been raked up and confined to thousands of giant 1-ton jumbo plastic bags that were right in the path of Hagibis.  As we watched the news of the approaching Pacific super typhoon (tropical cyclone) with its 150 mile per hour (mph) winds, we worried for the people of Japan who have already faced the worst nuclear disaster on the planet. 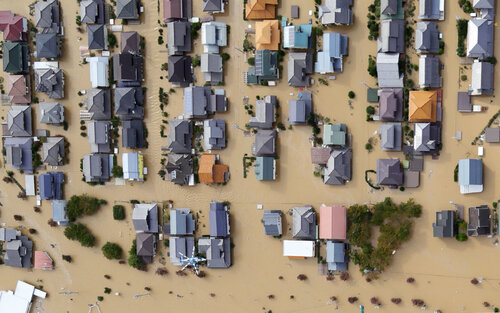 Since these events are just beginning to unfold, the amount of radioactive material released into the Pacific Ocean and surrounding environment is unknown as of Monday morning, October 14.
As reported by MSN news:
Contaminated waste from damaged nuclear plant in Fukushima swept away by Typhoon Hagibis
… the city of Tamura in Fukushima Prefecture said Sunday that an unknown number of bags containing contaminated waste from the plant were lost. Officials say heavy rains carried the bags to the nearby Furumichi River. That river connects to another river and flows into the Pacific Ocean. The city retrieved ten bags from the river but they haven't been able to confirm how many went missing out of the more than 2-thousand 6-hundred bags kept in a temporary storage.
Now, government authorities in Japan have begun the arduous task searching for an unknown number of bags of radioactive waste that were swept away by Super Typhoon Hagibis.  Each bag weighs more than one ton; the plastic material of which they were fabricated was anticipated to last only 5 to 7 years before the toxic debris would require a final dumping place, a temporary storage facility, or new bags to assure no leakage of the poisonous dirt and vegetation within. 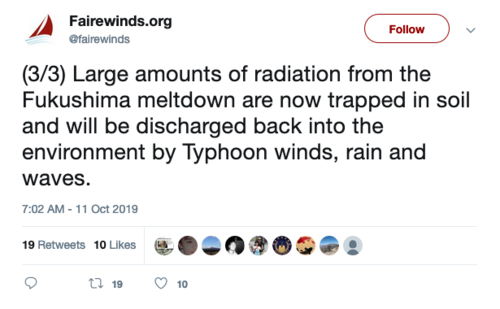 Readers of the Fairewinds twitter feed will note that on Friday we expressed real concern about the status of Fukushima Daiichi and its highly radioactive dirt and debris in the face of this climate crisis weather event.
Unfortunately, our worst fears from Friday are true.  While damage reports are understandably still very incomplete, here is a video of one nuclear waste storage area that was undermined by heavy rain, spilling its radioactive contents into a river that runs into the Pacific Ocean.

Even more disturbing is this report from the New York Times:
Was the nuclear reactor at Fukushima struck?
In Fukushima Prefecture, where a huge earthquake and tsunami caused the Daiichi nuclear power plant to melt down in 2011, a burst levee flooded the banks of the Abukuma River after heavy rains.
Separately, Tokyo Electric Power said it was inspecting the nuclear plant for damage from the heavy rains.
In the city of Tamura, floodwaters displaced huge bags containing contaminated waste gathered during the cleanup of areas around the Fukushima Daiichi nuclear plant, Kyodo News reported. A river washed away an unknown number of the bags, which were in a temporary storage area, it said.
The contents of the bags, which hold up to 1.3 tons, were unclear, but they are most likely filled with irradiated topsoil and other refuse from the cleanup that followed the meltdown. Ten of the bags were recovered undamaged, Kyodo News said, and the authorities are cataloging the remaining ones to see how many were still missing.”
While a first read of this story may seem to repeat the previously quoted story of bags being washed away, what we at Fairewinds find additionally disturbing is that a levee (dam) has also burst. It is well known that enormous amounts of radioactive material from the Fukushima meltdowns have settled on the bottom of stream beds and behind levees throughout Japan. As this and other levees and dams burst, they will release even more of that radiation into swollen streams and rivers where it will settle anew in crop lands and populated areas that were previously thought to be cleaned.
Our concern is magnified because people and animals cannot see, taste, or smell this migrating radioactivity. If we look at the radioactively contaminated dirt, trees, and vegetation dispersed by this super typhoon, it will not look any different from any other river mud or debris, so people and animals will not know that it is contaminated with the most toxic substances known to humans. As our tagline says “Radiation Knows No Borders,” and unlike an oil spills, plastics, and some chemical leaks, there is no color or smell for anyone to know they should watch out!
This is a developing story, and since the meltdowns in 2011, Fairewinds has kept you informed, and we and our colleagues will continue to do so. 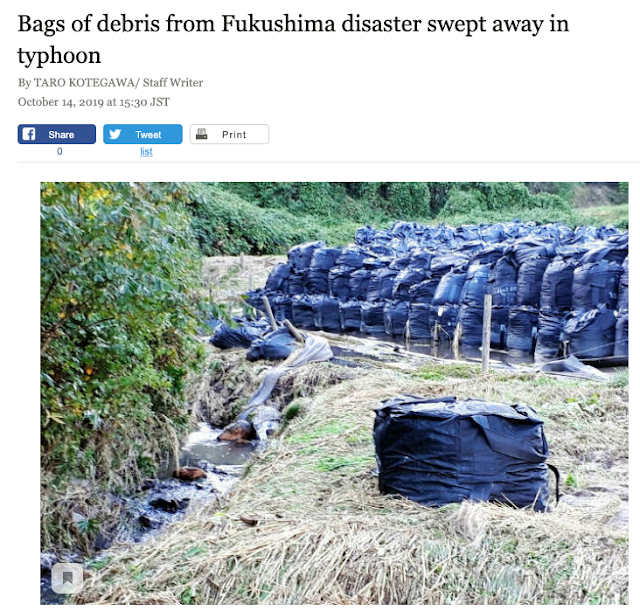