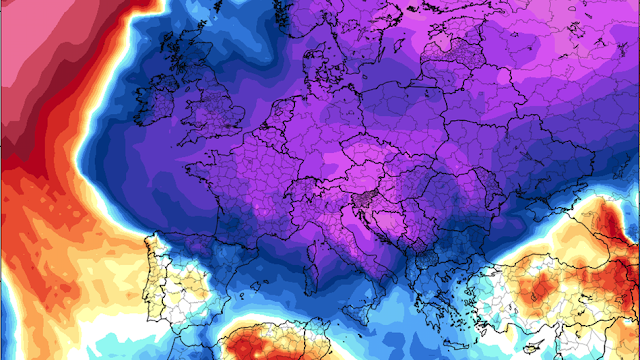 The temperature at a weather station at the very top of Greenland, at one of the closest points of any land mass to the North Pole, has risen above the freezing mark of 32 degrees Fahrenheit, or 0 degrees Celsius, during the past two days.

This is an unusual, though not unheard of, occurrence, and it illustrates the extreme weather pattern currently unfolding in the Northern Hemisphere.

Right now, unusually high temperatures are flooding the Arctic from the Pacific side to the North Atlantic side. Sea ice extent is at record low levels, with the likelihood that another record low winter peak in sea ice extent could be set by the end of March.

Sea ice loss is wreaking havoc on Arctic ecosystems. Missing sea ice cover exposes coastal villages to flooding from high waves during storms, and makes it harder for subsistence hunters to catch seals and other traditional sources of meat. It also threatens iconic species such as the polar bear. The unusually mild (but still rather cold)  temperatures in the Arctic are also related to a recent split in the polar vortex. The polar vortex is a semi-permanent area of low pressure in the upper atmosphere, with swirling westerly winds circulating around it. Typically, those winds are strong enough to keep the coldest air bottled up in the Arctic during the winter.

But during the past two weeks, a phenomenon known as a Sudden Stratospheric Warming event took place that disrupted the polar vortex, as if hitting a spinning top with your hand, causing it to wobble more slowly and erratically. 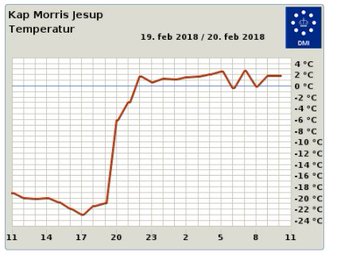 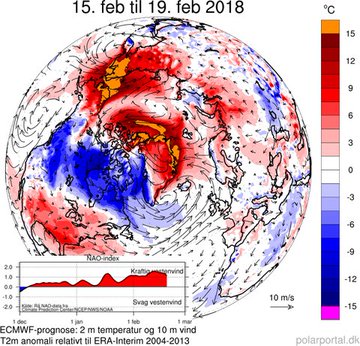 Greenland@greenlandicesmb
The world's northernmost land based weather station @dmidk's #KapMorrisJesup has consistently measured at or above 0C for the last 12 hours.
Extraordinary weather in the high #Arctic right nowhttp://www.dmi.dk/groenland/maalinger/vejret-lige-nu/stations/vis/4301 …http://polarportal.dk/vejr/aktuelt-vejr/ …

In this case, the polar vortex has actually split into two sister vortices, or two spinning tops, to extend the analogy.

One section of the polar vortex has set up shop over the Western U.S., where record cold temperatures are being set, along with heavy snowfall. Another is spinning its way across Eurasia, and is likely to cause snow to fall from Siberia to the Mediterranean beaches of Italy, France, and Croatia.

The cold could set records across Europe, including in the United Kingdom, as easterly winds bring bitter cold into the region from Eurasia. The UK Met Office calls the frigid air mass associated with these easterly winds the "Beast from the East." The Met Office has also linked the coming cold snap directly to the Sudden Stratospheric Warming event. 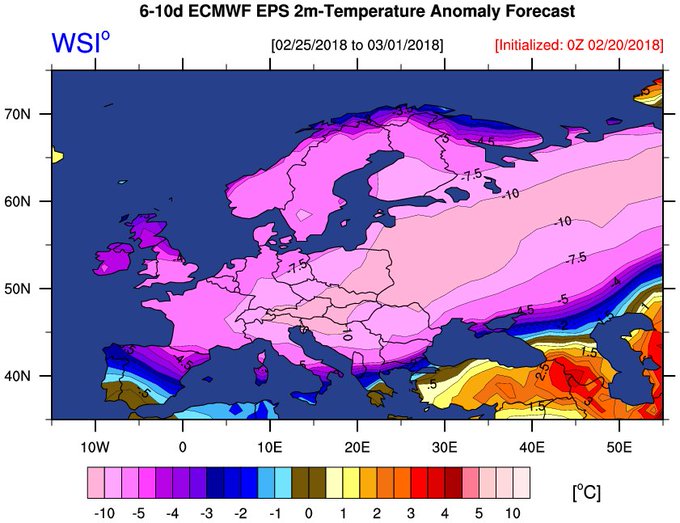 Barney colors across Europe + Russia in the 6-10d period.
3:25 AM - Feb 21, 2018 · Andover, MA
Sudden Stratospheric Warming events occur when energy propagates upward from the troposphere, where most weather occurs, into the stratosphere, setting in motion a complex series of events that can result in the polar vortex temporarily spilling beyond its usual boundaries, bringing exceptional cold far and wide. This February's stratospheric warming event was particularly extreme, possibly setting records for how sharply temperatures spiked in the upper atmosphere.
Soon after these events, cold air outbreaks tend to occur in Eurasia and parts of North America, often delayed by a week or two.
Adam Scaife, a meteorologist at the UK Met Office Hadley Center, said the Sudden Stratospheric Warming event could keep Europe, including the UK, in the grips of frigid air through early March.
“Signs of this event appeared in forecasts from late January and last week we saw a dramatic rise in air temperature of around 50 degrees Celsius, known as a Sudden Stratospheric Warming, at around 30km above the North Pole," Scaife said in a statement. "This warming results from a breakdown of the usual high-altitude westerly winds and it often leads to a switch in our weather: with cold easterly conditions more likely to dominate subsequent UK weather.”
There's another player in the picture, too, which is also raising the odds of extreme cold across Europe, and possibly some snowstorms for the U.S. East Coast in early March as well. A pattern of atmospheric pressure over the North Atlantic Ocean, known as the North Atlantic Oscillation (NAO), is flipping into a particular phase that excites snow lovers on both sides of the Atlantic Ocean. 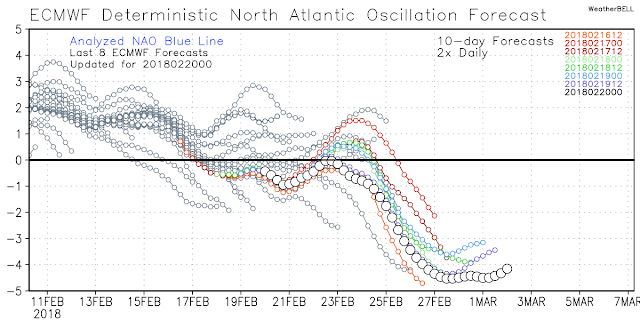 When the NAO shifts into the negative phase, as it's predicted to do, the odds of cold conditions along with more chances of snowstorms are likely both in Europe and the eastern U.S. Computer models are showing a steep, possibly even record, drop in the NAO index during the next two weeks, which also supports the idea of a deep freeze in Europe.

It's possible that the East Coast of the U.S. will eventually get in on the colder, snowier weather, but not until after a late February heat wave affects the area this week, with temperatures more in line with typical values seen during the month of May.