I have not encountered an early-summer like this ever - there has been no sun for weeks and temperatures are up to 8C cooler than average.

A Motueka fruit growers association says the millions of dollars worth of fruit that is ruined following a devastating hail storm that hit the Nelson region yesterday is a bitter pill to swallow. Richard Clarkson, president of the Motueka Fruit Growers Association, said some growers, depending on where they are based, had lost their entire crop due to the storm.

He said the storm had wiped out so much fruit that the labour shortage crisis was somewhat averted.

"There's orchards out there that are going to be in that 80 to 100 percent loss of crop, which is huge in terms of income," Clarkson said.

"We're not only talking apples, but we're talking about kiwifruit [and] hop growers, which have been hit quite hard It's widespread, and you'll find even some of the local vegetable growers have been hit as well."

Clarkson said the storm would cost "millions of dollars", with the district and entire country feeling the impact.

"We only get one bite at the cherry of earning money as orchardists, especially apples, kiwifruit and hops. We only have one opportunity a year to make money, and that's once it's picked and sold.

"For a lot of us we won't know what that looks like until we get through out the other side and assess the damage."

Clarkson said growers had begun to assess the damage, which would take two or three days to fully get across.

"As growers, we're going to have to look at which blocks we walk away [from], what we do with the fruit currently on the tree.

"Anything that's been lightly hit with hail takes a good couple of days to see the impact on fruit, but where we've got heavy damage you can see it now."

He said growers already had spent a significant amount of money getting the crop to where it was, from winter pruning to spring spray season.

The storm follows what Clarkson said had been a "challenging" year for growers.

While they were allowed to operate during the Covid lockdowns, he said getting labour into the country and complying with alert levels regulations had been difficult.

Meanwhile, Tasman District councillor Barry Dowler said the storm has delivered a sad end to the year for the region.

"There's going to be a lot of people not getting the employment they normally would," Dowler said.

"Unfortunatley there's been quite a few business buildings damaged as well with the weight of the hail after the buildup in the spoutings."

He said that meant some people would not be allowed to return to their worksites, until assessors could look at the damage.

He hopes the government will step in and assist hard-hit growers. 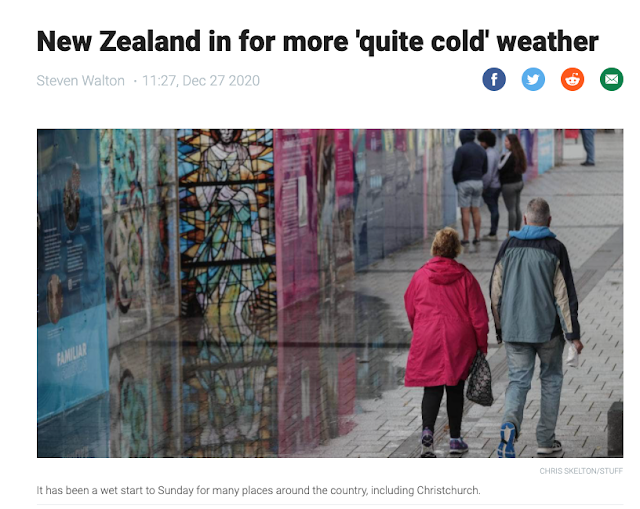 New Zealanders hoping to see the year out with sunny weather are all out of luck – as most of the country continues to feel the consequences of a cold front.

MetService meteorologist Mmathapelo Makgabutlane said the day would be “quite cold" for most of the country.

“Those temperatures will be noticeably cooler than what they’ve been over the last couple of weeks," she said.

Wellington is only forecast to reach 13 degrees Celsius, while a grey and rainy Christchurch is only expected to hit 15 degrees