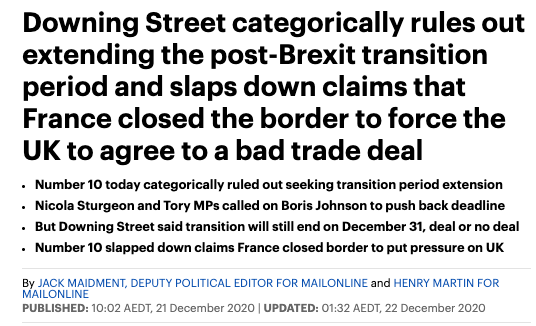 Downing Street today categorically ruled out seeking an extension to the 'standstill' post-Brexit transition period despite growing calls to push back the deadline for a trade deal because of the chaos caused by the mutant coronavirus strain.

Negotiations between Britain and the EU remain ongoing, with the two sides still deadlocked on the crunch issues of the 'level playing field' and fishing rights.

The transition period is due to end on December 31 and if the UK and Brussels fail to ratify and roll out a deal before then they will be forced to trade on basic World Trade Organisation terms from January 1 which will see tariffs imposed on goods.

A WTO split is also expected to cause border disruption and critics have warned the UK cannot afford further chaos at ports after the discovery of a Covid-19 variant prompted France to suspend all traffic from Britain for 48 hours while other countries have also suspended travel ties.

Scottish First Minister Nicola Sturgeon said it is 'imperative' that Number 10 seeks an extension to the trade talks while senior Tory MP Tobias Ellwood said the two sides should 'pause the clock' if no agreement is in place by December 31.

But the Prime Minister's Official Spokesman this afternoon ruled out pushing back the deadline as he told reporters: ‘I think our position on the transition period is clear. It will end on the 31st of December. That remains our position.’

Meanwhile, Downing Street moved to slap down claims made by Nigel Farage and others that France had closed the border to force the UK to sign a 'bad' Brexit trade deal.

The leader of the Brexit Party said Britain is 'dealing with thugs and bullies' and it is now 'time to walk away' from talks.

But the PM's spokesman said Boris Johnson does not believe there was a Brexit element to the French decision.

He said: ‘No, we don’t think that is the reason for this. As I say, throughout the pandemic different travel restrictions have been imposed around the world.

‘You are aware of our travel quarantine policy that has been used for some time now and I pointed to the example fo Denmark where we suspended travel not too long ago.' 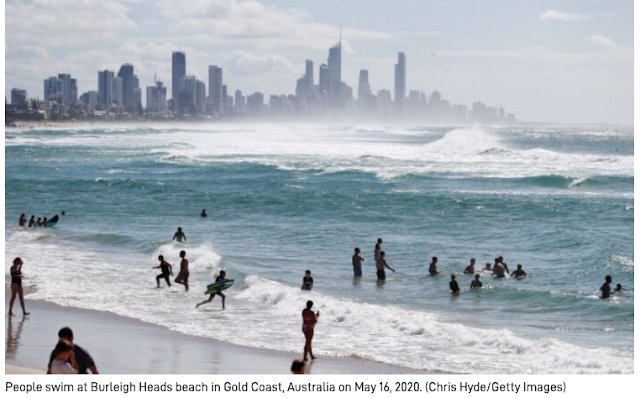 A more virulent strain of COVID-19 that has stopped the United Kingdom in its tracks has arrived in Australia, it has been confirmed.

On Monday, NSW chief health officer Kerry Chant confirmed two travellers from the UK had brought the new strain into the country.

“Today I’m advised that we’ve had a couple of UK returned travellers with the particular mutations you’re referring to,” Dr Chant told reporters.

The World Health Organisation first identified the new strain in September and it has been named the “VUI-202021/01” variant.

The genetic material in the virus that controls the spike protein – which allows COVID and other viruses to penetrate hosts cells – are where the mutations have occurred. 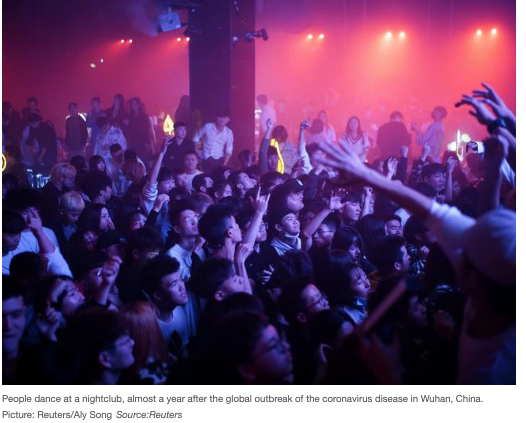