"Where Is Evidence Of 70% More Contagious Mutant COVID?" 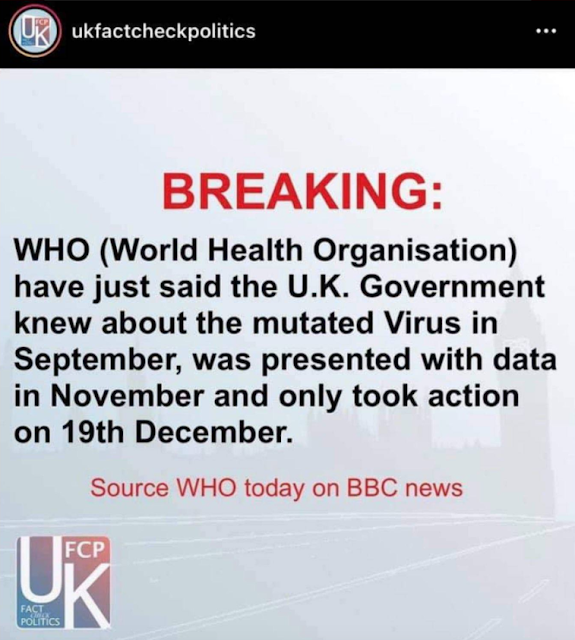 Given the "plunge" in stocks (Nasdaq is down less than 1%) and headlines blaring of COVID "mutations", @KizzyPhd decided to 'clarify' some science before all hell breaks loose (which judging by the London exodus, it already did) for no good reason. She begins...

You are going to read and hear about a million and one variant viruses, because viruses mutate by nature. It’s scary, I know. But, a couple of amino acids is not the same a whole whole new virus strain in the way that we’ve been taught to think about flu.

What is happening, often times, is selective pressure. As the virus transmits it learns how to be better at transmitting. This is why you hear “circulating faster than last variant”...

But, don’t get in a panic over it. There will take a large amount of genetic diversity to completely make the current vaccines useless... And, here is why:

Unlike monoclonal antibody therapies, vaccines (especially those using the whole spike protein) make polyclonal antibody responses. This means that the antibodies your vaccinated body will make will be able to bind the coronavirus spike in multiple places... not just one.

Remember in April when media had y’all scared over a mutation...

Then here came the D614G mutation that had reviewers on our neck... and then boom... in the mouse paper we added results showing “mRNA-1273 induces potent neutralizing antibody responses to both wild-type (D614) and D614G mutant SARS-CoV-2” nature.com/articles/s4158…

In all, please don’t be alarmed any more than you have been through this pandemic. The precautionary measures (ie. no travel) in the UK are in line with sensible measures following a regional virus spike.

In fact, the virus is always mutating...

All of which is background to what we are seeing on the ground in Europe. As Summit News' Steve Watson details, as London and the entire South East of the UK was plunged into a fresh lockdown over the weekend, scores of countries have banned all travel to and from the UK, but scientists there are demanding to see any evidence that there is a 70% more contagious mutant strain of COVID, having not been shown anything by the government.

The Daily Mail reports that Carl Heneghan, Professor of Evidence Based Medicine at Oxford University’s Nuffield Department of Primary Care, has expressed scepticism over the 70 per cent figure.

“I’ve been doing this job for 25 years and I can tell you can’t establish a quantifiable number in such a short time frame,” Heneghan said.

“Every expert is saying it’s too early to draw such an inference,” the professor added.

“I would want to have very clear evidence rather than ‘we think it’s more transmissible’ so we can see if it is or not,” Heneghan continued.

“It has massive implications, it’s causing fear and panic, but we should not be in this situation when the Government is putting out data that is unquantifiable,” the professor further urged.

“They are fitting the data to the evidence. They see cases rising and they are looking for evidence to explain it,” Heneghan declared.

The ‘mutant strain’ has been circulating since September, according to the government, with Prime Minister Boris Johnson using it to justify literally cancelling Christmas.

However, Professor Heneghan emphasised that if this strain really is that much more contagious “we should be locking down the whole country”.

The data the government has on the ‘new strain’ off COVID comes from analysis by advisory body The New and Emerging Respiratory Virus Threats Advisory Group (Nervtag).

No one has seen the data, with the Prime Minster noting it is “early data, “subject to review” but “It’s the best we have at the moment.”

Announcing the previously non-existent ‘Tier four’ restriction level, Johnson added it was happening because of a “change in the science”:

Some conservative MPs, who were already rebelling against the tier 3 lockdown, have called for all the scientific evidence the government has to be made public.

The government was accused of being ‘bounced by the science’, with former Tory leader Iain Duncan Smith noting that Chief Medical Officer Professor Chris Whitty and Chief Scientific Adviser Sir Patrick Vallance are ‘stepping back into the shadows when it suits them’.

“‘Why did they not alert ministers to the dangers earlier? Especially when, as we now know, scientists learnt about this mutation back in September,” Duncan-Smith asked.

"Why did he announce this as a new strain on the eve of the tier review when it appears to have been circulating for several months (and may have existed for months more before it was identified)?" https://t.co/HZxMp5evwK

Former minister Sir Desmond Swayne said “it does have all the characteristics of the Government being bounced by the science, as it was right at the beginning of the arrangements when we first went into lockdown last March.”

“The arrangements for Christmas were explicitly voted on by Parliament. If they’re to be changed then in my view, Parliament should vote again,” Swayne added.

“Parliament voted explicitly for a certain set of arrangements, it seems to be perfectly proper therefore that Parliament should be consulted when those are changed, irrespective of the Government acting in an emergency, nevertheless it’s perfectly proper to recall Parliament at the beginning of this week to at least ratify those changes,” the MP continued.

Swayne noted that MPs haven’t even been given any evidence to justify the heightened restrictions, and that a third of the country was effectively imprisoned via a press conference.

“Explain to us – we are after all a democracy, explain to the elected representatives the evidence that they have and why they’ve reached this decision,” Swayned emphasised.

The MP charged that the government purposefully waited until parliament had started its break for Christmas before making the announcement, in order to avoid a rebellion.

“They’ve been looking at it since September and how convenient when Parliament went into recess on Thursday suddenly they were then able to produce this revelation,” Swayne noted.

“Let’s see the evidence then, let’s have Parliament back and show us and convince us, come clean,” he urged, adding “I want Parliament to be recalled so we can scrutinise properly in a democracy decisions that are being made which affect our economy radically and our liberty.”