The pope who has no problem with aborted foetuses 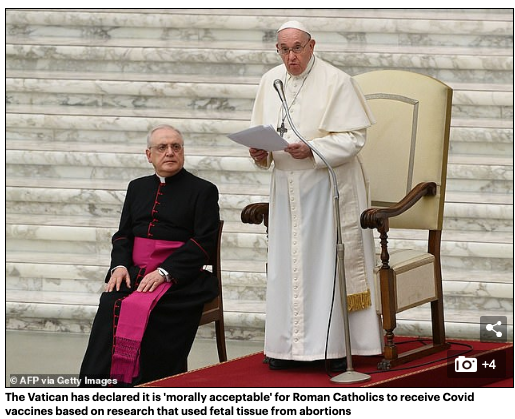 The Vatican has declared it is 'morally acceptable' for Roman Catholics to receive Covid vaccines based on research that used fetal tissue from abortions.

The Congregation for the Doctrine of the Faith, the Vatican's watchdog office for doctrinal orthodoxy, said it addressed the question after receiving several requests for 'guidance' during recent months.

The doctrine office noted that bishops, Catholic groups and experts have offered 'diverse and sometimes conflicting pronouncements' on the matter.

Drawing on Vatican pronouncements in past years about developing vaccines prepared from cells derived from aborted fetuses, the watchdog office issued a statement it said Pope Francis had examined last week and ordered to be made public.

The Catholic Church's teaching says that abortion is a grave sin.

The Vatican concluded that 'it is morally acceptable to receive COVID-19 vaccines that have used cell lines from aborted fetuses' in the research and production process when 'ethically irreproachable' vaccines aren't available to the public.

But it stressed that the 'licit' uses of such vaccines 'does not and should not in any way imply that there is a moral endorsement of the use of cell lines proceeding from aborted fetuses.'

In its statement, the Vatican explained that obtaining vaccines that do not pose an ethical dilemma is not always possible

Malachi Martin died in 1999, allegedly murdered because he revealed satanic worship in the Vatican in his novel Windswept House

This is a longer interview

The late Father Malachi Martin was a renown exorcist and Jesuit, a one-time advisor to three Popes, and best-selling author. As a member of the Vatican Intelligence Network, under Pope John the 23rd, Martin helped extend the Church into Iron Curtain countries.

In 1964, concerned about the corrupting influences of power, Martin was released from his vows of poverty and obedience after 25 years as a Jesuit.

He left Rome for New York, where he did odd jobs until a Guggenheim Fellowship enabled him to write his first bestseller, Hostage to the Devil. 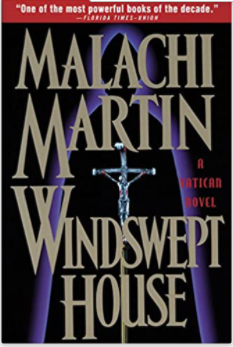