Put away your tinfoil hat! 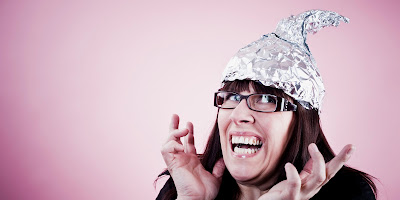 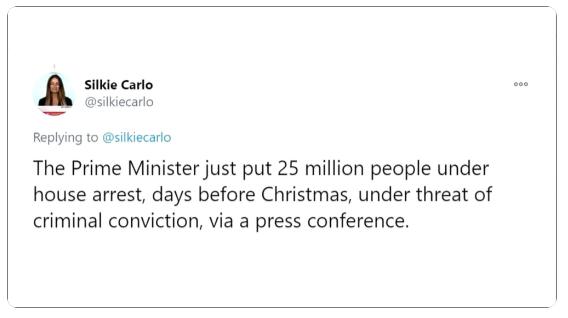 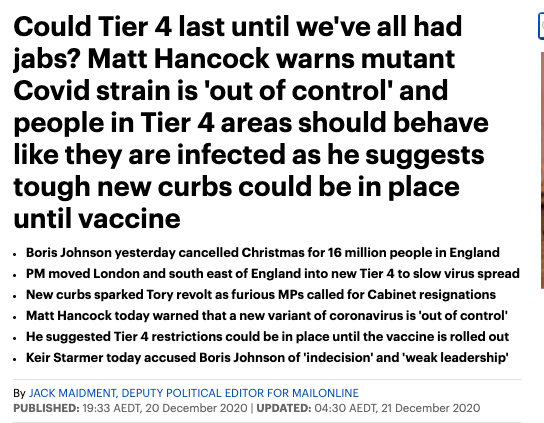 Matt Hancock today warned the new mutant strain of coronavirus is 'out of control' as he suggested draconian Tier 4 restrictions could be in place 'until we have the vaccine rolled out'.

The Health Secretary said people in Tier 4 areas should behave as if they are infected in order to combat the new variant of the disease which spreads quicker than its predecessor.

Mr Hancock said the new strain can be caught 'more easily from a smaller amount of the virus being present' as he confirmed areas subject to the toughest restrictions are likely to be in the top tier for the long haul.

The Cabinet minister said 'we have got a long way to go to sort this' and it will be 'very difficult to keep it under control until we have the vaccine rolled out'.

Tier 4 restrictions had to be introduced across London and southeast England as coronavirus infection rates spiralled out of control. Health Secretary Matt Hancock was confronted about the length of time the rules will remain in place, with Sky News host Sophy Ridge suggesting people in Tier 4 "will not be coming out anytime soon." Mr Hancock appeared to suggest the end of the restrictions will depend on the speed at which the COVID-19 vaccine is rolled out. 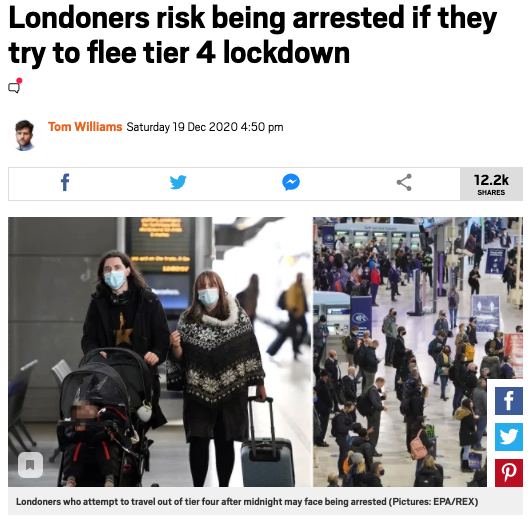 Extra police have been deployed at train stations in London today in a desperate attempt to stamp out the 'mutant' strain of coronavirus which led to Christmas effectively being cancelled for around 18 million people.

Masked officers patrolled major stations including King's Cross, St Pancras, Waterloo and Euston as Londoners tried to flee the capital after the PM plunged the city and swathes of the South into a brutal Tier 4 lockdown.

In a round of TV interviews this morning, Matt Hancock hit out at 'totally irresponsible' Londoners who escaped the capital last night and warned that police would stop people from leaving the Tier 4 city.

The Health Secretary told people living in London and parts of the South and East of England living in the toughest tier regime to 'unpack their bags' and 'reduce social contact' as he hinted that Tier 4 restrictions could be in place for months while the Government rolled out its mass vaccination programme.

He said 'of course' police will enforce the new law and will prevent people from leaving Tier 4 areas, as Transport Secretary Grant Shapps warned extra British Transport Police officers would be deployed at railway stations in the capital to 'ensure that only essential journeys take place'.

The Met Police today warned that the 'most dangerous and flagrant breaches' of Tier 4 regulations now in force will see fines given out, tweeting: 'Don't risk a fine in the lead up to Christmas'.

Mr Hancock told Sky News' Sophy Ridge: 'This was clearly totally irresponsible behaviour, and the Chief Medical Officer was absolutely clear that people should unpack their bags if they have them packed.

'I think that it's relatively small numbers and the vast majority of people in the pandemic have followed the rules and played their part. It is more important than ever that people are responsible, not only stick to the rules but within the rules restrict social contact as much as is possible because this is deadly serious.'

Reports are that Britain is being isolated 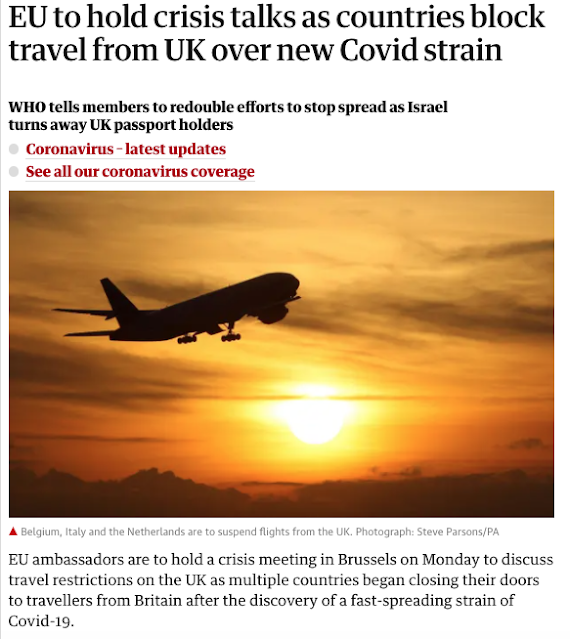 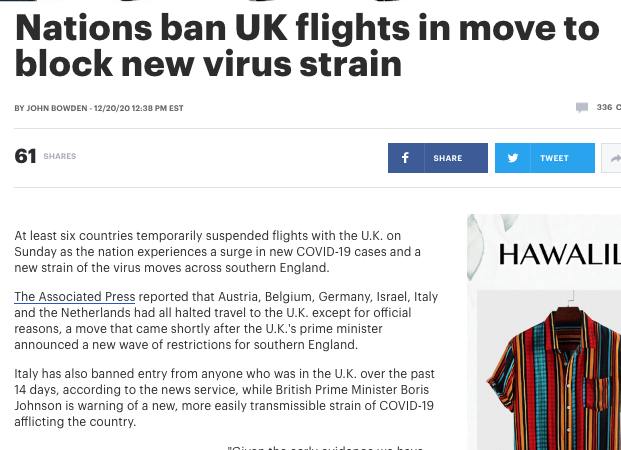 As with Jacinda Adern's lockdown of Auckland a few months ago, while millions are being held under lockdown and threated with arrest if they try to fly the flights (as of now) are still coming in.

As with the NZ case this is being withheld from the public. Will someone be embarrassed by a question on this from the press as Adern was? 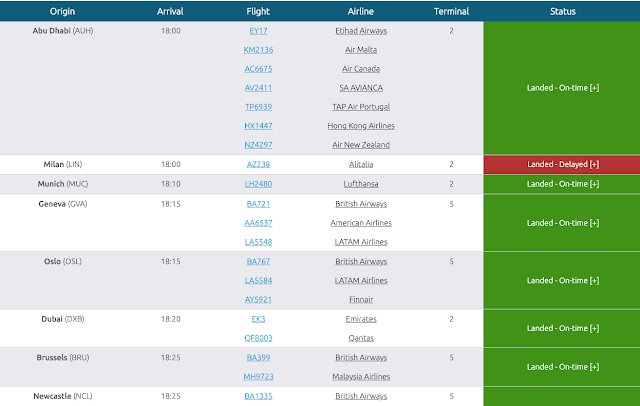 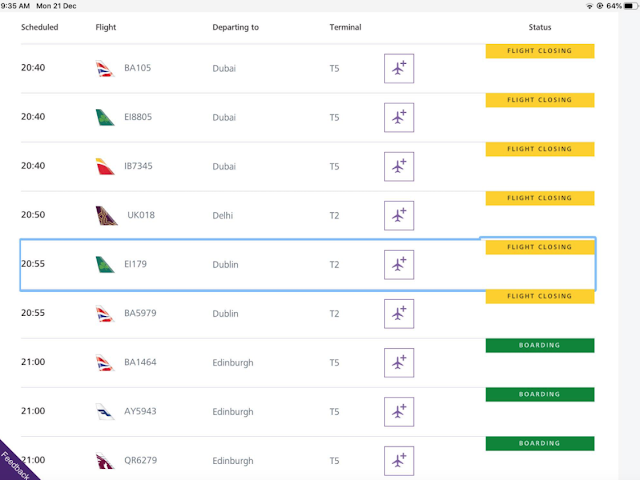 The following is an announcement over the Eurotunnel at Folkestone 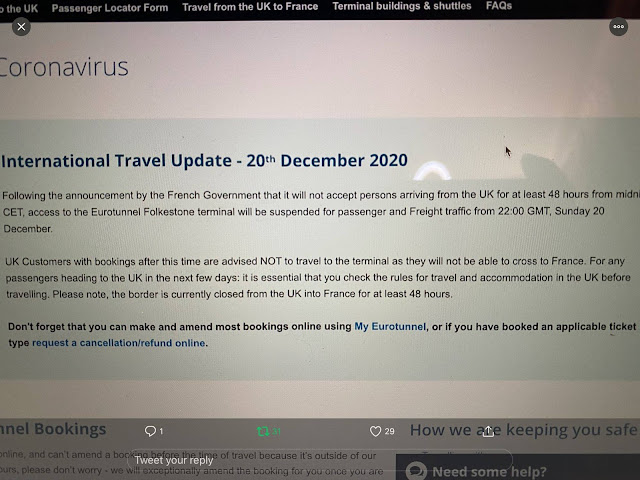