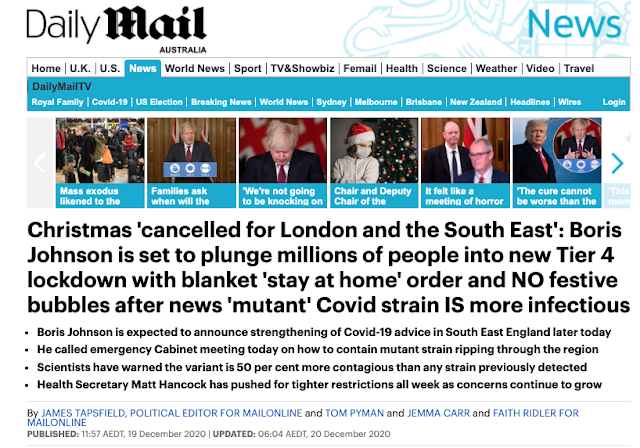 During a live briefing this afternoon, Mr Johnson has introduced a fourth tier to his lockdown system that will push London, the south east and the east of England into the top bracket for Christmas. Tier 4, which will be introduced on Sunday morning, will include a strict ban on the mixing of households and advice against travelling internationally. Mr Johnson said the new variant strain of the virus which causes Covid-19 may be up to 70 percent more transmissible and could increase the R value by 0.4

He added there was "no alternative open to me."

He Johnson added: "When the science changes, we must change our response.

"Christmas this year will be different, very different, but we must be realistic."

He added that by acting now, the public will give itself  a "better chance of protecting their lives and see them at future Christmases".

In Tier 4, people should not mix with anyone outside their own household, although support bubbles will remain in place.

In Tiers 1-3 in England the rules allowing a maximum of three households to mix will be restricted to Christmas Day only.

Mr Johnson added that people will be asked to stay at home and work from home if they can, not enter or leave Tier 4 areas, not stay away from home overnight and can only meet one person from another household outside in a public space.

He also said that non-essential retail, indoor gyms and leisure facilities in these areas will close.

The Prime Minister said: "I know how much emotion people invest in this time of year, and how important it is, for instance, for grandparents to see their grandchildren, for families to be together.

"So I know how disappointing this will be."

Chief scientific adviser Sir Patrick Vallance then spoke after Mr Johnson, where he said the new variant of COVID-19 has 23 different changes from the previous strain, with some of those "causing concern".

He said the new strain has a "significant" increase in transmissibility.

He added the evidence shows it "moves fast" and is becoming the "dominant variant".

But Sir Patrick also warned there is no evidence it is more deadly, which means the coronavirus vaccines should still be effective against the virus.

He said: "My short answer would be 'please unpack it at this stage.'"

Prof Whitty said: "If they were to go with this new variant, unwittingly, to an area that has a low prevalence and starts this being seeded even more outside the high prevalence areas that would be a significant risk to the area they went to.

"That is the reason we are really keen that people do not go from these areas."

He indicated that Tier 3 and Tier 2 restrictions had proven ineffective at controlling the new variant.

If the new variant spread "none of them would be able to hold things with Tier 3 and Tier 2 elsewhere".

The Prime Minister explained how cases had risen over the last two weeks (Image: COBR)

England's chief medical adviser said the UK has put the World Health Organisation (WHO) on alert about the mutant strain.

He said Britain had informed the global body that it had concluded the mutant strain could spread more quickly.

Former health secretary Jeremy Hunt warned the situation was on a "knife-edge" with infections rising and hospital admissions on the increase.

The latest development comes after Mr Johnson refused to rule out a third national lockdown for England - a move he has previously been deeply reluctant to contemplate.

Caroline Wheeler of the Sunday Times backed up Ms Kuenssberg's tweet, writing: “Christmas cancelled for London, South East and East, as areas moved into new Tier 4 with ‘stay at home’ message by law.

“Christmas bubbles only allowed for Tiers 1 - 3 on Christmas Day with “stay local message”.

A Government source claimed the virus is spreading at "an alarming rate" in the capital and the south east of England.

Mr Johnson held emergency talks with his Cabinet minister on Saturday to discuss the crisis.

The latest tiering changes in England - which came into force on Saturday morning at one minute past midnight - mean 38 million people are now living in Tier 3, 68 percent of the population of England.

Those areas moving into the highest tier are Bedfordshire, Buckinghamshire, Berkshire, Hertfordshire, most of Surrey, Peterborough, Hastings and Rother on the Kent border of East Sussex, and Portsmouth, Gosport and Havant in Hampshire.

Bristol and North Somerset have moved down from Tier 3 to Tier 2 while Herefordshire drops into Tier 1 - even though the county's public health director raised concerns about the relaxation.

Britain reported 28,507 new COVID-19 cases on Friday and 489 deaths, with the reproduction "R" number estimated to be between 1.1 and 1.2, meaning the number of cases is rapidly increasing.

The Prime Minister will hold a news briefing at 4pm (Image: GETTY)

On Friday Mr Johnson said he hoped England would not need a third lockdown after Christmas.

Throughout this week he had been resisting calls from Labour to rethink his "Christmas bubble" plan.

The policy will for the mixing of up to three households between December 23 and 27.

Mr Hunt, who now chairs the Commons Health and Social Care Committee, said that if the Prime Minister did not want to change the regulations, he should at least consider issuing stricter guidance.

He told BBC Radio 4: "It is a very difficult, finely-balanced judgment.

"The biggest worry is what happens indoor in family gatherings and that's where the risks do increase."

"I think they can be clearer about what is and isn't advisable because it would be an enormous tragedy if we had a spike in deaths at the end of January/February because we took our foot off the pedal this close to having a vaccine."

Wales and Northern Ireland have already announced fresh lockdowns once Christmas is over while the Scottish Government has said the option "remains on the table".

Much of the the latest focus is on the South and East of England where the new variant is thought to be most prevalent.

On Friday, the NHS in Kent announced it was suspending non-urgent hospital procedures.

They said it was treating double the number of patients it had at the peak of the first wave in April.

The PM is set to ban household mixing in multiple areas for Christmas (Image: GETTY)

A  further 339 people who tested positive for coronavirus have died in hospital in England, bringing the total number of confirmed deaths reported in hospitals to 46,122, NHS England said on Saturday.

Patients were aged between 44 and 100. All except 13, aged between 64 and 95, had known underlying health conditions.

The deaths were between November 5 and December 18.

Eighteen other deaths were reported with no positive Covid-19 test result.

Jeremy Farrar, director of the Wellcome Trust and a member of the government’s Scientific Advisory Group for Emergencies (SAGE) tweeted: “Failing to act decisively now, will mean further suffering.

“We must keep asking ourselves ‘are we doing enough, are we acting quickly enough’.”

The Labour Party said they though the tiering system had failed to curb the virus’s spread.

Jonathan Ashworth, Labour’s health spokesman: “It has been apparent for some days that the virus is again out of control in parts of the country. 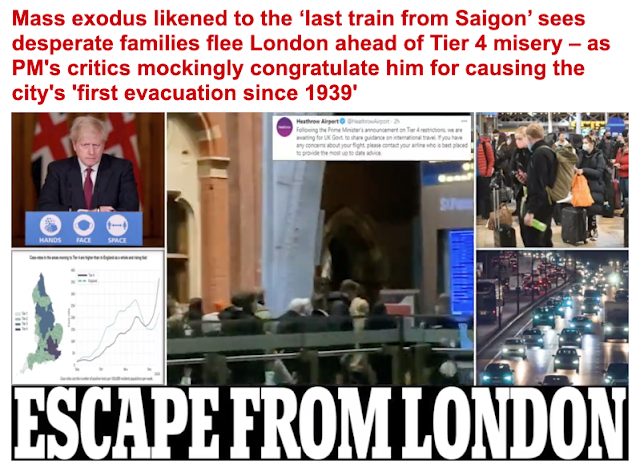 Thousands of people rushed to leave London (middle) on Saturday night after Prime Minister Boris Johnson revealed the city and a third of England will be thrust into the newly-created Tier 4.

It sparked panic and commuters scrambling to get out of the capital (pictured right top and bottom, people at train stations and busy roads leading out of London) . The draconian bracket will see non-essential shops shut, and travel restrictions including a 'stay at home' order for Christmas Day itself - even though Mr Johnson (left) insisted just days ago that it would be 'inhuman' to axe five-day festive 'bubbles'.

Christmas plans for millions of Londoners were thrown into doubt by the Prime Minister's announcement, with many planning on travelling out of the capital during the relaxation of coronavirus measures between December 23 and 27. But with the planned relaxation cancelled, and the new rules coming into force from midnight, people were tonight scrambling to get out of London while they still could.