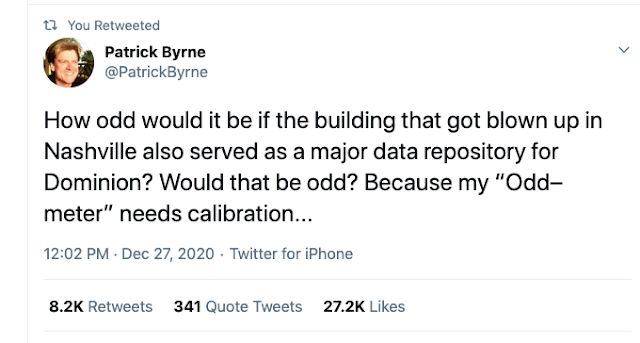 Update (2250 ET): Local news WSMV News4 Nashville is reporting "FBI agents spent the days at another location today besides searching the home of Anthony Warner, pursuing tips that he was paranoid about 5g spying on Americans."

Update (1952 ET): CBS News is reporting Metro Nashville Police's latest theory is that the suspect may have perished in the explosion.

Update (1510 ET): Local news Fox17 reports the FBI is investigating a bombing lead "at a home located on the 100 block of Bakertown Road in Antioch."

Photos from the scene show FBI agents and Metro Nashville Police outside a home with an armored vehicle.

More reporters are gathering at the scene.

Law enforcement officials tell NBC News, the home of a 63-year-old man is being searched by federal agents.

In a press conference this afternoon, Special Agent in Charge Doug Korneski said that "several individuals" had caught their attention.

CBS' David Begnaud tweeted moments ago that "federal agents are at Warner's address in the Nashville area, right now."

Begnaud also said the "blast caused considerable damage to AT&T, which apparently is a communication switch hub, knocking out internet & cell phone service throughout a wide area from Nashville to Alabama."

He noted that "investigators believe the explosion was an intentional act. They are speculating that human life was not the prime target as the explosion occurred on a Christmas morning."

"One theory investigators are looking at, regarding the Nashville Christmas Day explosion, is the possibility that AT&T may have been the target or some other building or infrastructure in the area of the explosion," Begnaud said.

The FBI Memphis Field Office has said over "500 tips and leads" are being analyzed.

At the moment, authorities won't confirm any suspect names.

Update (1353 ET): CBS News' Jeff Pegues has learned the name of a person of interest connected to the Friday morning explosion in Downtown Nashville. Multiple sources tell him that "Anthony Quinn Warner, a Nashville area resident, had a similar make and model RV."

Update (1315 ET): The FBI Memphis Field Office has tweeted a press conference will take place around 1:00 PM CST regarding the Friday morning explosion in Downtown Nashville.

CBS News' Jeff Pegues has learned that the Metropolitan Nashville Police Department "has a person of interest or persons of interest in connection" with the Christmas morning explosion that rocked Downtown Nashville.

Nashville Police released a photo Friday afternoon of the recreational vehicle involved in the bombing.

The recreational vehicle was eventually parked outside an AT&T transmission building before it exploded.

Here's an unconfirmed video of what appears to be the massive explosion.

"The severity and magnitude of the current situation are such that effective response is beyond the capabilities of the State and affected local governments," said Lee in a statement.

Lee toured the incident area, which resembled a warzone. He called damage "shocking" and a "miracle" that no one was killed.

Here's Lee's full emergency declaration request that was sent to the president. 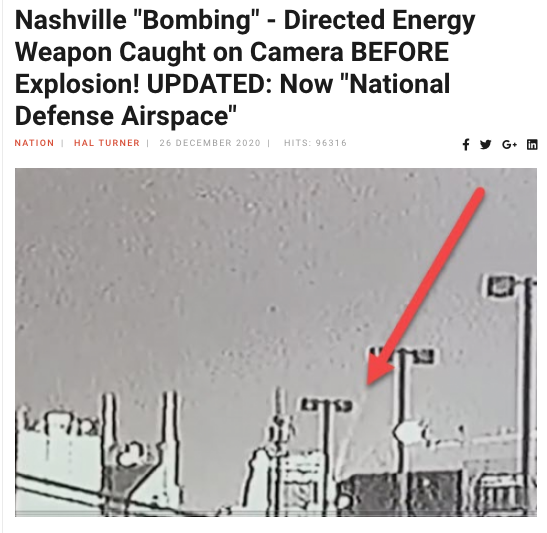 UPDATED 6:01 PM EST see bottom -- Security camera video from Nashville, TN shows what appears to be a Directed Energy Weapon coming down out of the sky and burning the AT&T Data Center location just seconds BEFORE a massive explosion erupted.  We have the video!

Before we go farther, you need to understand that the AT&T data center in Nashville, TN, which is where this explosion took place, is an absolutely CRITICAL piece of United States communications infrastructure.   It is a primary hub for VoIP traffic (Voice Over Internet Protocol) and is a primary data collection center used by the United States National Security Agency (NSA) to intercept telephone calls and keep stored copies of those phone calls.

The map below shows how few such centers exist, and the critical location of the Nashville Center relative to the rest of the system: 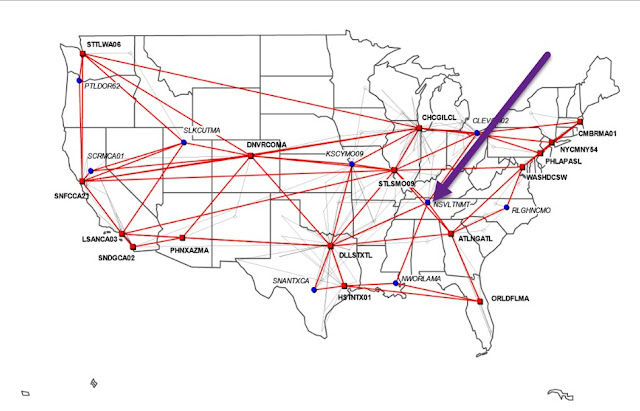 The video below aired on local television in Nashville and the news reporter whose voice can be heard, describes what he is seeing as "something coming up off the ground into the sky . . ." as giant flames from an explosion rise up into the air. Here, pay VERY close attention to the first five seconds:

But a closer look at what the reporter describes as "goes up into the sky" reveals that what is seen is a directed energy weapon fired FROM the sky, and whose beam is obstructed by the low level cloud cover as the beam moves with the satellite.

What makes it clear this is an energy beam is that it TRAVELS to the right IN COMPLETE UNIFORMITY at significantly high speed . . . thus proving it is NOT something "coming up from the ground" but rather a beam moving at high speed because a space satellite in orbit, WHICH FIRED THE BEAM,  is moving at such a high speed relative to the ground!

Very shortly after the beam is visible, gigantic flames from a ground explosion rise up from the ground below.

If this was something shooting up from the ground, them it would have a smoke/debris trail which would LINGER, being gently pushed by winds.  But that's NOT what we see.  We see the "smoke trail" moving at high speed, and very uniformly toward the right . . . which is NOT a characteristic of a smoke/debris trail.

In the video below, you will see a bright, white, flash over-exposes the video for almost a full 30 seconds.  HOWEVER, the audio remains intact and records the sound of intense static (energy) for the whole 30 seconds before it returns video, which is then in black and white instead of color.

1. Camera stays over-exposed for 30+ seconds2. The initial pure static sound is less than a second long3. The static sound it makes is consistent with energy interference4. No loud explosions are detectable

There is NO BLAST CRATER on the ground where the Recreational Vehicle (RV) allegedly exploded.

In countless images from countless other truck bombings, a large blast crater is always clearly visible in the aftermath.  Not in Nashville!   NO BLAST CRATER exists on the public street where this RV exploded.

Read the rest of the article HERE