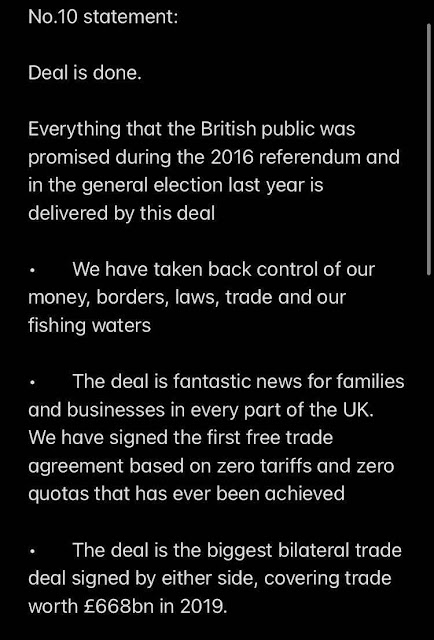 between UK and EU

MPs and peers will be recalled to parliament on 30 December to ratify the treaty. 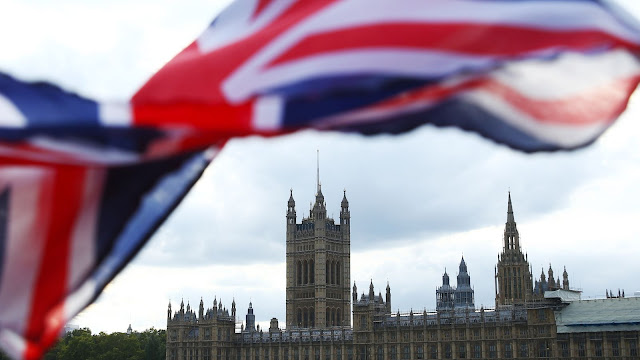 A long-awaited trade deal between the UK and the EU has been struck just days before the deadline.

The treaty will apply from 1 January 2021 and take over from the arrangements under the transition period, which has seen the UK continue to follow most EU rules since Brexit day.

Announcing the news, Boris Johnson said beating coronavirus was his "number one national priority" so he wanted to "end any extra uncertainty" by giving the country "the best possible chance of bouncing back strongly" next year.

The prime minister promised the deal will allow companies "to do even more business with our European friends" while "taking back control of our laws and our destiny" - echoing a key message of the Vote Leave campaign.

Bidding to sell it to his party and the country, Mr Johnson announced at a Downing Street news conference that "although of course the arguments with our European friends and partners were sometimes fierce, this is, I believe, a good deal for the whole of Europe".

Asked by Sky News if he could guarantee there will not be any short-term disruption when the deal comes into effect on 1 January 2021, Mr Johnson said in the immediate aftermath "yes... there are things that we have to get right, processes that maybe people have to do that they need to be aware of".

Parliament, which has broken up for Christmas, will be reconvened on 30 December to let MPs and peers ratify the agreement.

Labour leader Sir Keir Starmer announced he will back the deal, meaning it is almost guaranteed to pass, but argued it is a "thin agreement" and not what the government promised as it does not provide enough protections for manufacturing, workers' rights or financial services

In her own address, Ms von der Leyen said it had been a "long and winding road" - but that striking a deal was "right and responsible".

She added Brussels would "continue cooperating with the UK in all areas of mutual interest" such as climate change, transport and security - but that "together we still achieve more than we do apart".

On the key issue of fishing, Ms von der Leyen revealed the deal had guaranteed five-and-a-half years of "full predictability for our fishing communities".

She said the UK's chief negotiators had been "tough but fair" and the talks had been "successful".

"I know this is a difficult day for some, and to our friends in the UK I want to say: Parting is such sweet sorrow.

"But to use a line from T.S. Eliot, what we call the beginning is often the end and to make an end is to make a beginning.

"So to all Europeans I say: It is time to leave Brexit behind, our future is made in Europe.

Both sides had set a deadline of mid-October for reaching a trade deal, with the expectation it would then take time for the final version to be scrutinised and voted on.

A senior EU diplomat told the Reuters news agency earlier that a provisional application of the deal will need to be approved by member states because there is not enough time for the EU Parliament to ratify the agreement.

There were fears the talks had collapsed when they were paused earlier this month by both sides.

Since then, progress - or the lack of it - was only addressed in brief statements from London and Brussels.

After weeks of diplomatic shuttling between the two cities, including crisis talks between Mr Johnson and Ms von der Leyen over dinner, the fate of negotiations continued to hang in the balance.

The prime minister said earlier this month that "things are looking difficult", while the EU's negotiator Michel Barnier said that "there is a chance of getting an agreement but the path to such an agreement is very narrow".

The final stumbling blocks were fishing rights, the "level playing field" measures aimed at preventing the UK from undercutting the EU on standards and state subsidies, and the way that any trade deal disputes would be resolved.

But now a breakthrough has been made.

It means that barring any last-minute surprises, Britain will exit the transition period with an agreement in place.

Mr Barnier said "the clock is no longer ticking" and that for him, it was "a day of relief tinged with sadness".

"Over these four and a half years, the EU has shown unity... It has been a great honour for me to be part of this European unity," he added.

David Cameron, the Conservative prime minister who called the EU referendum in 2016, said: "It's good to end a difficult year with some positive news.

"Trade deal is very welcome - and a vital step in building a new relationship with the EU as friends, neighbours and partners. Many congratulations to the UK negotiating team."

And his successor, Theresa May, tweeted: "Very welcome news that the UK & EU have reached agreement on the terms of a deal - one that provides confidence to business and helps keep trade flowing.

"Looking forward to seeing the detail in the coming days."

Nigel Farage, the former Brexit Party and UKIP leader, said the deal is "not perfect" and he's "worried we're going to be too closely aligned to EU rules" because the UK "will not be able to step out of lines without them having the threat of imposing immediate tariffs".

"That detail, we'll discover in the next couple of days," he said, but added: "Are we far better off than we were five years ago? Absolutely."

Failure to reach a deal would have seen tariffs imposed on UK exports to the EU - its biggest trading partner - on World Trade Organisation terms, and could also have increased bureaucracy.

But some disruption and teething problems are still likely as business, citizens and governments adapt to the new arrangements that will be in place between the UK and EU.

Boris Johnson was boosted tonight by a tentative welcome from Eurosceptics for his hard-fought Brexit deal - as Keir Starmer admitted that Labour will back it.

The PM has lined up a crucial moment next Wednesday when he will try to push the legislation underpinning the historic agreement through all its Parliamentary stages.

And the early response from Tory MPs was positive, with one senior figure telling MailOnline they were pleased with the details so far and 'maybe it will be a happier Christmas after all'.

Nigel Farage has also signalled early support before the full 500-page text emerged, suggesting he would vote for the package 'in principle' if he were an MP.

In a move that effectively guarantees the PM victory, Sir Keir has risked the wrath of his Remain-backing benches by announcing he will order his MPs to back the deal.

Strategists fear that being seen to oppose Brexit again could wreck any hopes of winning back critical Red Wall seats at the next election.

However, there are fears that political 'landmines' could be lurking in the full text of the deal.

The fishing industry has accused him of 'sacrificing' them to EU demands, while there will be concerns that Brussels could exploit a four-year 'break clause' to extract more favourable terms further down the line.

And Nicola Sturgeon has used the pact to ramp up her independence drive, saying that Scotland wants to stay inside the EU and must be given another chance to split from the UK. 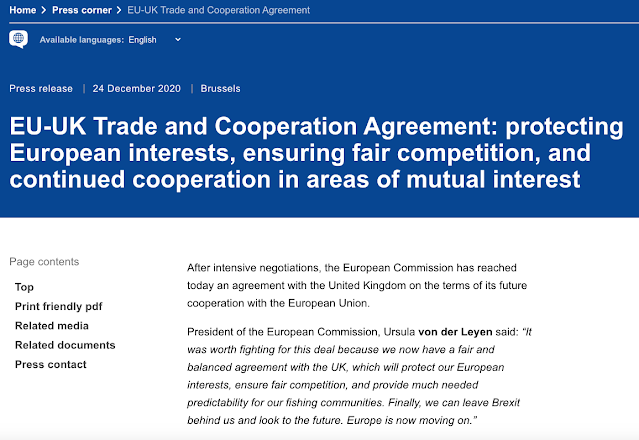 From the Express, the main supporter of Brexit

European Commission President Ursula von der Leyen has announced that the UK and the EU have reached a "fair" deal after months of haggling. Prime Minister Boris Johnson is also set to make an announcement today just days before the transition period's end on January first. Reports suggest Mr Johnson is confident that he can win over Brexiteer MPs in the Conservative Party as the anti-EU European Research Group (ERG) turn to their lawyers to scrutinise the deal. While most of the group are set to back a deal, it has emerged that as many as 20 ERG MPs could be planning to vote the deal down.
https://www.express.co.uk/news/uk/1376518/eu-news-swipe-brexit-deal-trade-talks-boris-johnson-nigel-farage-spt

As details of the trade pact emerged, the group which represents fishermen issued a stern statement warning they were far from satisfied from what they had read so far. They said: “Sadly, from what’s emerging, the trade deal treaty is far from a clean break to international normality/law.”
https://www.express.co.uk/news/politics/1376642/brexit-news-latest-fishing-boris-johnson-brexit-trade-deal-eu-brussels-uk-politics
Posted by seemorerocks at 12:11