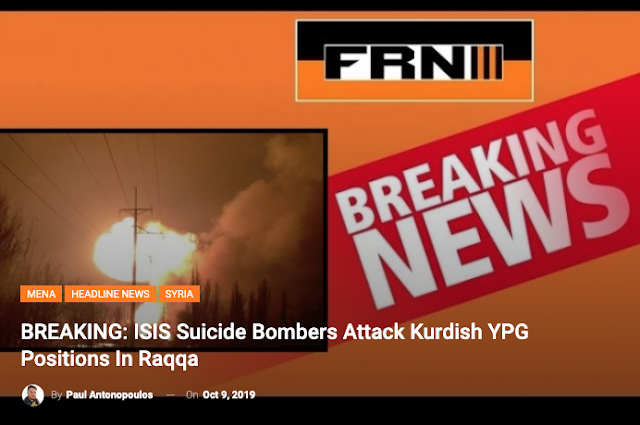 RAQQA, Syria – According to the Kurdish-led Syrian Democratic Forces (SDF), at least three Daesh suicide bombers attacked Wednesday its military positions in Syria’s Raqqa, Sputnik reported.
The SDF stressed in a statement that the Daesh* terrorists took “advantage of imminent Turkish invasion”, adding that “clashes still ongoing”. The SDF has, however, not provided any further details on casualties or damage inflicted by the terrorist attack.

1,084 people are talking about this
Raqqa was seized by the Syrian opposition forces in 2013 and then captured by the Daesh, which then proclaimed the city its de facto capital. In 2016, the SDF, backed by the US-led coalition, launched a campaign to liberate the city. The operation culminated in the 2017 Battle of Raqqa, which eventually brought Raqqa under the SDF’s control.

Turkish President Recep Tayyip Erdogan has vowed to launch a military operation in northern Syria east of the Euphrates in the coming days after the United States announced a pullout of their troops from the region.
The impending Turkish operation is likely to be an assault on the Kurdish fighters who led an armed coalition known as the SDF, which the US supported to spearhead an attack on the Daesh terrorist group.
The United States, which used to back the Kurds, has made it clear that it will not “support or be involved in” the Turkish operation. It has also started to withdraw troops from the area over security concerns. Syrian Deputy Foreign Minister Faisal Mekdad has said that his country will be defending its entire territory and will not allow occupation of “even an inch of Syrian land.”
The attack comes after Trump’s comments on Monday where he said the U.S. was withdrawing from Syria and other states had to take more responsible. This also comes when Turkey plans to create a safe zone to free the border territory east of the Euphrates from Kurdish forces and displace Syrian refugees from Turkey.
The two NATO members previously negotiated the possibility of creating a safe zone in northeastern Syria, but in September Turkey accused Washington of delaying the process and warned that it would establish a “buffer zone” without US assistance if necessary.


In addressing the ruling, Damascus stated that both states are occupiers as their forces were sent to the country illegally without any authorization.
Posted by seemorerocks at 18:26