I have been pointing out the danger for some time, but who would take any notice? Now it’s just a “one-off”.

All of the braided rivers of the South Island are fed by the now-disappearing snow cover.

It is hard not to see into the future unless one is determined not to see the truth. But most journalists seem to be ignorant of the difference between the present and future tenses. 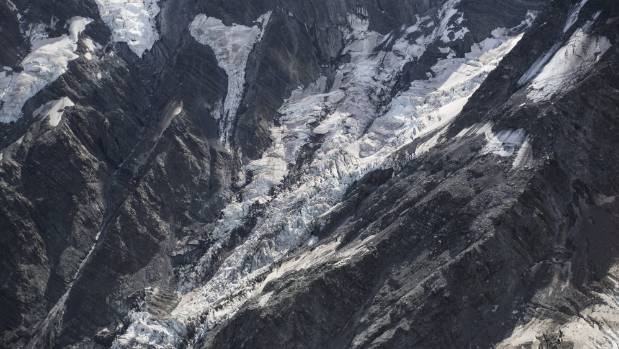 The long, white cloud blanketing the Southern Alps is thinner and dirtier than usual after the historically warm summer stripped some of its peaks bare.

Over the weekend, scientists flew over the mountains for Niwa's annual snowline survey, which determines how much snow remains at the end of summer.

They want to know if the permanent snow line – the altitude at which snow remains throughout the year – has risen or fallen at 50 representative glaciers. If the snowline is higher, the glacier lost snow; if the snowline is lower, it gained snow. 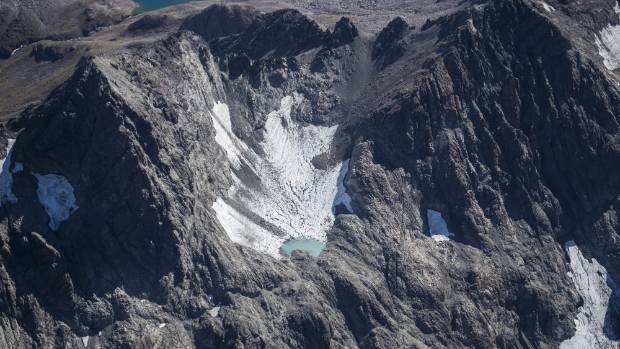 GEORGE HEARD/STUFF
The mountains are dotted with small lakes resulting from melting ice.
The snowline is used as a proxy for the glacier's health, and shows whether it's likely to be losing or gaining mass. This is the survey's 40th year, and it has been collating information about the same 50 glaciers since around 1985.

After a summer in which which January temperatures were nearly 3C warmer than average, it was expected the glaciers would lose mass and the snowlines would rise. But the results were far more dramatic than any past survey, and showed some of the Alps had barely any fresh snow at all. 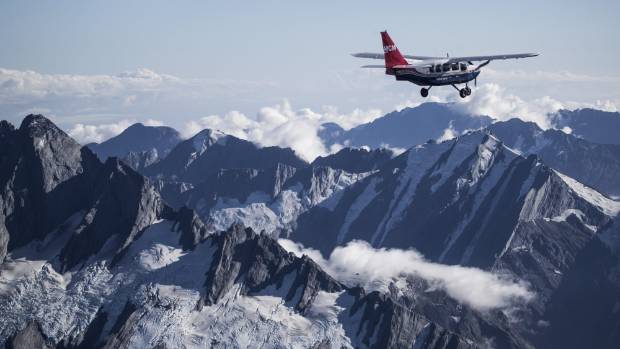 GEORGE HEARD/STUFF
A planeload of scientists examining the Southern Alps as part of Niwa's annual end of summer snowline survey.
"This is an incredibly extreme year," said Niwa's principal scientist Dr Andrew Lorrey.
"Thirty of the 50 glaciers we track have snowlines above the top of the mountain, and for the ones not above the top of the mountain, we could probably characterise them as higher than normal as well."
When a snowline is above the mountain, it effectively means no fresh snow survived the summer, leaving just the glacier's permanent ice and old, dirty snow. The previous record, in 2011, was 16 glaciers with a snowline above the mountains. 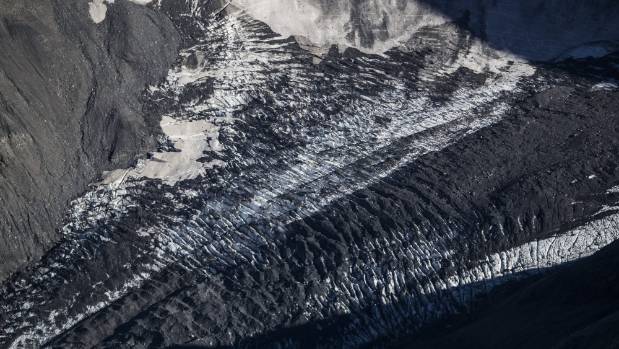 GEORGE HEARD/STUFF
Retreating ice exposing rock at the base of a glacier.

From above, it was clear some of the glaciers had notably shrunk this year, and looked dirtier than usual. One of the surveyed glaciers, on Mt Wilson, was difficult to find because it was the "size of a postage stamp," one scientist said.
Parts of the mountains were dotted with small, blue lakes, representing where a glacier or a permanent snow pack once existed.


The glaciers have oscillated between snow loss and snow gain since the surveys began, but the long term trend has been one of decline due to higher average temperatures resulting from human-induced climate change. 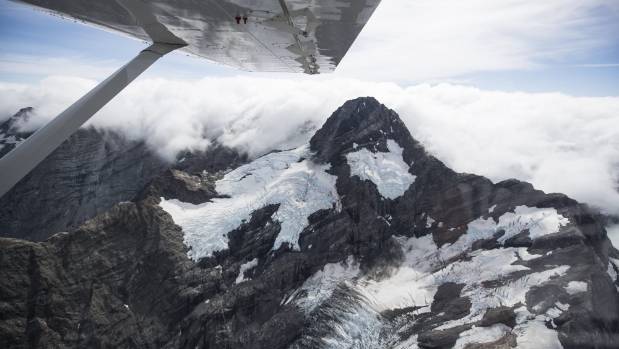 GEORGE HEARD/STUFF
Ice and snow clutching to the mountains in pockets.

The snowlines will continue to rise as winter snowfall decreases and the rate of summer melt accelerates in a warmer world.

While some of our largest glaciers, like Fox and Franz Josef, still looked spectacular from above, the smaller, lower glaciers were withering in the hotter summers.

"It's what you'd expect with a warming climate, that our high elevation alpine regions are going to be strongly affected," Lorrey said. 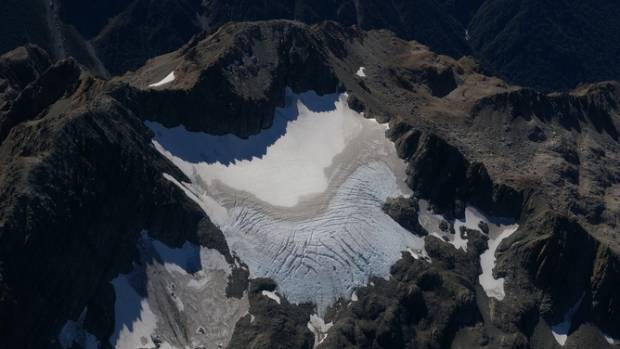 TREVOR CHINN
Rolleston glacier from a past survey. The gray line is effectively old snow, and shows where the snowline had been the year before. The fresh white snow above it shows the new snowline, which is rising.

"Some of the glaciers we surveyed today are down to very, very small snow packs, and when they were initially included in the survey in the the 1970s, they were a lot larger."
There was a strong connection between warmer surface sea temperatures in the Tasman and snow melt, Lorrey said. For much of the summer, the Tasman Sea has been warmer than usual, at some points by up to 6C.
Since 1977, tens of thousands of photos have been taken to calculate the snowline altitude. The surveys were started by Dr Trevor Chinn, who has been involved consistently since then. 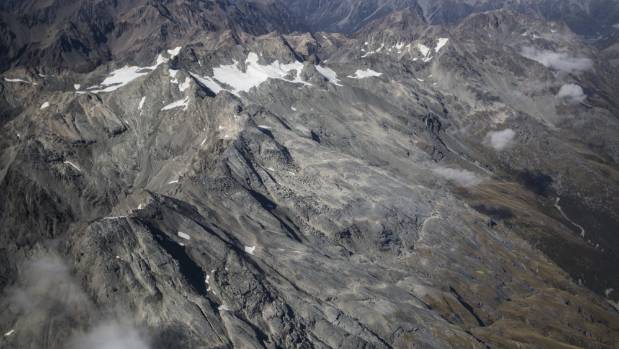 GEORGE HEARD/STUFF
Parts of the Alps are bare, with small pockets of snow.
Chinn, now 80, joined the survey again this year and said the loss of snow was significant.
"There's been incredible shrinkage," he said.
"There were only a couple of lakes in 1985, but now you have a look... It means we're losing a massive amount of ice into the snow melt." 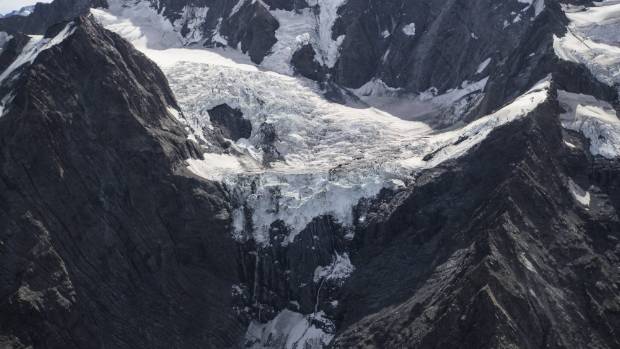 GEORGE HEARD/STUFF
A glacier high in the alps.
The glacial lakes in the mountains are expanding quickly, as the glaciers feeding them melt from beneath. The largest lake, at Tasman Glacier, started forming in the late 1970s and is now around 7km long and hundreds of metres deep.
Other lakes are emerging regularly, in pockets high in the mountains.
Glaciers are seen as a vital proxy for understanding the changing climate because they are sensitive to changes in temperature. The smaller, steeper glaciers respond almost immediately to temperature, while the largest glacier can have a response time of many decades. 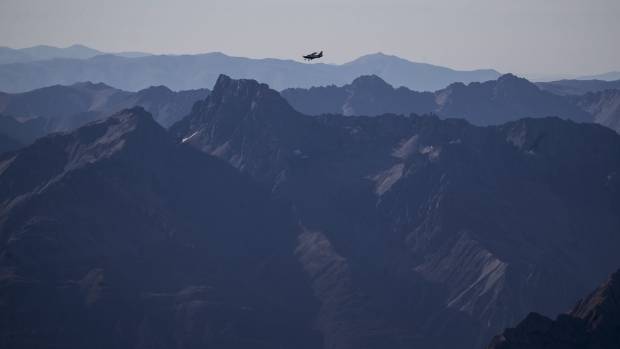 GEORGE HEARD/STUFF
A planeload of scientists above bare mountains.

The melting of small glaciers is a clear sign the climate is warming, Chinn said.
"I think they're the most valuable measure of climate change because every single item to do with climate is fed into them," Chinn said.
"They're going to shrink a lot."

GEORGE HEARD/STUFF
Much of the ice on the Alps is patchy and dirty. 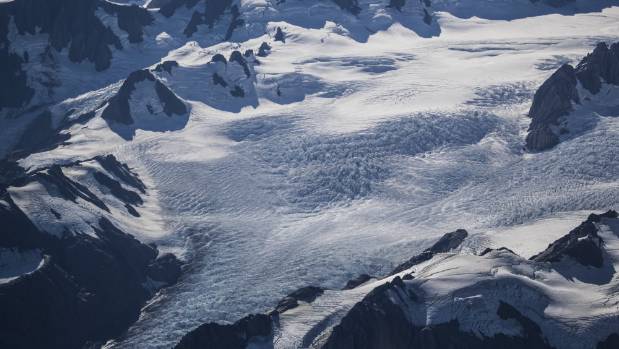 GEORGE HEARD/STUFF
The larger glaciers, like Franz Josef and Fox, still have impressive amounts of ice.