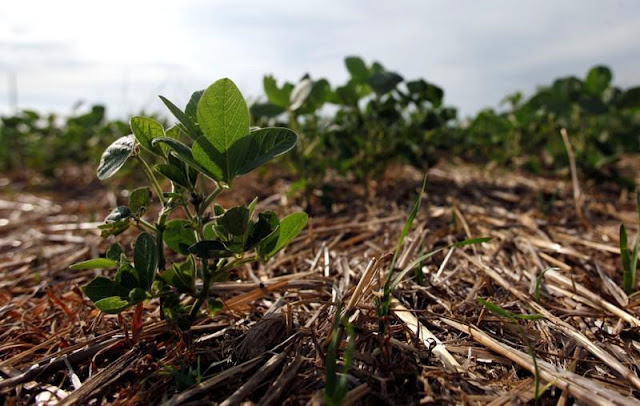 BUENOS AIRES (Reuters) - Argentina’s Rosario Grains Exchange slashed 14 percent off its forecast for the country’s soy crop on Thursday, saying a drought now in its fourth month would limit the harvest to 40 million tonnes versus its previous estimate of 46.5 million.

The exchange cut its corn crop estimate to 32 million tonnes from 35 million. Argentina is the world’s third-biggest exporter of corn and soybeans, as well at its top supplier of soymeal feed, used to fatten cows and pigs from Europe to Asia.

“The impact of the drought on the Argentine economy will go to $4.6 billion, or 0.7 percent of gross domestic product projected for 2018,” the exchange’s head of research Emilce Terre said in a message, adding that more crop forecast cuts were possible, especially for corn.

“The season continues to be characterized by lack of water,” the exchange said in a statement on its website. “Some privileged areas have gotten rain, but the amount of water in those areas barely surpassed six centimeters, at best.”

Most analysts have slashed their soy crop forecasts, which started the season in the range of 55 million tonnes, to below 45 million. A treasury ministry official told Reuters on Wednesday the drought would cut between 0.5 and 1 percentage point off 2018’s headline growth rate.

Weather forecasters say they do not expect enough rain over the days ahead to reverse the damage in most areas.

The Buenos Aires Grains Exchange currently projects the soy harvest at 42 million tonnes and the corn crop at 34 million.

Soy harvesting began in parts of the Pampas provinces of Cordoba, Santa Fe, Entre Rios and Buenos Aires, totaling about 2 percent of nationwide planted area, the Buenos Aires exchange said in its weekly crop report. “Yields in harvested areas have been very uneven,” it said.

The drought has meanwhile expanded north toward marginal soy-growing provinces like Chaco and Santiago del Estero.

“If moisture is not restored in the soil of central Chaco province, it will increase the chance of another cut in our production projection, which remains at 42 million tonnes,” the report said.

The estimates were broadly in line with those of independent analysts like Gustavo Lopez of the Agritrend farm consultancy.