Israeli media: Trump Will Scrap Iran Deal On May 12

Trump Will Scrap Iran Deal On May 12: Report 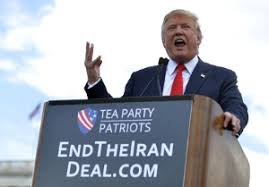 What was widely seen as a forgone conclusion, just got (unofficial) confirmation.


According to Israel's Channel 10, President Trump will scrap the Iran deal on May 12, the next deadline Trump set for the US's European partners to propose a fix to the deal.


But even before Trump appointed Bolton to succeed McMaster as National Security Advisor, the termination of the Iran deal was already in the stars, particularly after Trump fired former Secretary of State Rex Tillerson and appointed former CIA Director Mike Pompeo to take Tillerson's place.

Trump also hinted his plans following a meeting with Israeli President Benjamin Netanyahu at the White House earlier this month.

It's widely expected that Iran will resume its enrichment of uranium as soon as the deal collapses, while the US formally excludes Iran from SWIFT - again - curbing the amount of oil Iran can export by approximately 1 million barrels daily, and potentially sending the price of crude higher in the summer months.