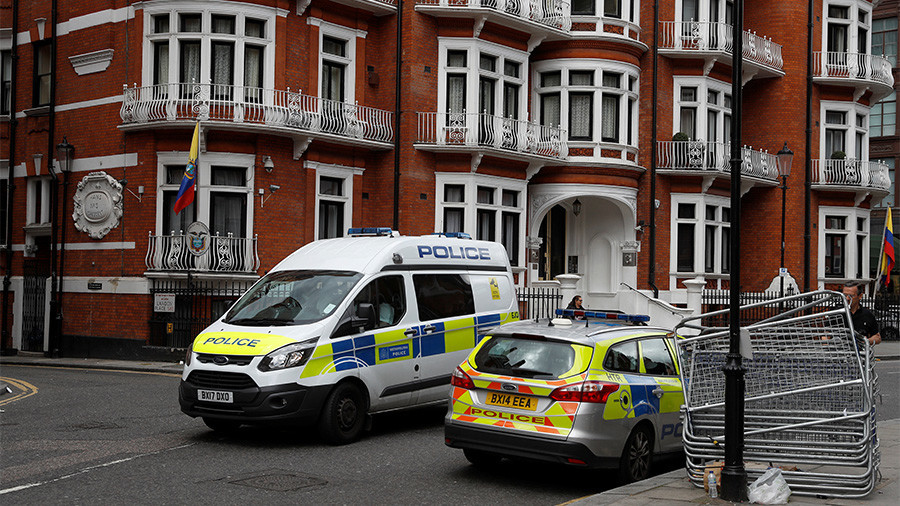 The Ecuadorian government has suspended Julian Assange’s communication privileges with the outside world. The move was sparked by Assange’s alleged breach of an agreement to refrain from interfering in other states’ affairs.

The Ecuadorian government specifically cited Assange's activity on social media, claiming that his recent posts may have jeopardized Ecuador's relationship with the UK, the EU and other nations.

"The action was taken following Assange's breach of a written agreement signed with the Ecuadorian government at the end of 2017, in which he vowed not to send messages interfering in the affairs of other sovereign states,” the government said in a statement Wednesday. "The Executive remains open to the possibility of further sanctions in cases of future breaches of the agreements by Assange."

Neither WikiLeaks nor Assange has made an official statement regarding the reports. Kim Dotcom has called on Assange supporters to gather outside the embassy building in solidarity, with several protesters already congregating there by Wednesday afternoon.

Former Greek Minister of Finance Ioannis Varoufakis also tweeted about Assange Wednesday. He called for people to rally around Assange to force the restoration of Assange’s connection to the outside world.

Demand “Reconnect Julian”
Until Julian is back online
Thank you

READ MORE: ‘It is OVER!’ Dotcom claims victory in US extradition case

"It is with great concern that we heard that Julian Assange has lost access to the internet and the right to receive visitors at the Ecuadorian London Embassy. Only extraordinary pressure from the US and the Spanish governments can explain why Ecuador’s authorities should have taken such appalling steps in isolating Julian," Varoufakis wrote in an online statement.

“A world in which whistleblowers are hounded, small countries are forced to violate their cherished principles, and politicians are jailed for pursuing peacefully their political agenda is a deeply troubled world – a world at odds with the one the liberal establishment in Europe and the United States proclaimed as its artifact since the end of the Cold War.”

It is with great concern that we heard that Julian Assange has lost access to the internet and the right to receive visitors at the Ecuadorian London Embassy. Only extraordinary pressure from the U…

It is with great concern that we heard that Julian Assange has lost access to the internet and the right to receive visitors at the Ecuadorian London Embassy. Only extraordinary pressure from the U…
yanisvaroufakis.eu

Assange’s latest tweet before his alleged disconnection and digital isolation came Tuesday, March 27. He responded to an apparent insult during a question and answer session in the UK House of Commons.

READ MORE: ‘Better a worm than a snake’: Assange bites back at Tory minister (VIDEO)

Suzie Dawson and I are about to launch an online vigil for Julian Assange supporters from around the world. Let’s join together and demand the immediate restoration of Julian's human right to communication.

We will be using the hashtag #ReconnectJulian


‘In current hysterical climate, storming of Ecuadorian embassy to get Assange can’t be ruled out’ 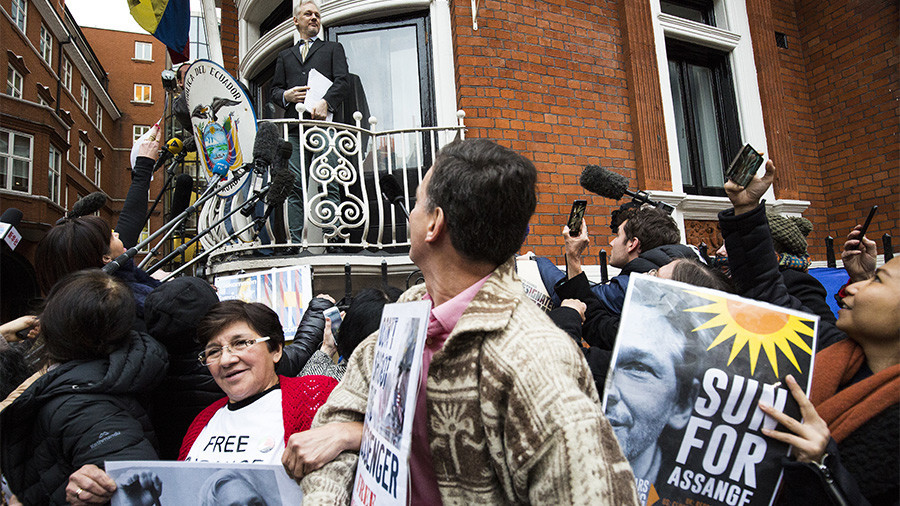 All bets are off when the US, UK and NATO allies are pushing towards a form of military confrontation with Russia, cutting off diplomatic relations, Patrick Henningsen, executive editor at 21st Century Wire, told RT.

British MP Sir Alan Duncan, minister of state at the Foreign and Commonwealth Office, denounced Julian Assange as a "miserable little worm" after the WikiLeaks chief tweeted criticism of the UK's handling of the Skripal poisoning.

Assange answered that he’s a political prisoner, detained without charge for eight years, in violation of two UN rulings, adding: “yet nothing wrong with being a ‘little’ person although I'm rather tall; and better a ‘worm’, a healthy creature that invigorates the soil, than a snake.”

RT: Why was there such a harsh reaction in Parliament to the tweet?

Patrick Henningsen: I don’t know. Alan Duncan’s comments follow on the heels of [Defence Secretary] Gavin Williamson’s comments, which can only been described as the sort of atmosphere in Parliament has descended into a sort of public school lunch room rather than the sort of decorum that you would expect from elected representatives when you are talking about serious matters of state. Effectively you are positioning your country into potentially a military conflict against another UN Security Council member. It is kind of a serious issue. Julian Assange is only highlighting some of the discrepancies, the hypocrisies, the unanswered questions of this very serious case.

(1/3) The manner of and timing of Russian diplomatic expulsions is poor diplomacy. The expulsions occurred 12 hours after one of the worst building fires in post Soviet history, which killed at least 64. Russians will see the timing as gratuitous.

@JulianAssange
27 Mar
Replying to @JulianAssange
(2/3) That 21 US allies have expelled diplomats over an unresolved event in the UK and that the US expelled nearly three times as many diplomats as the UK, the alleged victim country, helps the Kremlin further a narrative that it is under conspiratorial siege led by the US.

(3/3) Further, while it is reasonable for Theresa May to view the Russian state as the leading suspect, so far the evidence is circumstantial & the OCPW has not yet made any independent confirmation, permitting the Kremlin push the view domestically that Russia is persecuted.

RT: Were the points Assange made regarding the Skripal case fair, in your view?

He said it was reasonable to suspect Russia, but pointed out the evidence was circumstantial and needed OPCW confirmation... Why would that be unreasonable?

PH: What is unreasonable is that Julian Assange has a platform to speak and to express his views, and the statements coming from this member of Parliament, you should read into that, is that the state doesn’t want people with dissenting views to have platforms and be able to express those if there is an opposition to whatever the official party line is. We are in desperate need of adult supervision here. We’ve got a situation in Britain, we have a state broadcaster doing comical mockups of Her Majesty’s Loyal Opposition in sort of Russian garb which we saw only last week. This is a situation that is unprecedented. People need to pull back from this climate of hysteria that has overtaken the situation right now. We’ve got a serious unresolved case here. No evidence has been presented at all to substantiate the initial charges that were made only hours after the incident by certain members of government. This is a very difficult situation to reconcile, if you are speaking from a government position.

RT: The MP said Assange should just leave the Ecuadorian embassy and face justice. Why doesn't he do that?

RT: Will the UK now step up its efforts to bring Assange into custody, do you think?

PH: Short of scrambling an SAS commando team to storm the Ecuadorian embassy in Belgravia just behind Harrods shopping center, I really don’t see that happening. What is worse though is allowing this person, who is essentially a member of the press, who is a publisher – above all else WikiLeaks is a publishing platform – to allow him to languish; it could affect his health, could have huge ramifications for his personal well-being, that is the status quo. Maybe this is going to be drawn out indefinitely, 100 years of solitude for Julian Assange in the basement in Belgravia, I would certainly hope not. But any aggression by the British government or the UK law enforcement to forcibly remove Julian Assange from the Ecuadorian embassy would be an international incident that would be unprecedented. However, in this current hysterical climate that seems to be the US-UK and its NATO allies pushing towards a sort of military war confrontation with Russia, cutting off diplomatic relations, then really all bets are off. And you could see the situation where a country like Britain would take an unusual move, brash move, impractical and maybe irrational move of storming an embassy to forcibly remove a publisher who really should be allowed to walk free and leave the country according to other international bodies and esteemed legal panels like the UN.

Posted by seemorerocks at 12:17