Israelis use tear gas from drones 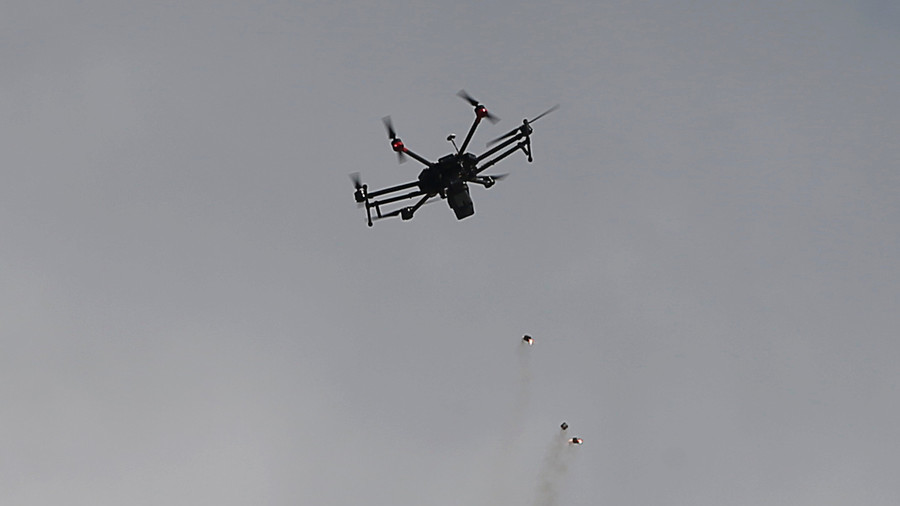 The Israel Defense Forces (IDF) has used tear gas-deploying drones to disperse huge crowds of Palestinian protesters along the Israel-Gaza border area Friday.
So far, at least 12 Palestinians have been killed and up to 500 injured in the clashes, Reuters reports. One Palestinian farmer was killed following an IDF tank volley in the early hours of Friday morning.The IDF then used a combination of live rounds and rubber-coated steel pellets to disperse the crowds demonstrating at the #GreatReturn before using its airborne tear gas system
"First thing, they [IDF] used tear gas that they fired using vehicle-mounted guns. And then, as the crowds increased, they brought drones to fire tear gas
canisters," an eyewitness, who chose to remain anonymous, told RT.com.

Demonstrators rolled burning tires and hurled stones at the border fence area, prompting the IDF to declare the area a "closed military zone" while accusing "the Hamas terror organization" of endangering the lives of Gaza civilians. 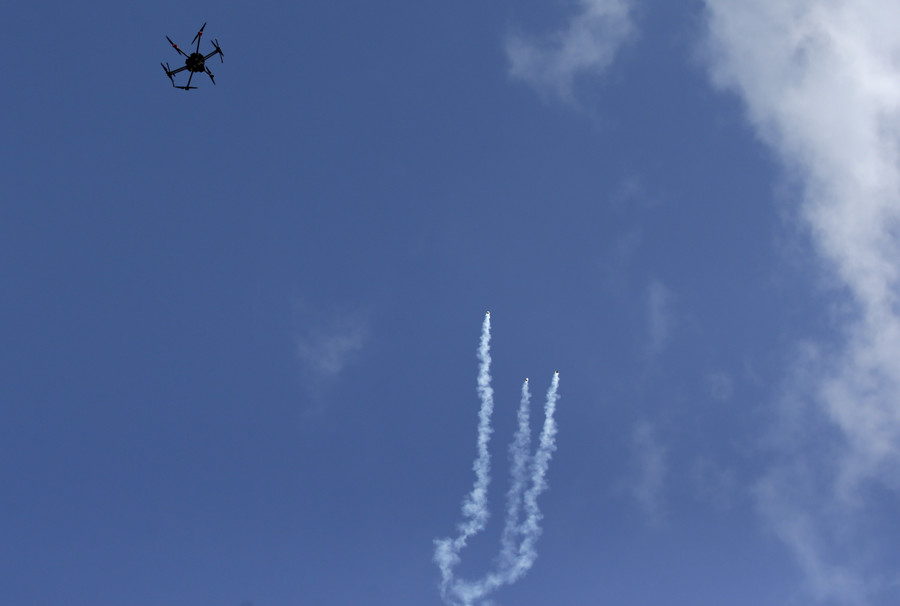 Tens of thousands of demonstrators called for the right of return for refugees in
what is now Israeli territory. The protests and clashes took place in at least six
locations along the roughly 65km (40-mile) border fence.

#GreatReturn is coinciding with the Jewish holiday of Passover and it’s feared the demonstrations will serve to increase tensions in the already-volatile region.
Palestinians have vowed to continue their protest for six weeks.

Early on Friday, Israel boosted its military presence along the security fence
surrounding the enclave, by deploying additional infantry battalions. Earlier, it had
also announced that over 100 snipers authorized to use live ammo would be
deployed to the volatile border area. More police officers were also sent to southern Israel as backup in case the army fails to prevalent the Palestinian protestors from crossing
into Israeli territory. Israeli citizens were also forbidden from approaching the border without special permission from the IDF.

The measures were employed in anticipation of the March of Return, a rally
dedicated to Land Day, which marks the appropriation of Palestinian territories by Israel and the killing of six unarmed civilians by Israeli security forces on March 30, 1976.

Before the protest, Hamas leader Khaled al-Batsh warned that there would be more than just slogans this time around and that the Palestinians were desperate to return to the
land taken from them. Batsh also said that the rally was a message to US
President Donald Trump that the Palestinians won't give up their rights in
Jerusalem, despite the US decision to move its Israeli embassy to the historic city.

The IDF estimated that that some 20,000 people took part in the protests, which
quickly turned violent, in five locations along the border fence. The Palestinian
rioters were "rolling burning tires and hurling firebombs and rocks" at the security
forces, which responded with "riot dispersal means and firing towards main
instigators," it added.

The use of live fire has already led to a number on casualties on Friday, surpassing
the death toll from 42 years ago. Nine people were killed by the IDF during the riots, the Gaza Health Ministry said, adding that more than 1,000 others were injured, mainly by
tear gas and rubber bullets, but there were also those wounded by firearms.

Earlier in the day, one Palestinian man was killed and another injured by a round
from an Israeli tank, local officials claimed. "Overnight two suspects approached
the security fence and began operating suspiciously and the tank fired towards
them," an IDF spokesman said. Israel said that it looked into reports that a person
was killed as a result. Witnesses claimed that those targeted were farmers, who
simply wanted to gather some crops in order to sell them afterwards.

The death toll provided by the Gaza Health Ministry on Friday wasn't confirmed by
the Israeli military either. The IDF routinely absolved itself from any responsibility
for the casualties, saying that the "Hamas terror organization endangers the lives
of Gaza civilians and uses them for the purpose of terror. Hamas is responsible for
the violent riots and all aggression from the Gaza Strip."