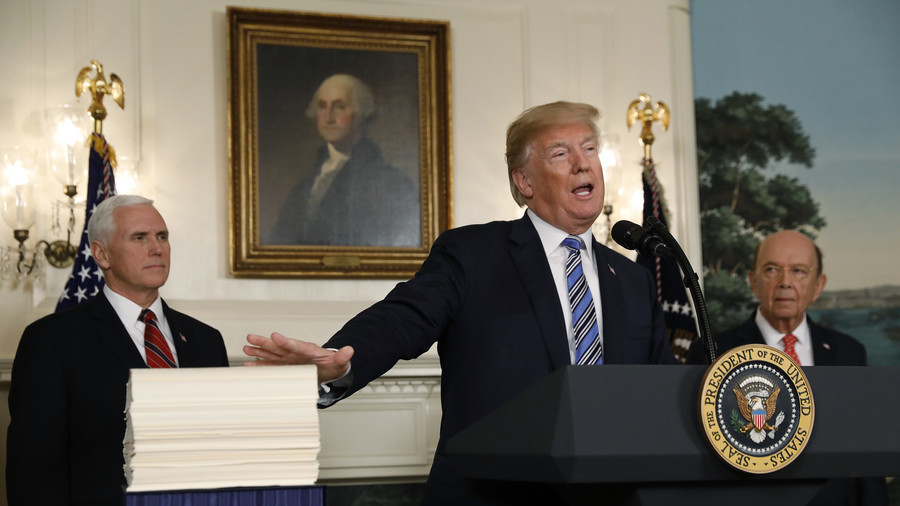 President Trump on Friday prevented another government shutdown by signing a $1.3 trillion federal spending bill. Nestled within the 2,200-page document was a controversial act, revolutionizing the way the government handles data.

The CLOUD act was passed without much fanfare. The controversial legislation has been described by the American Civil Liberties Union (ACLU) as both sinister and dangerous. It deals with the manner in which the US government can access data, needed for law enforcement operations on United States citizens, that is stored on overseas servers.

The legislation was tacked onto the mammoth spending bill on Wednesday night. It also changes the way foreign governments can request information on their citizens from US tech firms.

Previously the law required the government to have mutual legal-assistance treaties with their foreign counterparts. These governments would then contact tech giants with law enforcement requests directly without using the department of justice as an intermediary.

Tech companies could, if they so wished, resist these requests. The CLOUD act strips away a layer of judicial review which critics feel gives too much power to the executive branch. It is the executive branch that decides which governments have access to information.

In other words the president can, according to the Electronic Frontier Foundation (EFF) “enter into “executive agreements” with foreign governments that would allow each government to acquire users’ data stored in the other country, without following each other’s privacy laws.”

Detractors say that this action will allow countries with questionable human-rights records to access information on their citizens without needing a warrant. Let’s say for the sake of argument Saudi Arabia enters into an executive agreement with America. As US based internet companies host the majority of internet traffic, Saudi Arabia could wiretap a Saudi citizen located anywhere on earth without any of the safeguards put in place by US law. Saudi Arabia would not need a warrant to do so or even notify the US government that they are monitoring the Saudi citizen. The same is true of any country that has signed an “executive agreement” with the US.

The US Supreme Court will review a Department of Justice request to overturn a landmark appeals court decision in favor of Microsoft over protections for company data stored overseas, mostly out of...

“US and foreign police will have new mechanisms to seize data across the globe. Because of this failure, your private emails, your online chats, your Facebook, Google, Flickr photos, your Snapchat videos, your private lives online, your moments shared digitally between only those you trust, will be open to foreign law enforcement without a warrant and with few restrictions on using and sharing your information,” the EFF wrote in a blog post.

Despite opposition from various civil liberties groups and privacy advocates the act received broad bipartisan party support, big tech companies such as Microsoft also welcome the CLOUD act’s passing. “Today is an important day for privacy rights around the world, for international relations, and for building trust in the technology we all rely on every day,” Microsoft President Brad Smith wrote in a statement. 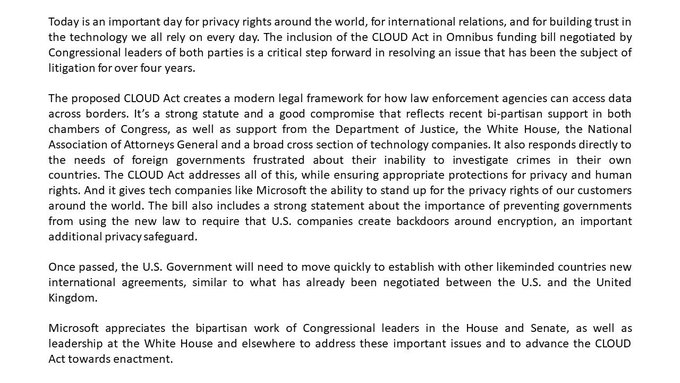 Brad Smith ✔@BradSmi
Today is an important day for privacy rights around the world, for international relations, and for building trust in the technology we all rely on every day.