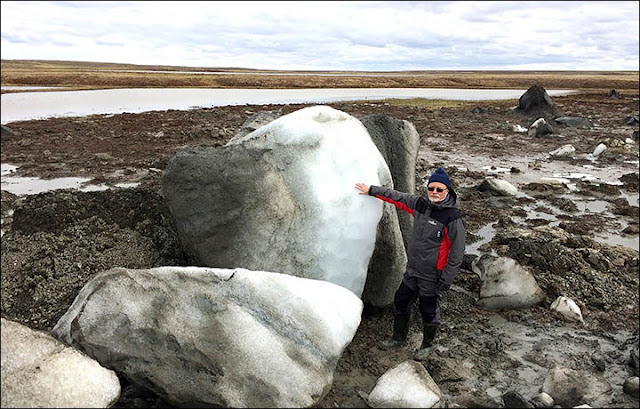 A new theory also surmises that human exploitation of natural gas resources on the Yamal peninsula has led to the forming of toxic pockets which then explode, forming funnels or craters.

The phenomenon of dramatically exploding pingos in Siberia’s polar regions has come to light only in recent years.

It is being actively examined by scientists because of deep concerns over the safety of natural gas industrial installations including pipelines, as well as residential areas, for example on Yamal peninsula.

A series of crater lakes - some tiny, others large and deep - have been caused by what has been seen as thawing permafrost leading to methane gathering under pingos - and then exploding.

Today’s claims about second explosions in the same craters is entirely new. 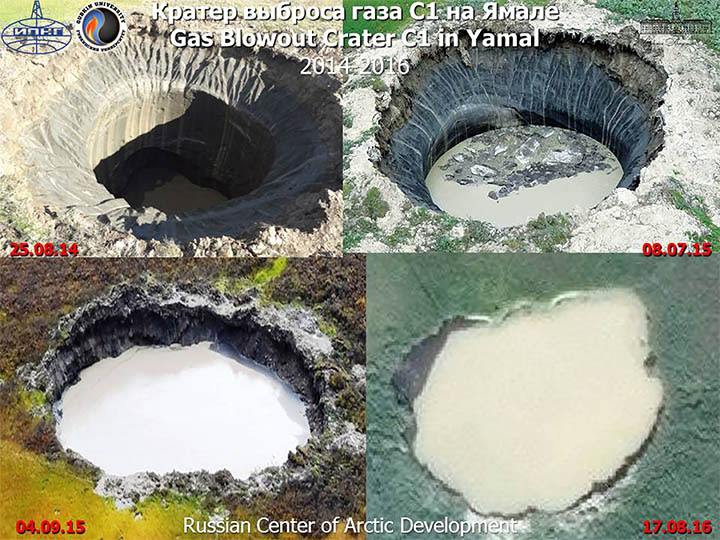 The development of the famous Yamal gas crater spotted in 2014. Picture: Vasily Bogoyavlensky

Professor Vasily Bogoyavlensky, deputy director of the Oil and Gas Research Institute in Moscow said: ‘In December 2017, we discovered from space that in one of the craters flooded with water a new pingo appeared - and exploded.’

These are not volcanoes but there are similarities, he said.

‘To some extent the mechanisms of volcanism apply here - pressure accumulates, and a release occurs.

‘Then the situation stabilises.

‘Part of the erupted rock falls to the bottom, and closes the degassing channels.
‘Then the pressure again builds up and at a certain moment there is another release.' 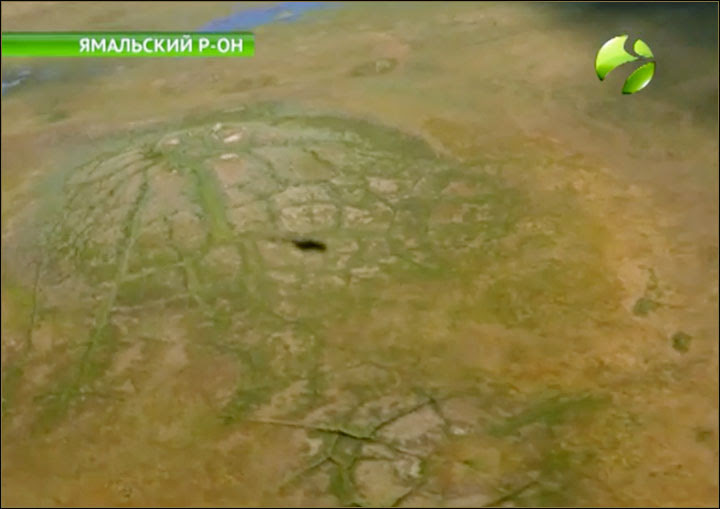 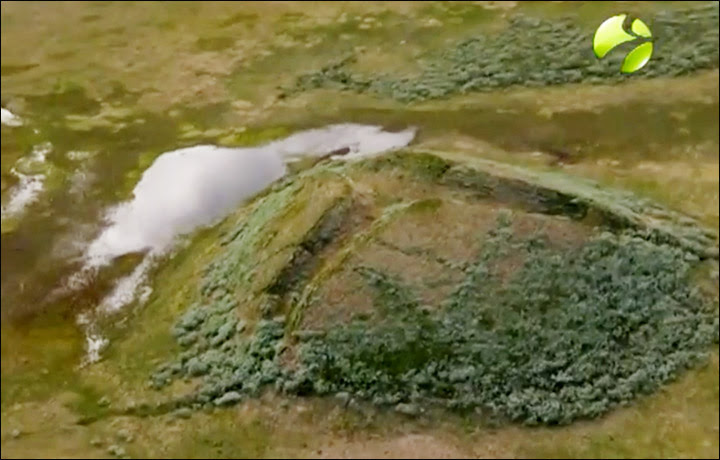 He said: 'We proved that the forming of craters is not a one-off phenomenon, not a one-time gas eruption.

‘There can be periodically - annually, or every two or several years - additional emissions.

‘And this of course increases the risk to human life in the Arctic.'

The pingo with the repeat explosion has not been identified yet.

Dr Bogoyavlensky has warned previously of an extreme threat to industrial infrastructure as well as towns and villages.

But his other theory - that man may have caused some of the eruptions - is also new and intriguing.

‘It is possible that some are technogenic in nature,’ he said.

Gas crater appeared in June 2017 right in the Mordy-Yakha River.

The idea is that human activity is deploying technology to extract natural gas has had unexpected consequences.

For example, leaks from production facilities may have led to the forming of ‘gas pockets’ and consequent eruptions.

He is certain from analysis that was not the case at one site: a dramatic explosion in the Mordy-Yakha River.

But he is far from certain that man had no role in other eruptions.

The river explosion ‘is a natural phenomenon.

‘We managed to take samples of gas, and analyse them. The gas is biogenic.

‘There are no gas wells nearby.  So there is no doubt that the appearance of this funnel is natural. 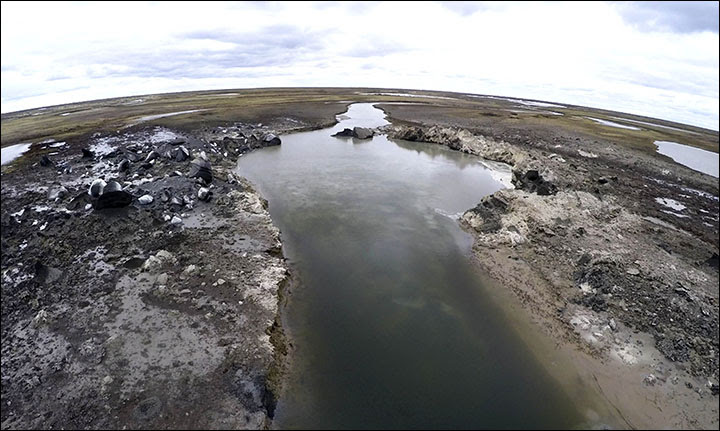 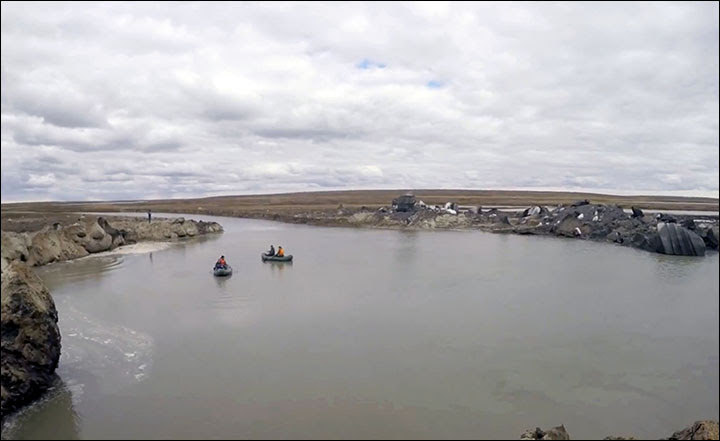 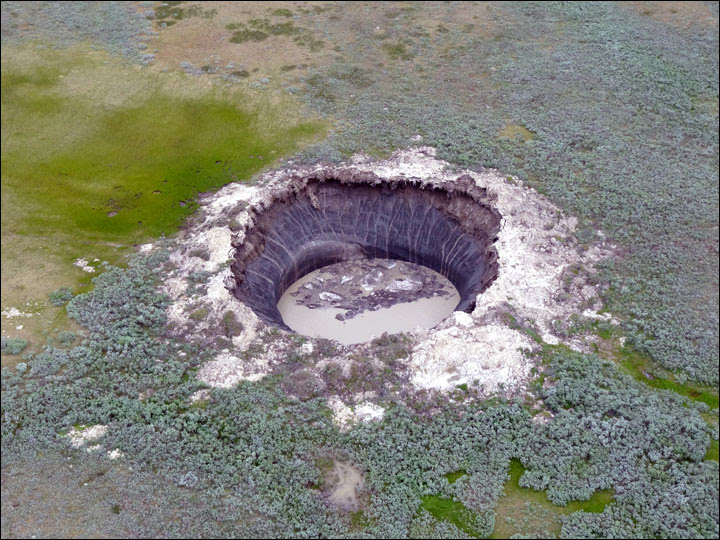 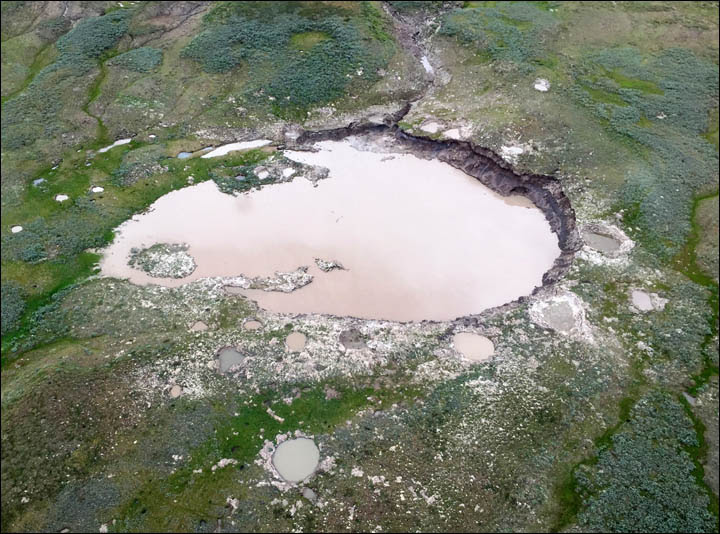 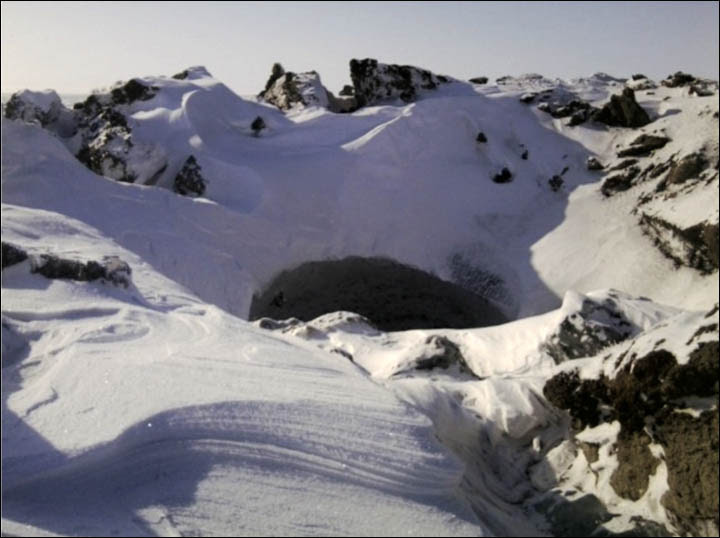 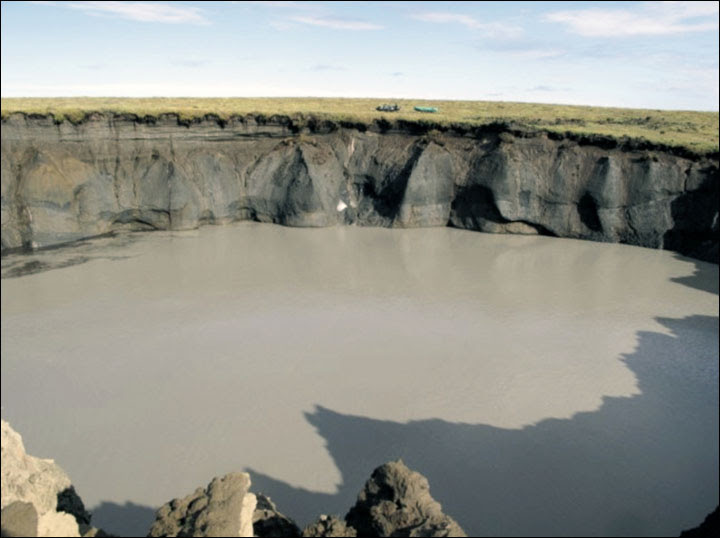 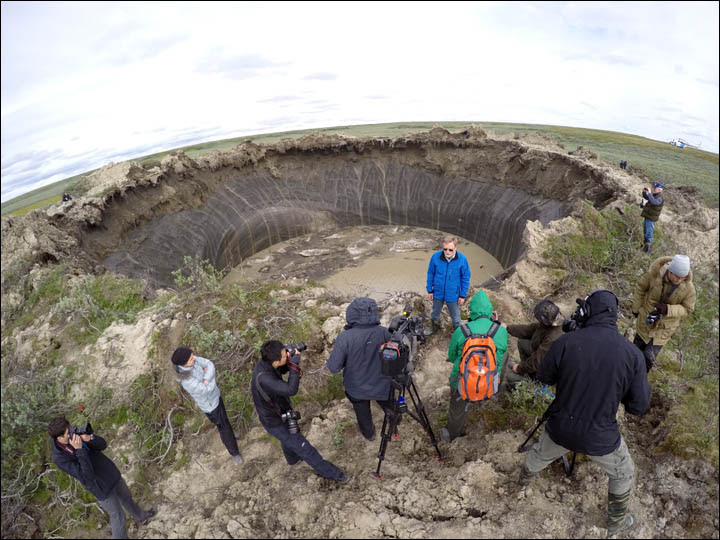 ‘But we cannot say this for sure about all the craters discovered in recent years, or be sure that human activities did not contribute to their emergence.’

Some craters are in the vicinity of industrial gas exploitation facilities.

He urged continuing research into the phenomenon, and has previously pointed to the risks associated with these new eruptions.

‘In a number of areas, pingos - as we see both from satellite data and with our own eyes during helicopter inspections - literally prop up gas pipes,’ he said last year.

‘In some places they jack up the gas pipes….they seem to begin to slightly bend these pipes.’

The problem is extensive.

‘It doesn't mean that every pingo carries danger - but it is still clear that we can draw certain conclusions.'

A dozen new craters have been identified in three years.