I have cut back a little on coverage of climate change stories unless they are news or new contributions to out understanding.

This falls into that category 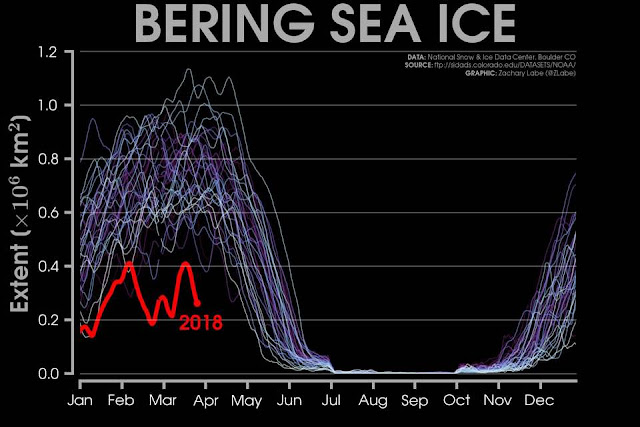 The melting season hasn't started in earnest yet, but it seems the Bering Sea hasn't received the memo. For almost the entire winter, sea ice has been reluctant to form there, and now that the Sun has returned, the ice edge has started to retreat to record high latitudes, past the Bering Strait all the way up into the Chukchi Sea. Here's how that looks on Wipneus' regional graph: 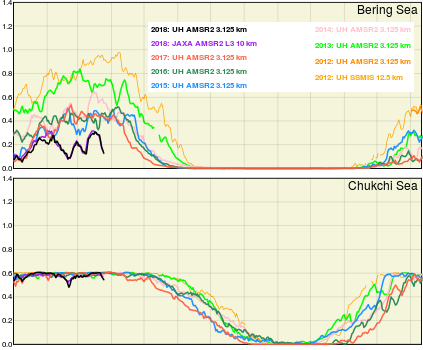 To emphasize how truly exceptional this is, here's a comparison with the situation in all other years from the 2006-2018 period (images retrieved from the University Bremen sea ice concentration maps page on the ASIG, click for a larger version): 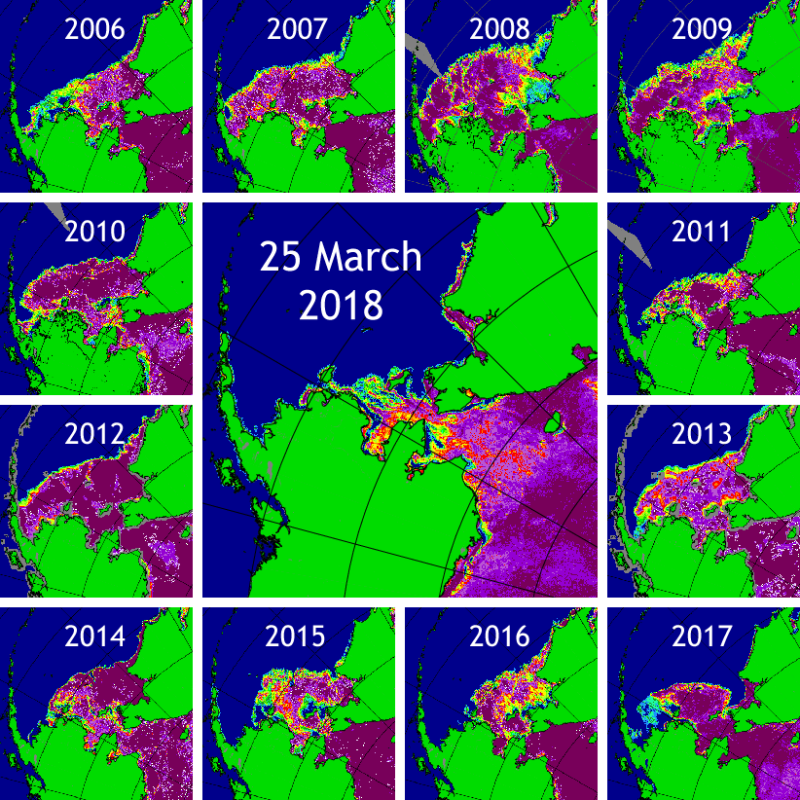 Now, if this was it, other years would maybe catch up in the next few weeks, but this isn't it. The coupled HYCOM-CICE model from the Naval Research Laboratory forecasts the sea ice to continue to drift northwards, until the end of the month at least:

This ice drift is caused by winds, of course. These winds have already brought some anomalous heat with them, right past Bering Strait, as can be seen on this DMI temperature map: 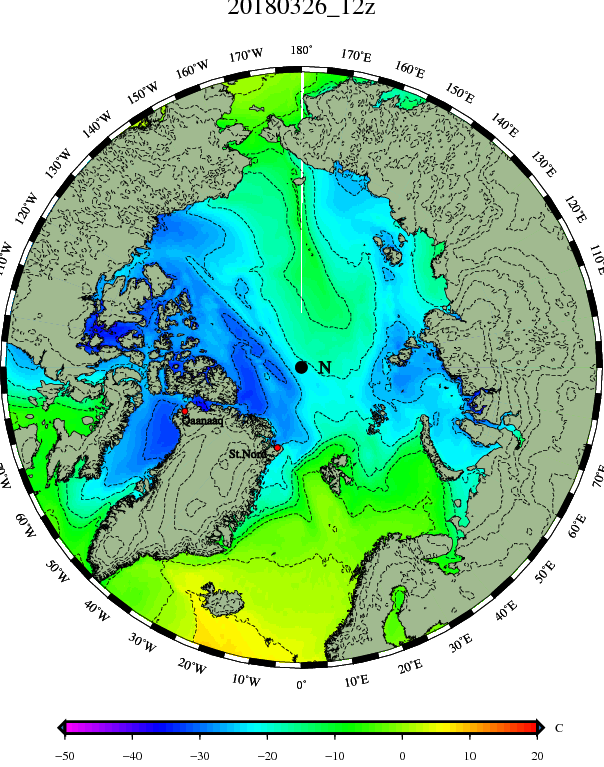 According to the GFS weather model, these winds will continue to bring in mild air well into April(images provided by Climate Reanalyzer):

The winds are probably pushing in warmer water from the North Pacific as well. Here's how sea surface temperature anomalies in the Bering area compare to those of 25 March last year, when SSTs were already relatively high: 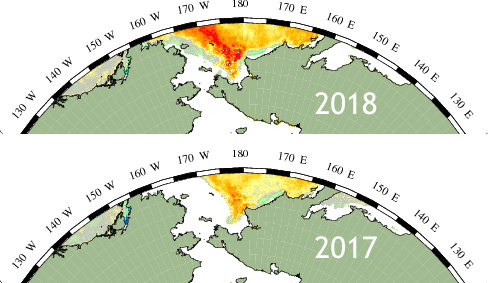 These images from the VIIRS instrument aboard the joint NASA/NOAA Suomi National Polar-orbiting Partnership (Suomi-NPP) satellite show how the ice has already been retreating from the Alaskan coast during the past few days (hat-tip to JayW over on the ASIF, who created the original animation):

This is going to continue for a couple of days, and we'll have to see what happens to the open water that the ice is inevitably going to leave behind. I don't know whether there will be enough cold to let it freeze over again, or whether the ice gets shoved back towards the coast when the winds turn (if they turn any time soon). Either way, this can't be good for the ice, even though the winds cause ridging further into the pack. At the same time, even further away, the ice gets pushed towards Fram Strait, which may increase sea ice area/extent in the Atlantic regions for a while, but isn't good for the ice pack in the long-term. I'll look closer into this next week.

One thing we do know, and that is that what we are witnessing in the Bering Sea, is unprecedented in the satellite era. This will make the Pacific side of the Arctic extremely vulnerable to further, rapid melt-out, if weather conditions wish it so. We'll see.

A couple of the comments:


Over on the ASIF commenter Romett1 posted this table showing Bering sea icea area numbers according to NSIDC: 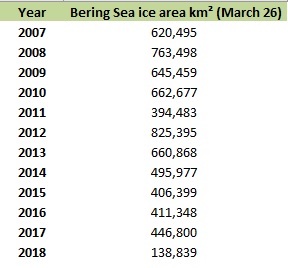 Hi Neven
I have rarely seen the Bering area, in particular Alaska being so warm all winter, Bering Russian side area apparently has no stations for good data.
I can recall only 2 small periods of normal cooling. This was largely due to near static circulation associated with weak polar vortices, as reported in January,

http://eh2r.blogspot.ca/2018/01/very-weak-tropospheric-polar-vortex.html
At least the equally warmer Novaya Zemlya region finally got cold about a week or 2 ago, but Alaska remained above normal all winter , and true enough, its ice footprint or lack of ice, describes this quite well.
Posted by seemorerocks at 15:46