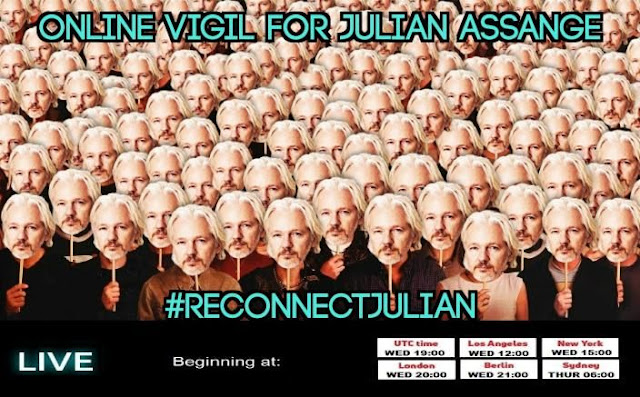 As is being widely reported, WikiLeaks Editor In Chief Julian Assange has had his human right to freely communicate restricted, at the Ecuadorean Embassy in which he is arbitrarily detained. This includes the ability for him to receive visitors.

His friends, supporters and loved ones find this unacceptable and are coming together to demand Julian's access to them be immediately restored.

Assange's friend, Internet entrepreneur Kim Dotcom, is joining myself and other acquaintances and supporters of Julian and WikiLeaks, in an online vigil to be broadcast to You Tube and Facebook Live.


We are calling upon members of the public in the UK to assemble at the Ecuadorian Embassy (4 Hans Crescent, Knightsbridge Station, opposite Harrods) to show their support for Julian.

Everyone unable to attend the Embassy in person is encouraged to join this online event to help raise awareness about Julian's situation.

Please amplify the hashtag: #ReconnectJulian and share this release everywhere.