This is not a drill

This Is NOT A Drill - Russia Moving Artillery

Russia is moving old artillery close to Ukraine. It appears that Russia is not doing this as a drill but concerned over NATO advancement and buildup on its borders. There has been recent info regarding troop movement from NATO in Poland for October 10th. Russia may be taking precautions.

Hush hush the Russians pulled out of mothballs older systems up to date of the 80, forming two new divisions of heavy artillery, that is equipped with a 240 self-propelled mortars "Tulipan" and the second with a 203-mm self-propelled guns 2C7M Malka.

Old weapons, equipped with new positioning systems ammunition "smart" guided, useless against stealth aircraft, but deadly against armies on the ground, and especially against the Ukrainian.

Not that move a thousand armored vehicles and twelve thousand men is a great effort for Russia, perhaps only one other move in the chess game against Kiev, a warning to urge them not to attack the separatists again. 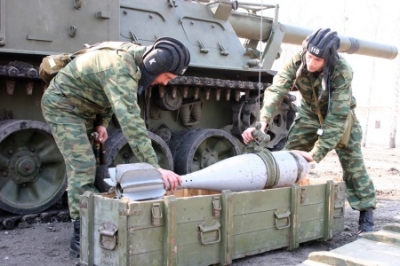 By the end of this year, two self-propelled high-power artillery divisions will be formed in one of the Southern Military District’s artillery units. One division will be equipped with 240-,, self-propelled Tulipan mortars and the second will be armed with 203-mm 2C7M Malka self-propelled artillery installations.
The highlight of the report by the Southern Military District’s press service is that we are dealing with quite old systems, a large part of which were pulled back into reserve in the 1990’s. Even a glance at the photo at the top of this article is enough to understand that we are talking about quite aged weapons systems.
Nevertheless, these are heavy-duty installations which still do not have any equivalent artillery analogues and are still of significant military value. This is true especially considering their undergoing modernization, which increases their accuracy at hitting targets located at a distance of dozens of kilometers.
Putting these artillery systems back in operation might indicate a certain adjustment in the plans of deploying Russian armed forces on the border with Ukraine given the extreme uncertainty of the military and political situation and the possibility of “surprises” from our so-called “Western partners.”
The risk of an unpredictable turn of events is probably being considered by the Russian command as highly relevant insofar as, along with planned rearming of the army with new military equipment, the military has resorted to increasing the combat power of troops by reactivating the arsenals of, albeit old, formidable weapons.
This is being done despite the fact that the most important benchmark of the current state program on rearming the army is none other than the distribution of new equipment. This might spoil a few planned indicators. But, apparently, the reality of the situation is such that these indicators are no longer seen as the main priority.

As can readily be seen by the current events, the world has not been this close to a nuclear war and World War 3 in a long time.  There are four major flashpoints right now that could easily escalate and ignite a powder keg, transforming from a regional conflict or conflicts into a world war: Syria, the South China Sea, Ukraine, and North and South Korea.  The “reconstruction” of a Cold War-type faceoff, initiated by the U.S. and NATO building up forces in Eastern Europe and facing off against Russia.

A nuclear war will be initiated by an EMP (Electromagnetic Pulse) detonation over the continental U.S., followed by a nuclear exchange and a war with conventional forces.

As of this writing, the U.S. has “mistakenly” bombed Syrian governmental military forces, causing at least 60 deaths with more than 100 others wounded.  The Russian government is sizzling, especially with the response by (of all people) Samantha Power, U.S. Ambassador to the UN had this to say to the media, as reported by CNN:


“We are investigating the incident.  If we determine that we did indeed strike Syrian military personnel, that was not our intention. And we of course regret the loss of life.”

True humanitarians, all, and especially she, the wife of Cass Sunstein and a true Marxist disciple of the Weather Underground (along with Cass) regrets the loss of life.  The airstrikes occurred just two days before the U.S. and Russia were supposed to have joint airstrikes against ISIS.  As ISIS is a creation of the U.S. State Department and the administration, it seems the U.S. decided to strike their true intended target…the Assad government forces…as it wants to topple Syria, and escalate things with the Russians.

Meanwhile last week, the U.S. flew two B-1B nuclear bombers along the DMZ to bluster North Korea with a show of force in response to the nuclear bomb test they conducted just a week prior.  South Korea also threatened to reduce Pyongyang to ashes, while North Korea prepares for yet another nuclear test in the near future.  More than 20 missile tests have been conducted by North Korea just this year alone.  This is not counting the satellite launch at the beginning of the year in which they placed their second satellite into orbit…a path of trajectory, mind you, that takes it over the continental U.S. several times per day.

Ukraine cease fire agreements between the populist forces (rebels) in the eastern provinces and the U.S.’s puppet Poroshenko-government has been violated innumerable times as the fighting in Donetsk continues.  In the meantime, the IMF just approved a 2-billion-dollar loan to Ukraine and the U.S. is supplying Poroshenko’s government with “nonlethal” U.S. military equipment.  Russia has been posturing a tremendous number of troops (some DOD estimates range as high as 150,000) on its western border facing Ukraine: they have conducted military exercises, including some within Crimea, which they annexed from Ukraine in 2014.
The United States has been beefing up its presence in the Baltic States of Latvia, Lithuania, and Estonia, as well as in Poland and Moldova, the latter emplacing U.S. missile systems for “defense” that can be converted to offensive, nuclear missiles in hours.  In addition to this, the U.S. is deploying B-61 nuclear bombs to Germany’s Buchel airbase.  Russia has countered with ordering the deployment of the Iskander-M missiles to Kaliningrad, Russia’s westernmost military base in a direct standoff against the U.S. buildup in Germany and Eastern Europe.
Meanwhile things in the South China Sea are heating up as the U.S. has moved naval assets into the area in a show of force in support of Japan over the disputed Senkaku islands face-off between Japan and China.  Last week the Russian navy linked its assets with China’s in the two countries’ joint naval exercises that could turn into a combat operation and a Chinese invasion at the drop of a hat.
There is a slow buildup and preparation of media coverage that is trying to paint Russia in the leading role of the aggressor in all of this.  It isn’t working, except with those who are ill-informed.  The bottom line: with the U.S. election year in complete disarray and civil unrest lurking as a result of social and economic breakdowns, a war would be the perfect thing to justifysuspension of the elections and the inculcation of martial law in the “interests of national security.”  The general civilian publics of all of the nations would be the ones to suffer, and it wouldn’t be the first time that it happened. Politicians – the ones who “regret the loss of life” in a war – are not the ones to lose their own lives or the lives of their children when the balloon goes up.