Power is gradually being turned back on across parts of South Australia, but much of the state remains in darkness after a widespread blackout.

But more wild weather is on the way, with an intense low-pressure system expected to cross the state today.

Late on Wednesday, emergency services had announced the following:

* Power is continuing to be restored overnight. Metro areas will be first
* People in the state's north are likely to be without power for "considerably longer than the rest of the state"
* There are no reports of deaths or serious injury
* Adelaide Metro trains are expected to be running from Thursday morning
* All schools in the state will be open, but some still without power may have different programs

Bureau of Meteorology senior forecaster Brett Gage said a severe weather warning remained current for widespread parts of the state, with the west coast of Eyre Peninsula in for a "real buffeting".

Winds in that region are expected to reach storm force, with predicted gusts of up to 140 kilometres per our.

"Gale force [winds] about the remainder of the coasts, except for the two South East coasts where we do have strong wind warnings current," he said.

A flood watch is in place for the state's Mid North, Mount Lofty Ranges and Adelaide with rain of 30mm to 60mm expected to hit, with some falls of 50mm to 100mm possible.

SA Power Networks spokesman Paul Roberts said power was being restored to some of Adelaide on Wednesday evening, but warned it would be a "gradual process".

He said people in the Mid North and Eyre Peninsula areas should prepare for extended power outages.

"That could well go into the the early hours of [Thursday] if not longer. This would be putting some stress on communications and I really recommend to people they minimise their use of mobile phones."

Mr Roberts said the storm front expected on Thursday is a big concern for the electricity network.

Optus and some Vodafone networks are also down across the state.

Mr Roberts said some equipment had been damaged around Blyth in the state's Mid North.

"There was some kind of mini-storm event, or cyclone event, there that's resulted in damage and that's affecting customers around the region.

"We have a substation there that would supply out to several areas."

Town takes a beating from storm

David Williams, from Blyth, said his town had taken a "beating".

"Basically it blew the veranda up over the top and took part of the roof and the chimneys … [there was] lots of noise. It was a bit scary," Mr Williams said.

He said he huddled in the kitchen as the wild wind passed over his home.
Mr Williams described the noise as "like a freight train".

"There's a lot of people without roofs tonight. It's taken a beating [Blyth]. It's not feeling too well. There's a fair few people hurting tonight."

The Country Fire Service (CFS) has sent a strike team to Blyth. The extent of damage is unknown at this stage.

Police have urged owners and occupiers of buildings to check if anyone is trapped in lifts after emergency services rescued 19 people from lifts.
Emergency services have already rescued a number of people who became trapped when the power shut down.

Premier Jay Weatherill said there had been 80,000 lightning strikes across the state.

"Some of them hit our electricity infrastructure including our generators. This is making the job of turning the power back on extremely hazardous and difficult."

He urged people not to travel on the roads "unless absolutely necessary" during the blackout.

Mr Weatherill said the weather event had "destructive wind gusts" which saw transmission poles pulled out of the ground.

Earlier in the day, he said there was an incident about 3:48pm "which has caused the failure of the entire South Australian electricity network".

He said the blackout had nothing to do with the recent closure of the Port Augusta power station.

"The system has behaved as it's meant to behave to protect the national energy market," Mr Weatherill said.

He said the statewide blackout occurred due to the massive damage to infrastructure which resulted in the sudden drop in energy frequency in the network. It triggered an automatic cut at the interconnector to protect the national network.

SA Power Networks‏@SAPowerNetworks
People in the red shaded area are supplied by damaged transmission lines – unlikely to have power tomorrow. 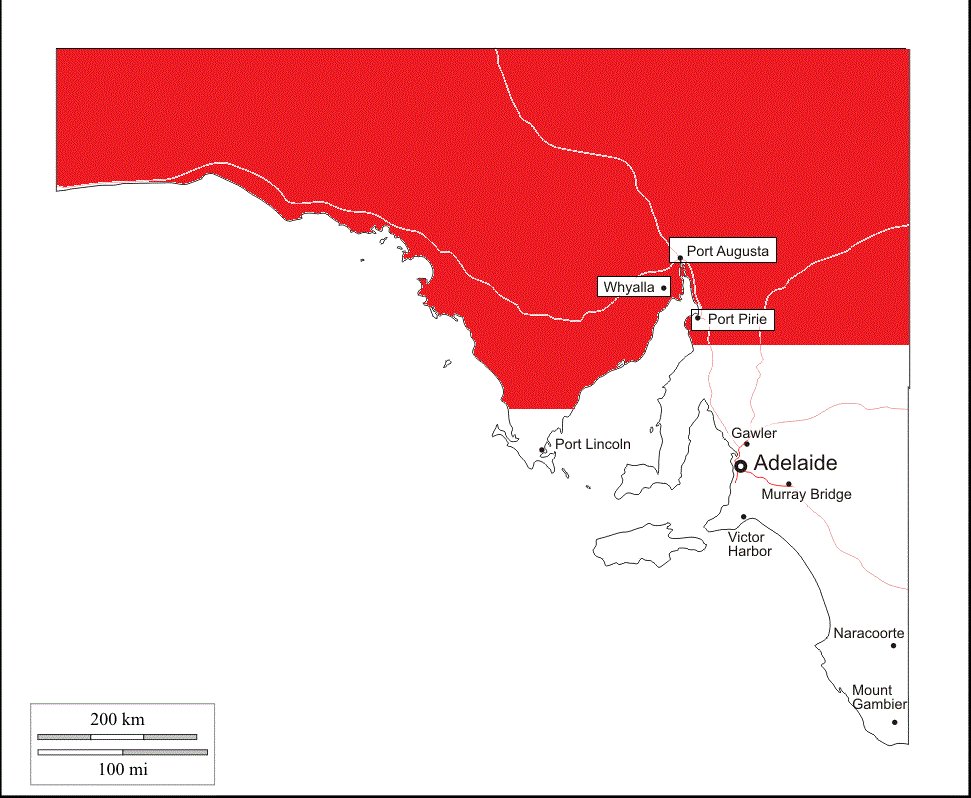 3:33 AM - 29 Sep 2016
Federal Energy Minister Josh Frydenberg said the Australian Energy Market Operator, which was responsible for the management of the National Electricity Market, was working closely with the relevant transmission network service provider, ElectraNet, to identify and understand the severity of the fault.

South Australian Senator Nick Xenophon told ABC News 24 that he understood power would not be restored to South Australia until 4:15am on Thursday.

"This is how not to do [transition to renewables]. I can't fathom ... I can't believe my state is in darkness at the moment. If heads have to roll, so be it," he said.
"We're looking at another 11 hours of darkness, and the consequences of that are just horrendous."

South Australian Police Commissioner Grant Stevens has declared the statewide power outage a major incident under the Emergency Management Act.
"We are confident that all of the emergency services and support agencies have sufficient resources," he said.

"We are currently experiencing extreme demand as a result of the weather event," he said.

"As a result we are dealing with a significant increase in emergency calls."
All train and tram services have stopped for safety reasons, with Adelaide Town Hall staying open to accommodate anyone who cannot get home.

SA Water said it had lost power to some of its pumping stations which was affecting its ability to deliver water and remove sewage to some customers.
Adelaide Airport said power had been restored but it was experiencing issues with its baggage system.

Waves as high as 12.92 m off the coast of Australia on September 28, 2016. Created by Sam Carana for Arctic-news.blogspot.com 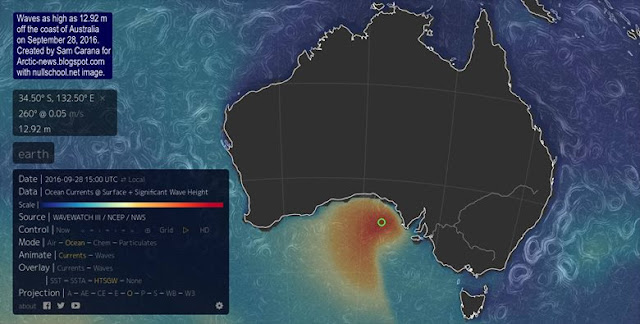 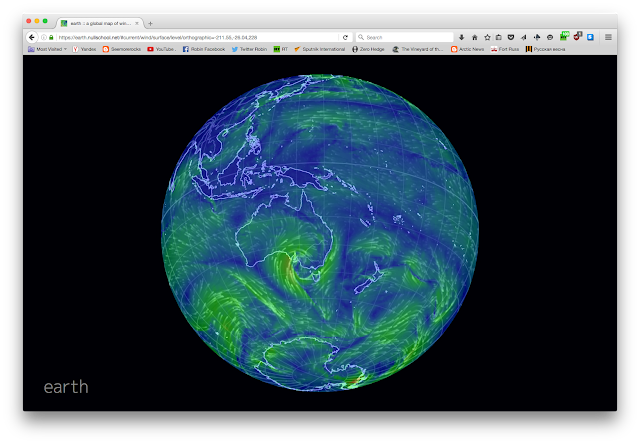 South Australia blackout: entire state left without power after storms
Power restored to much of metropolitan area by late on Wednesday, but some parts of the state expected to be without electricity until Thursday morning

South Australia was weathering a statewide blackout on Wednesday night after one of the most extreme weather systems in decades cut power to the entire state.

Power went out across the state at about 3.45pm on Wednesday afternoon in the midst of drenching rains, lightning and thunder.

By late on Wednesday, power had been restored to much of the Adelaide metropolitan area and only the northern parts of the state and the Eyre Peninsula were expected to be without services into Thursday.

“Once the metro area is supplied this will provide sufficient network stability for us to start the process of restoring supply to country areas.”

An incident involving infrastructure near Port Augusta at 3.48pm on Wednesday prompted the failure of the entire SA network, the South Australian premier, Jay Weatherill, said.

The premier said the state’s energy generation assets remained intact and there did not appear to be any damage to the interconnector with Victoria.

He said people across SA should brace for several hours without electricity despite some outer Adelaide suburbs having services restored by about 7pm.

Weatherill said the system worked as it was designed to and rejected suggestions it was the result of SA’s high use of wind power or the decision to shutdown coal-fired power stations in the mid north.

“What happens is the system protects itself by tripping all the generators in the system and also by severing the interconnector with Victoria,” he told reporters.

“It then triggers a protocol about how we bring it back up. There are a series of back-up generators which gradually re-power the system.

“Once the system is balanced then power is restored.

“This would happen to any system anywhere in the world if they had a similar circumstance.”

The blackout prompted police to call for people to avoid travel if possible as roads in the centre of Adelaide and the suburbs became gridlocked. Patrols were also dispatched to direct traffic at major intersections amid reports of widespread accidents.

All metropolitan train services were cancelled with buses made available for some commuters. Some buildings had emergency generators and authorities said hospitals were operating as normal on back-up power.

The blackout came as strong winds and heavy rain lashed parts of SA with the Bureau of Meteorology warning super cell thunderstorms were possible across the central and mid-north districts. The bureau issued a severe thunderstorm warning for an area stretching from the Riverland to Marree.

It said super cells within those storms could produce wind gusts up to 140km/h along with heavy rain that could cause flash flooding.

The extreme weather reached the city about midday and was expected to dump up to 100mm of rain in some areas, including the Adelaide Hills, where a flood warning was in place.

Similar falls were possible in the mid north with the cyclonic conditions expected to whip up large swells along the state’s coast, producing 10-metre waves.

By late afternoon the State Emergency Service had responded to more than 330 calls for help, most because of fallen trees or rising water.

The bureau said the wild weather was the result of a front and intense low-pressure system.

It said records suggest such a severe system was last reported across SA more than 50 years ago.

Local media reported that operators of SA’s high-voltage power network, ElectraNet, were in an emergency talks to attempt to reach a solution to the “unprecedented electricity collapse”.

The cause was believed to be a Mid North high-voltage transmission tower toppling over in the severe weather.

“Please avoid travel if you can due to statewide power outage. Be patient and obey the direction of police manning intersections. Take care.”

Electric trains, trams and traffic lights were also down across Adelaide, causing gridlock. 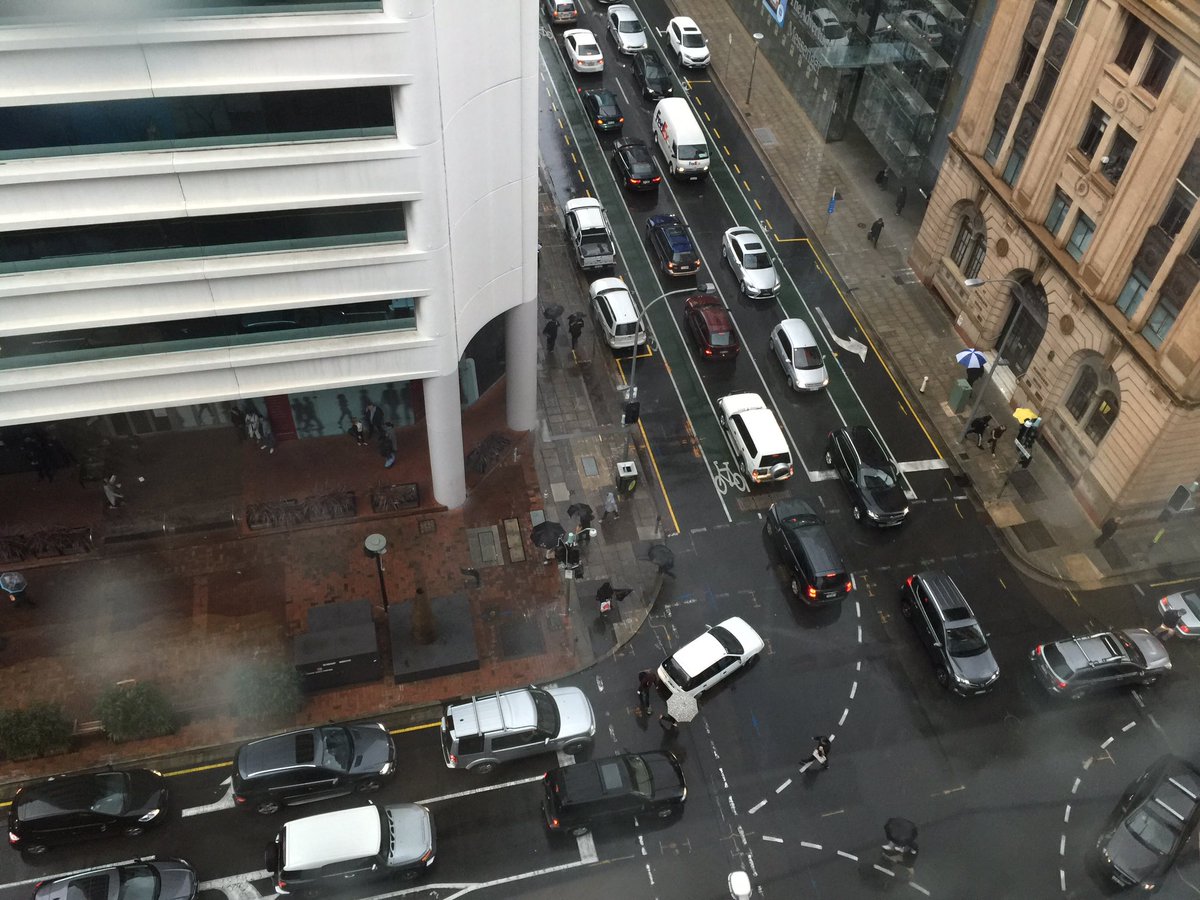 Adelaide Metro tweeted that staff were available to help commuters with travel plans at Adelaide railway station and North Terrace.

The Adelaide Oval confirmed that all of Wednesday night’s functions had been cancelled and its restaurant would also close.

The Bureau of Meteorology had forecast that thunderstorms would reach Adelaide around 4pm, with destructive wind, heavy rainfall and possible flash-flooding.

It issued a severe thunderstorm warning for the state’s west coast and large parts of the Eyre peninsula just after 3.20pm.

It warned of the potential for flash flooding and damaging wind gusts of up to 140 km/h in several parts of the state as the weather system moved east over the course of the day.

A thunderstorm in Cleve produced large hailstones, a wind gust of 87 km/h and 14mm of rainfall in just 15 minutes earlier in the afternoon.

Fiona Clark‏@fionaclark10
Looks like the #adelaidestorm is just about to bring its A-Game. 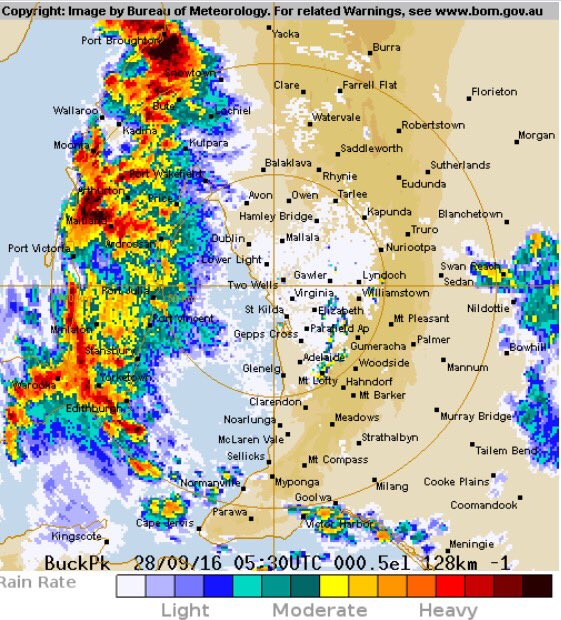 SA Power Networks had earlier warned that power outages were probable and that some could be long.