The Dutch have announced the results of their bogus inquiry. Guess who’s to blame.

RT,
28 September, 2016
While international investigators suspect Russia of supplying rebels with the Buk missile system that downed Malaysia Airlines flight MH17 over eastern Ukraine in 2014, a lawyer representing four victims’ families in relation to the case blames Kiev for the tragedy.
In July, four relatives of victims in the Boeing 777 crash filed lawsuits in the European Court of Human Rights (ECHR) against Ukraine for Kiev’s failure to close down its airspace amid a raging conflict in the east of the country. 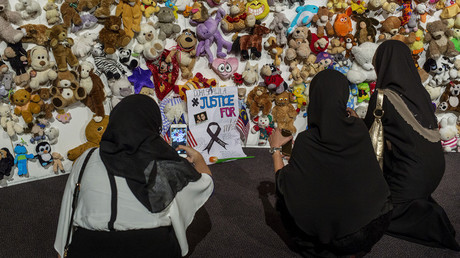 ‘Failed to protect life’: Court green-lights MH17 relatives’ lawsuit against Ukraine
The lawsuit filed by German citizens Elena Ioppa and Tim Laushet, living in Australia, as well as Chris and Denise Kenke, seeks €1 million ($1.1mn) in compensation for the crash which claimed the lives of 15 crew members and 283 passengers, including 80 children.
“Our argument is that the Ukrainian government was completely aware of what happened on the ground, that there was a separatist movement. They obviously knew about the equipment they had. That the equipment could reach higher altitudes, because the government closed the airspace two days before the downing of MH17. It closed the airspace after the level of 6,600 meters which is not enough because given the size of the danger the whole airspace should have been closed,” Elmar Giemulla, the victim’s lawyer and leading expert on air law told RT.

When asked by RT correspondent Paula Slier if Ukraine “could be to blame” for the MH17 tragedy, Giemulla emphasized that “whoever shot or pushed the button of the missile – this is not relevant for my case,” because the aim of the lawsuit is to create a strong precedent in international civil aviation making government responsible for sky safety over its territory, the lawyer said, adding that “of course” the relatives of the victims want to find the responsible party as well.

Giemulla’s comments come the same day as a Dutch-led Joint Investigation Team (JIT) report concluded that the Buk missile that was allegedly used by the rebels in Ukraine to take down the Boeing was taken to Ukraine from Russian territory.

Moscow has challenged the conclusions of the Dutch probe saying that there isn’t enough evidence, accusing Ukraine of fabrication and JIT for completely disregarding Russian data and intelligence pertaining to the incident. The victims’ lawyer told RT that MH17 would never have been downed if Kiev had acted more responsibly.

“Each country is responsible not just for the state area on the ground. The airspace belongs to the state area and that is why each government is fully responsible for the security of its own airspace. This is what the government of Ukraine has neglected and this is why hundreds of people had to die,” Giemulla said.

The lawyer hopes that Kiev will respond to the ECHR by the mid-November deadline, presenting their defense in the case. So far, Giemulla, says Kiev has not officially denied any of the accusations presented in the lawsuit.