"Something grave has happened between Russia and Syria with regard to Syria behind the scenes.

Analysts everywhere are saying "something very serious is going on".


For now I have chosen Steven ben-Nun of Israeli News as a source. I do not relate in the slightest to his Jewish messianism or his defence of Israeli. He is, however, a serious and mostly reliable source and worthwhile listening to.

'Something Very Serious Transpired' Between Russia and US Over Syria
The current "level of violence in verbal attacks" on Russia at the UN is unprecedented," Gilbert Doctorow, European Coordinator for the American Committee for East West Accord told Radio Sputnik, adding that this seems to indicate that something grave must have happened between the two countries with regard to Syria behind the scenes. 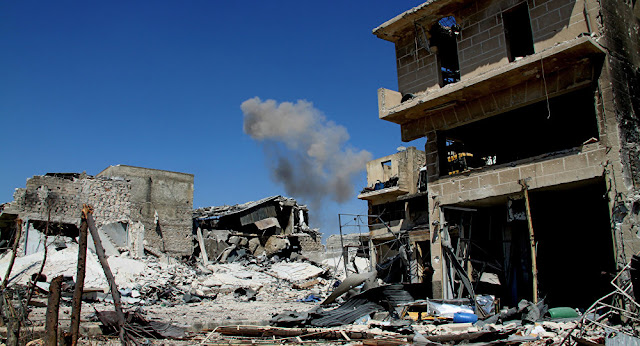 The United States and Russia have lashed at each other over the Syrian conflict, with Washington and Moscow trading blows at the urgent UN Security Council meeting on Sunday.


US Ambassador to the UN Samantha Power, who has never been known "for her diplomatic talent," as Doctorow put it, accused Russia of "barbarism" in Syria. She added that Moscow and Damascus ostensibly "make war" instead of "pursuing peace." She also blamed both governments for "bombing the humanitarian convoys, hospitals and first responders who are trying desperately to keep people alive."

"We reached a new low," the analyst said.

Doctorow described the US' behavior at the UN as "rude." He also noted that such rhetoric has been absent from the UN Security Council meetings for decades. We have not seen "this level of open hostility and direct name calling" since 1985.

"The violence of this, the extreme hostility implicit in these actions suggests that something more is going on between the two sides than we find on the front pages of the newspapers," the analyst observed. Latest developments seem to point that "something very serious has transpired between Russia, the United States and its closes allies over Syria – far more serious than what has been in the public domain."

Doctorow further said that the US-coalition airstrike on the Syrian Arab Army in Deir ez-Zor and the SAA resuming air raids in Aleppo are not sufficient to explain this level of verbal hostility.

On Monday, Damascus said that the Syrian intelligence services have an audio recoding of communications between US forces and Daesh prior to Deir ez-Zor attack that claimed the lives of at least 62 Syrian servicemen on September 17.

"It could be true, but it will have no implications because truth is the least of the factors on the playing field today," the analyst noted.

Doctorow recalled that the Western media did not cover the Russian Defense Ministry's press briefing over Daesh's illegal oil trade with Turkey.

"That was dramatic. It was a fantastic demonstration. What was the result? Zero. There was no coverage in the Western press although all of NATO military attaches in Moscow were scribbling furiously and taking as many photos of the Russian flights as they could," he said.

In Doctorow's opinion, the Syrians and the Russians "can prove anything they like," but mainstream media in the West will "totally" ignore it. "That is a sad fact today. This is why force and not diplomacy seems to be resolving the question or seems to be addressing the question of what future Syria has. Diplomacy has only been decorative."
DEFCON fails to raise the Nuclear Threat Level

With the two largest Nuclear powers Russia, and The United States pulling out their Nuclear arsenals and verbal attacks between the two at the UN security Council meetings one would think that DEFCON would raise the alert level. Sputnik's latest headlines read as: 'Something Very Serious Transpired' Between Russia and US Over Syria

But what was so serious is still silent in western media CNN, FOX and others seem to have been told to stand down for fear that the their campaign of disinformation will be compromised regarding Syria to know that the Obama Administration is actively involved in supporting the Terrorist.
Read more: https://sputniknews.com/politics/2016...
https://www.rt.com/usa/360758-nato-nu...
https://en.wikipedia.org/wiki/LGM-30_...

URGENT Breaking News: Russia Strikes Back - We Are at WAR