More on Kerry tearing up his agreement with Lavrov 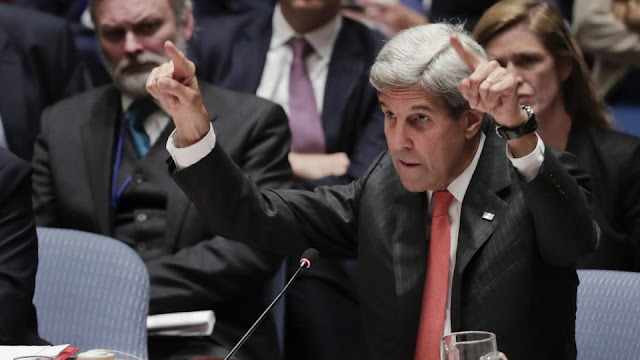 In comments to the UN Security Council US Secretary of State Kerry effectively tears up Lavrov - Kerry Agreement and demands that protection from bombing be extended to Al-Qaeda's regional branch Jabhat Al-Nusra.

The impossibility of achieving a workable ceasefire in Syria was made clear by a blustering speech US Secretary of State Kerry made to the UN Security Council on 21st September 2016.

Possibly alarmed that European governments – including especially the German government – are failing to support US claims the relief convoy attacked near Aleppo was bombed by the Russian air force; and by the fact that the UN appears to have dropped its assertion that the convoy was bombed from the air; and perhaps even more alarmed by Russian demands for an independent investigation of the whole incident; Kerry went on the attack, listing what he said were Russian claims about the incident, which he either misrepresented, or represented in such a way as to make them look inconsistent and contradictory, when in reality they are no such thing.


More to the point, Kerry also demanded the grounding of the Syrian air force over what he called ‘the contested areas’ of northern Syria.

This is a strange demand to make in the immediate aftermath of the attack on the relief convoy.

The US says off-the-record that it was the Russian air force that attacked the convoy. However Kerry is demanding that the Syrian air force – which no one claims carried out the attack – should be the one to be grounded.

Presumably somebody subsequently realised the lack of logic in this demand, since some Western media reports of Kerry’s comments are giving the impression that Kerry demanded the grounding of both the Syrian and the Russian air forces. The full text of his remarks released by the US State Department however shows this was not the case.

Putting all that aside, Kerry speech was in essence a reversion to a demand the US made following the previous cessation of hostilities agreement in February: that the Syrian air force – and implicitly also the Russian air force – cease bombing Jabhat Al-Nusra even though Jabhat Al-Nusra is a terrorist organisation which is expressly excluded from the ceasefire. Here is how Kerry justified it

“Now, I have said to Russia many times it’s very hard to separate people when they are being bombed indiscriminately and when Assad has the right to determine who he’s going to bomb, because he can, quote, “go after Nusrah” but go after the opposition at the same time because he wants to. You create a confusion that is impossible to separate out, and therefore preserve the ceasefire.

So we need to get to the prohibition on flying, my friends. That would prevent Syria from doing what it has done so often in the past, which is to attack civilian targets with the excuse that it is just going after Nusrah. Our purpose in this negotiation was to put an end to the kind of horrific and indiscriminate attacks that have been the primary cause of fear, of suffering, of displacement. And under our plan, all of this could be quickly accompanied by serious negotiations between the parties aimed at a political transition and a conclusion to the conflict.”

In other words what Kerry is demanding is that the Syrians and the Russians agree to impose a no-fly zone on themselves so as to let Jabhat Al-Nusra and the Jihadis win in order to enable regime change to take place in Syria.

That is an absurd demand, and Kerry surely knows it. It is also one which – as Kerry of course also knows – the Russians have consistently and categorically rejected whenever it has been made to them. That Kerry is making it now in spite of all that shows that the US has abandoned the commitment to separate the fighters it supports from Jabhat Al-Nusra, which it made just 2 weeks ago in Geneva.

The US is still trying to reassure its European allies – who are becoming increasingly alarmed by the unravelling of the agreement – that it remains committed to it, and that there is still some life in it. Kerry’s words to the UN Security Council however tell a different story.

This latest attempt to end the war in Syria diplomatically has therefore failed, and the war is set to continue.

In the meantime it is worth emphasising that no less a person than the US Secretary of State has now publicly said in the UN Security Council that Jabhat Al-Nusra – an entity which the US says is a terrorist organisation and which is the regional branch of Al-Qaeda in Syria – the organisation which carried out the 9/11 terrorist attacks – should not be bombed.

Another tale about John Kerry - from February


John Kerry ATTACKED in Rome for SUPPORTING the expansion of ISIS

John Kerry went to Italy for a conference with Italian foreign Minister Paolo Gentiloni where Kerry almost received a black eye for his comments!

So he went there to talk to Gentiloni about new ways to fight ISIS terrorists. However, Kerry supposedly supports the expansion of ISIS to which one of the reporters in the conference got up and charged at him with a “It was YOU who created ISIS!”. Fists raised and fire in her eyes, Kerry almost got a black eye!

Well if he did help create ISIS and really wants to support it, I can’t say he wouldn’t have deserved it if she gave him a black eye! Yet, she was simply escorted out and left the room.

KERRY URGES FOR NO FLY ZONES IN SYRIA TO SAVE TRUCE, DELIVERS OF HUMANITARIAN AID At a UN Security Council meeting, the US Secretary of State, John Kerry, blamed President Bashar Assad for violations of the ceasefire in Syria and added that Assad “does not believe in ceasefire.”
This is why, according to the US official, the Syrian Air Force should be banned from flying over territories held by the so-called “moderate opposition” (most likely Kerry meant Jabhat al-Nusra or Jund al-Aqsa).

Kerry emphasized that this shouldbe done in order to deliver humanitarian aid in northern Syria.
He also said that the attack on the aid convoy raise “profound doubt” over whether Russia and Syria would live up to the Geneva deal. Unofrutnately, he forgot to added that there are no proves that the convoy was attacked by Russian or Syrian warplanes (more here).

In general, such a statement show that the US is not going to search a solution of the Syrian crisis by peaceful measures and just pushing own agenda on the diplomatic level
Posted by seemorerocks at 17:12