Is this the end of diplomacy?

Russian FM Lavrov, “no more unilateral concessions” in Syria until US proves its separating moderates from terrorists 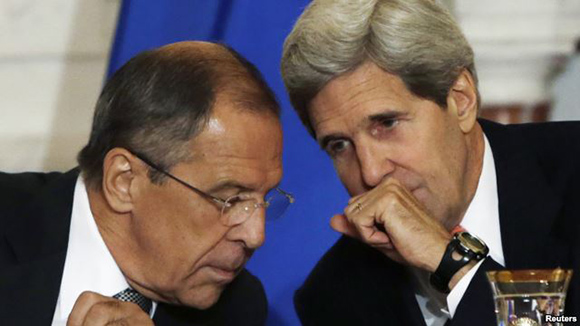 In an interview with Russia TV Vesti v Subbotu, Foreign Minister Sergey Lavrov said that Russia will “no longer take seriously” requests to make unilateral concessions in Syria, without finally seeing the US coalition, once and for all, separate “moderate rebels” from terrorists.

Of course Lavrov, and by now the whole awake world, knows that there is no such thing as “moderate rebels” in Syria, leaving the US in a bit of a bind.
Either John Kerry will have to find and embed some “moderate rebels”, to then separate from the Al Nusra / Al Qaeda jihadists…or Kerry will have to see his on-the-ground Al Nusra terrorist proxy face extinction at the hands of the Syrian army and Russian air support.

During the Vesti v Subbotu interview Lavrov reiterated that…

“The revival of the ceasefire is possible exclusively on collective basis.

If the US and its coalition partners fail to provide credible proof that they have a sincere intention to dissociate terrorists from the so-called moderate opposition, our suspicions that this all is being done to take the heat off Al-Nusra Front will strengthen.”

In other words…America better begin separating the skittles, or finally admit that the entire “moderate rebels” thing is a complete sham.

RT reports that while Lavrov is urging America to take action and deliver on its promises, what is currently taking place in Syria is the exact opposite of a separation..

The events of the past few days, however, showed the reverse trend, as more rebel groups started merging with Al-Nusra Front, Lavrov said, citing a statement from Russia’s General Staff.

One of such radical groups close to Al-Nusra Front is Ahrar Al-Sham, which refused to adhere to the Russia-US agreement as the deal targets its ally, Lavrov said. Russia has been demanding it be designated terrorist for a long time, to little effect.

“If everything again boils down to asking Russia’s and Syria’s Air Forces to take unilateral steps – such as, ‘Give us another three- or four-day pause and after that we will persuade all opposition groups that this is serious and that they must cut ties with Al-Nusra Front’ – such talk will not be taken seriously by us anymore,” the Russian FM said.

He noted that previous US-Russia-brokered short-term ceasefires around Aleppo did not live up to expectations and proved detrimental to peace efforts, as the 48-hour and 72-hour temporary truces were “used to back up the jihadists, including, Al-Nusra Front fighters, with manpower, food and weapons supplies.”

Russian Foreign Minister, Sergei Lavrov made history today at the UN's meeting of the Security Council, declaring that future unilateral pauses couched as 'ceasefire agreements' are off the table. He has skillfully referred to the mounting factual evidence of the US's continued flagrant violations on any number of points of agreement over the course of this conflict.
These include primarily the violations of the ceasefire itself, in conjunction with officially leaked elements of the 'secret text' of the recent ceasefire which evidence that the US has been unable to reign in a number of groups signing onto previous ceasefires, let alone those groups the US claims to be moderates but did not sign onto the ceasefire, both of which continue to work closely with either ISIS or Jabat Al-Nusra. Russia has no doubt pointed out successfully that several of these groups are fictional entities, and are but operational synonyms of Al-Nusra (formerly called Al-Qaeda of the Levant), itself.
The impossible to ignore context here naturally is the ceasefire ending US joint attack alongside ISIS upon the Syrian Arab Army position at Deir ez-Zor which was sustained and lasted over an hour, despite calls from the Russian coordinating hotline which existed pursuant to standing agreements on deconfliction.
The other defining circumstances included the response of the US State Department at the emergency session of the UN Security Council a few nights ago, in particular the behaviour and callously undiplomatic remarks of representative Power, and the US's following attempts to blame Russia for the attack on the Red Crescent aid convoy several days later, which increasingly appears as the result of either Al-Nusra militants on the ground or a US predator drone attack using an incendiary device.

Analysts and activists have long debated the utility of the ceasefire agreements. It had been noted, at times passionately, that the ceasefires were observed unilaterally by Russia and had the effect of allowing the US backed terrorist groups, whether organized under the 'moderate' banner or not, to rearm and regroup. Aid convoys had long been used as a backdoor to smuggle in needed dual-use basic supplies for repairing weapons, such as nuts, bolts, wiring - and even munitions and new weapons. It had long been documented that first aid and medicines intended for affected civilian populations generally wound up used by terrorist fighting groups inside of occupied parts of Aleppo. 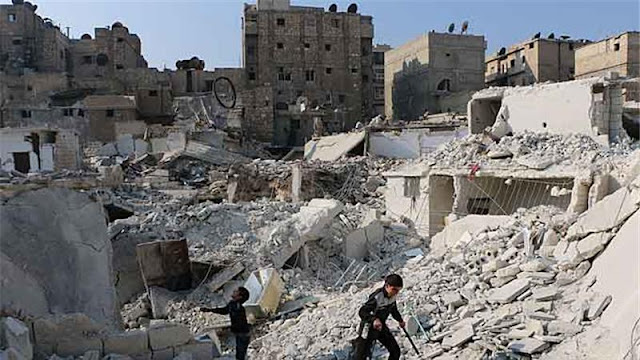 Now this chapter comes to end, and it is revealed that Russia understood clearly all along that this was precisely the case. What was needed was a pretext, a consensus building show-and-tell to the Security Council which provides Russia and its allies on the Security Council and in the international community that 'we tried Ceasefires - and this is what happened.
This set up the footwork for the final proverbial 'flying mare' that launched US foreign policy and its media hologram over the Russian bear's shoulder and onto its back.
A real corner has been turned. We invite our readers to watch twitter user Navsteva's several minute long clip, below, which was truly the highlight of the longer Russian presentation and today's historic Security Council meeting.
These are truly interesting times, fraught with danger, as the chance of total war looms overhead. We ask our readers to be especially vigilant as events are escalating, and help our important mission and work here by sharing these articles across your social networking platforms.

We fly you don’t! US wants no fly zone over Syria, but only for the Russian and Syrian jets