The story of Aleppo NOT being told by MSM

Battle for Aleppo: US-Backed Rebels Shut Off Water for 1.5 Million Civilians
The so-called "moderate" rebels turned off the water to 1.5 million civilians living in West Aleppo in retaliation for a Syrian Army airstrike on East Aleppo that allegedly left 250,000 residents without water setting the stage for an unprecedented humanitarian catastrophe. 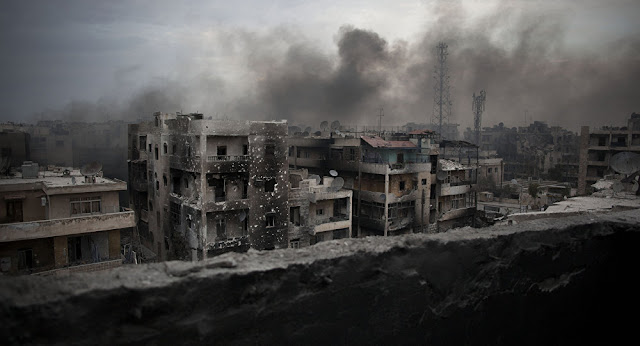 The city of Aleppo is “dying” according to United Nations officials after a fierce wave of bombing last night by the Syrian Army in an attempt to break the stalemate in what once was the economic capital of the country but is now left to rubble after years of combat between the Assad government and rebels.

Last night’s airstrikes according to early reporting by the United Nations left 115 dead as hostilities have intensified following the collapse of the ceasefire earlier this week resulting in large part from a US-led coalition airstrike on a Syrian Army base in Deir Ez-Zor that left 62 dead and hundreds injured "paving the way" for a major offensive by Daesh (ISIS) terrorists and over 300 ceasefire violations by the rebels.

The rebels signaled in the day before the ceasefire that they would not comply with the agreement brokered by the United States and Russia with the second largest rebel group Ahrar al-Sham even saying that it was “impossible” for the group to breakaway from al-Nusra Front terrorists (formerly Syria’s al-Qaeda affiliate prior to a rebranding effort) because the two groups had become too entangled fighting under the common banner of the Army of Conquest.

With hopes for peace on hold Syrian airstrikes have escalated which the rebels claim undermined attempts to repair a water pump supplying rebel-held districts in East Aleppo with water allegedly blocking the flow of the vital resource to some 250,000 residents.

n an act of reprisal, the rebels switched off the Suleiman al-Halabi pumping station that provides water to 1.5 million Syrian civilians in government controlled West Aleppo raising the possibility of an unprecedented humanitarian crisis in what has already turned into the largest displacement of civilians in human history.

"Then in retaliation for that attack a nearby pumping station that pumps water to the entire western part of the city – upwards to 1.5 million people – was deliberately switched off," said Dwyer.

UNICEF fears that families in West Aleppo will be forced to use contaminated liquid carrying waterborne diseases to which children are particularly vulnerable as a result of the intentional act of terroristic sabotage by the rebels in contravention of international humanitarian standards.

"Aleppo is slowly dying, and the world is watching, and the water is being cut off and bombed – it’s just the latest act of inhumanity," said UNICEF Deputy