Escalation of violence in Syria - a question of motivation


By Moon Of Alabama 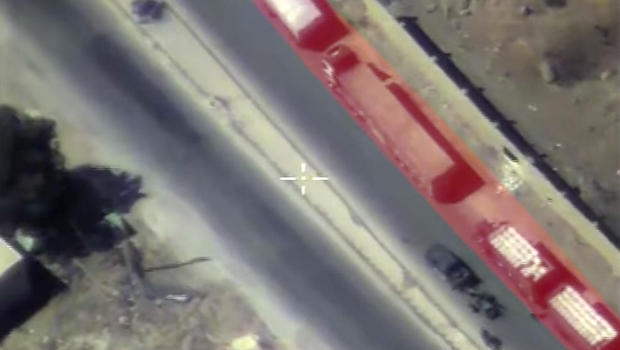 The show-down over the damaged aid convoy west of Aleppo is reaching comedy level.

The UN/SRC convoy came from the government held west-Aleppo. It had reached a Syrian Red Crescent center in Umm al Kubra in the "rebel" held area further west where it started to unload. Something happened and many of the trucks burned or where otherwise damaged. Allegedly some 20 people were killed. The incident happened shortly after the ceasefire had officially expired. U.S. sponsored "White Helmet" propaganda teams where there when or shortly after the incident happened.

Here are various claims that were made about the incident (I am time restricted and will for now not provide links for each of these):

The U.S. and its allies claim that the convoy was bombed in an air attack. The Russians deny that they or the Syrians executed any such attack.

The "rebels" had various version. Syrian jets AND helicopters did it; "Barrel bombs" were used; a sustained attack over hours ...

U.S. Secretary of State first claimed that the Syrian did it, than that the Russians did it; helicopters had attacked. The Pentagon then came up with two Russian SU-24 fixed wing aircraft as the culprits. But the U.S. then claimed that the attack went on over two hours which is longer than a pair of SU-24 could sustain.

The Russians said neither they nor the Syrians attacked. They alleged that "rebels" attacked the convoy; that there had been no bombs, only damage from fire.

The pictures of some trucks show damage that is mostly from fire, but there also seem to have been some explosions and shrapnel impacts though no big direct hits. For me that leaves both possibilities open - an air or artillery attack or a simple local sabotage operation.

I don't know what really happened.

But independent from what happened is the question of motive.

A few days ago the "rebels" had accused the UN, which had goods on the convoy, of partisanship and said they would boycott it. "Rebels" in east Aleppo had demonstrated against UN provided help and said they would reject it. There was a general rejection of the ceasefire by the "rebels" and they were eager to push for a wider and bigger war against Syria and its allies. Al-Qaeda in Syria even made a video against the ceasefire. A part of the ceasefire deal is to commonly fight al-Qaeda. They naturally want the deal to end. The attack on the aid convoy seems to help their case.

The motive argument makes an attack by the "rebels" plausible and an attack by Syria and its allies implausible.

Kerry spoke at the UN today and performed some funny stunts that had the silly purpose of blaming Russia.

Kerry then demanded a no fly zone over north-west Syria to prevent attacks on aid convoys. The whole UN erupted in laughter (silently). Surely he would love that. His "rebels" could then rearm, regroup and openly prepare for new attacks as they did under the first ceasefire in February. No, Russia and Syria will not again agree to that, nor will the UN Security Council. The demand was a lame joke.

But the gloves are coming off. The Syrian/Russian side is convinced that the U.S. willfully attacked Syrian forces in Deir Ezzor to hand the city to ISIS. The "rebel"/U.S. side (or their relevant public) will convince itself (despite lack of evidence) that the Syrian/Russian side is willfully attacking hospitals and humanitarian convoys. The words in front of the UN got markedly sharper.
I am afraid that we will soon see another serious escalation of the conflict. An incident between U.S. and Russian planes or something like that. This is playing with fire in a room full of dynamite.

This show is no longer about Syria. The conflict is now part of the U.S. election campaign. It is also about some very stupid need of some adolescent nations to prove to the world that their balls are the biggest. Stupid and deadly nonsense that will kill many bystanders and solve nothing.