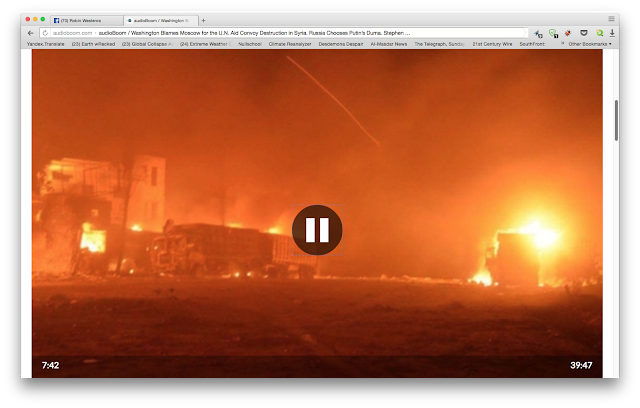 U.S. intelligence agencies believe that Russian aircraft conducted the strike that targeted a humanitarian aid convoy in northern Syria on Monday, according to U.S. officials, challenging Russia’s assertion that it wasn’t behind the attack.

The attack stoked doubts within the Obama administration that it can trust Moscow to meet its obligations under the two countries’ cease-fire deal, U.S. officials said, though Secretary of State John Kerry and U.N. officials said Tuesday the truce isn’t dead.

Mr. Kerry initially said Syrian forces were “evidently” responsible for the convoy attack, which killed at least 12 people. The U.S. officials said new intelligence indicates that Russian forces, rather than the Syrians, conducted the strike.

http://www.wsj.com/articles/u-s-believes-russia-bombed-syrian-aid-convoy-
1474400403
____________
http://www.reuters.com/article/us-mideast-crisis-syria-idUSKCN11Q1NR
________________
Our Beirut bureau chief, Anne Barnard, has written about the Syrian Red Crescent and the risks its volunteers take to deliver aid to people on all sides of the war.

The convoy attack and the declaration by the military were the strongest signs yet of the gradual unraveling of a broader agreement between Russia and the United States aimed at restarting peace talks to end the conflict in Syria, which has killed an estimated 500,000 people and displaced millions.

The Times chronicled the seven-day cease-fire negotiated by Washington and Moscow — which back opposite sides in the conflict — through the observations of Syrians around the country. By Day 5, it was clear the agreement was unraveling.
_____________
At least 12 aid workers, unknown number of civilians killed in airstrike after Syria declares end to cease-fire

The Obama administration said the strike was probably launched by the Syrian government or Russia. It could spell the real end of the U.S.-Russia cease-fire agreement, which was intended to allow aid to reach Syrian civilians.

By Karen DeYoung and Erin Cunningham39 minutes ago

____________
The ruling United Russia party wins the elections to the State Duma on party lists with 54.28 percent of the votes after 93.06 percent of ballots counted, Central Election Commission head Ella Pamfilova said on Sept. 19.

No other party has overcome the 5 percent threshold for entry into the parliament on party tickets.