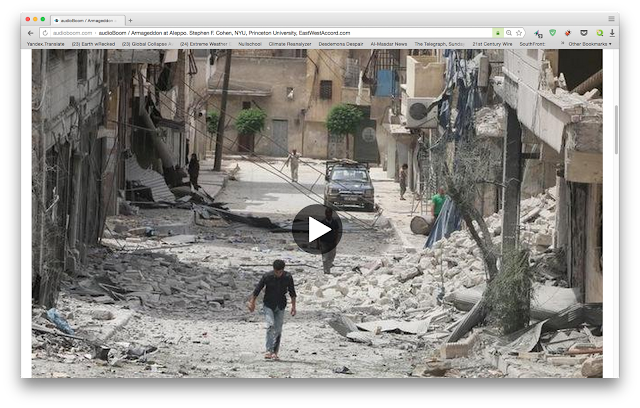 “…The bombardment of Aleppo entered a fifth consecutive day on Monday, after 95 people were killed in the east of the city on Sunday, according to doctors. A tally from local hospitals put the number of wounded at 398, including 61 children.
“What has happened over the last three days is indescribable,” said Mohammad Abu Rajab, a doctor in one of the largest medical centres in eastern Aleppo. “Words fail, pictures fail, everything fails.”

“Imagine the dead lying in the corridors, corpses and wounded and blood flowing everywhere,” he said. “We are standing before inhumanity, real massacres, extraordinary weapons whose blasts we never heard before, never heard before ever, they make the ground shake beneath our feet.”

“We note the overall unacceptable tone and rhetoric of the representatives of the United Kingdom and the United States, which can damage and harm our relations,” Peskov told reporters.

At the security council meeting, Rycroft’s French counterpart, François Delattre, said the use of bunker-busters and incendiaries on urban residential areas was a war crime.

“They must not be unpunished,” he said. “Impunity is simply not an option in Syria.”…