The Fars News has reported that ‘The Russian warships fired three Caliber missiles at the foreign officers' coordination operations room in Dar Ezza region, killing 30 Israeli and western officers’. The US military along with its allies created the Field Operations Room in the Aleppo region, which was filled with intelligence services’ staff. Members of the US, British, Israeli, Turkish, Saudi Arabian and Qatari intelligence services operated there.

Michel Chossudovsky, Professor of Economics at the University of Ottawa, Founder and Director of the Centre for Research on Globalization, Montreal, explained that intelligence facility was attacked by Russia in the immediate wake of the US Air Strikes against Syrian forces at Deir ez-Zor in support of the ISIS terrorists. The operations centre was located in the Western part of Aleppo province at the Sam'an mountain, where there are a lot of old caves.

The region is deep into a chain of mountains. The centre was used to coordinate acts on the ground with the reconnaissance acts of drones as well as to carry out air strikes. According to the Fars, personnel of the intelligence services was involved in the US Air Forces’ attack on the Syrian forces, which was carried out just after armistice agreements had been reached in Geneva. 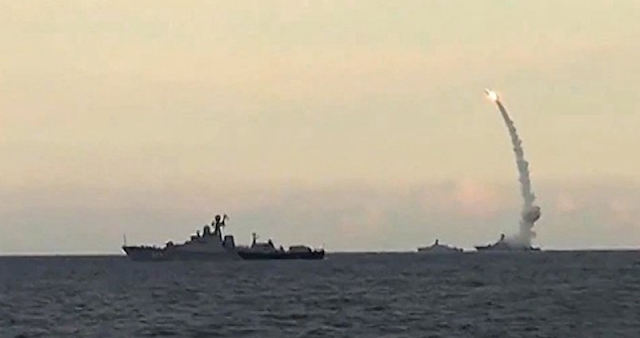 By Prof Michel Chossudovsky
Global Research, September 22, 2016
The US and its allies  had  established a Field Operations Room in the Aleppo region integrated by intelligence personnel. Until it was targeted by a Russian missile attack on September 20,  this “semi-secret” facility was operated by US, British, Israeli, Turkish, Saudi and Qatari intelligence personnel.

According to Fars News, this intelligence facility was attacked by Russia in the immediate wake of the US Air Strikes against Syrian SAA forces at Deir Ezzor in support of the ISIS-Daesh terrorists. “The Russian warships stationed in Syria’s coastal waters targeted and destroyed a foreign military operations room,killing over two dozen Israeli and western intelligence officers”

The operations room was located in the Western part of Aleppo province in the middle of sky-high Sam’an mountain and old caves. The region is deep into a chain of mountains.

The Fars report conveys the impression that the Operations Room was largely integrated by Israelis. In all likelihood, the US was “calling the shots” and the facility was coordinated by Washington’s regional allies, in close liaison with (and on behalf) of the US military and intelligence apparatus.

With the exception of the Fars report and Sputnik Arabic, this Russian attack directed against a US-led coalition intelligence facility has not made the headlines. In fact there has been a total news blackout. The accuracy of the Fars report is yet to be fully ascertained.

What is significant is that the Operations Room situated in rebel held territory in the Aleppo region is manned by the main state sponsors of ISIS Daesh and Al Qaeda inside Syria, namely the US, UK (largely involved in the air raids), plus four countries of the region: Turkey, Saudi Arabia, Israel and Qatar. The respective roles of the four regional countries relating to recruitment, training, logistics and the financing of terrorism have been amply documented.

This Operations Room (i.e Combat Information Center) in the Aleppo region as well as field operations rooms in other regions (in territories controlled by rebel forces) are in permanent liaison with the US, Israeli and allied military command and control.

We will recall that in October 2015,  Obama announced that he was dispatching US Special Forces to operate on the ground inside Syria in the alleged counterterrorism operation against ISIS-Daesh. These US Special Forces would “involve fewer than 50 Special Operations advisers, who will work with resistance forces battling the Islamic State in northern Syria but will not engage in direct combat” (WP, October 30, 2015).

They will not engage in combat, they will be involved in”advisory” activities, –i.e. both within rebel formations as well as in the field operations rooms.

In recent months (May 2016), Washington confirmed that another 250 US special forces were to be deployed on the ground in Syria. A select number of intelligence officials were no doubt assigned to the field operations rooms.

This dispatch of US special forces coincided with the influx of  thousand of newly recruited “jihadist mercenaries” who joined the ranks of the various terror formations.  “Thousands of terrorists” were reported to have crossed the Turkey-Syria border in early May 2016, to be deployed against government forces in the Aleppo region.

The Operations Room in the Aleppo region was used to coordinate actions on the ground, drone surveillance as well as air-strikes.  According to the Fars report, the intelligence personnel assigned to the US led coalition Operations Room destroyed by Russia was  involved in coordinating US and allied sponsored terrorist attacks in Aleppo and Idlib. In all likelihood, the Operations Room destroyed by Russia was also involved in the planning and implementation of the Deir Ezzor attack by the US Air force against Syrian SAA forces, carried out in the immediate wake of the Geneva ceasefire agreement.

The Syria based “Operations Rooms” were also in liaison with US and allied command as well as Special Forces on the ground (including Western military personnel hired by private mercenary companies) embedded within the various rebel terror groups including ISIS-Daesh and Al Nusra.

The existence and location of the Aleppo region Operations Room facility must have been known and (until recently) tolerated by both the Syrian government and the Russian military. And until recently no action was taken.

According to the Fars News Agency report (yet to be fully confirmed), it would appear that Moscow chose to target the Aleppo region (“semi-secret”) Operations Room in the immediate wake the Pentagon’s decision to order the USAF airstrikes against Syrian government forces involved in combating the ISIS-Daesh terrorists in Deir Ezzor.

The Russian attack against a US-NATO intelligence facility reported by Fars News Agency has not been picked up by the media, nor has it been acknowledged at the official level.

Assuming that the Fars New Report is accurate, the Russian attack against the US led coalition operations room has significant implications. Does it create a precedent? Russia attacks a US-led intelligence facility in reprisal for the Deir Ezzor attack against Syrian forces

It constitutes a potentially dangerous watershed in the evolution of the war on Syria, which should be seen within the broader context of military escalation.
Yet at the same time the Operations Room is an undeclared intelligence facility. Washington has not acknowledged it and Moscow has not provided an official confirmation of the attack. The Russian media is mum on the subject and so is Washington. Neither side has interest in making this issue public.


The original source of this article is Global Research
Posted by seemorerocks at 12:59