Americans blame Russians for attack on humanitarian convoy in Aleppo 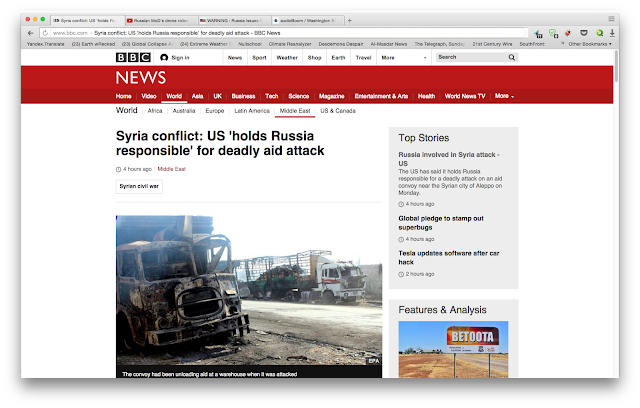 Russian and Syrian warplanes did not launch airstrikes on an aid convoy that was attacked en route to Aleppo, the Russian Defense Ministry said. The ministry added that only the militants who control the area had information regarding the location of the convoy.

“Russian and Syrian warplanes did not carry out any airstrikes on a UN humanitarian aid convoy in the southwest of Aleppo,”  Defense Ministry spokesman Igor Konashenkov said in a statement Tuesday.

The Russian Center for Reconciliation said that it had used drones to accompany the convoy because its route passed through territory controlled by the rebels, but only to a certain point.

"Around 13:40 Moscow time (10:40 GMT) the aid convoy successfully reached the destination. The Russian side did not monitor the convoy after this and its movements were only known by the militants who were in control of the area,” Konashenkov dded.

The Defense Ministry spokesman said that the Russian military had been looking at video footage from the scene and that there was no sign of the convoy being targeted by shells or an airstrike.

“We have closely studied the video footage from where the incident took place and we did not find any signs of any ammunition having hit the convoy. There are no craters, while the vehicles have their chassis intact and they have not been severely damaged, which would have been the case from an airstrike,” Konashenkov said.

“All of the video footage demonstrates that the convoy caught fire, which strangely happened almost at exatly at the same time as militants started a large scale offensive on Aleppo.”

The Red Cross said that at least 20 civilians and one aid worker had been killed after what the organization believed was an airstrike struck the 31-truck convoy.

The aid worker was identified as Omar Barakat, the director of a sub-branch of the Syrian Arab Red Crescent (SARC), which was helping with the delivery of aid intended to reach rebel-held areas of Aleppo.

Aid is seen strewn across the floor in the town of Orum al-Kubra on the western outskirts of the northern Syrian city of Aleppo on September 20, 2016, the morning after a convoy delivering aid was hit by a deadly air strike. © Omar Haj Kadour / AFP

On Tuesday the United Nations has reversed allegations that its aid convoy in Syria was the target of an airstrike. "We are not in a position to determine whether these were in fact airstrikes. We are in a position to say that the convoy was attacked," UN humanitarian spokesman Jens Laerke said.

The UN spoke of a draft error while referring to the initial term of ‘airstrike.’
Meanwhile, White House on Tuesday asserted that it holds Russia“responsible for air strikes in this space, given that their commitment under the cessation of hostilities was to certainly ground air operations where humanitarian assistance is flowing,” Reuters quoted deputy national security adviser Ben Rhodes as saying. Rhodes called the alleged bombing an “enormous humanitarian tragedy.”

Benoit Matsha-Carpentier, the head of communications at the IFRC, spoke to RT and said there has been a loss of life, but it is difficult to understand fully what has happened.

“We have very diverse information and it is quite difficult to get a full picture of the situation,” he said. “Very tragically, we have volunteers from the Red Crescent who have been attacked. We have information that several people have died, but we don’t have confirmation on the identities.”

The SARC said it would suspend aid deliveries in Syria for three days in protest at the airstrikes on the convoy.

Meanwhile, the UN said it will be suspending all its aid convoys while the security situation in Syria is assessed.

"As an immediate security measure, other convoy movements in Syria have been suspended for the time being pending further assessment of the security situation," UN humanitarian aid spokesman Jens Laerke said. He added that the UN had received permission from the Syrian government to deliver aid to all areas of the country.

The International Committee of the Red Cross (ICRC) is also postponing an aid convoy that was to deliver supplies to four besieged Syrian towns.

A damaged truck carrying aid is seen on the side of the road in the town of Orum al-Kubra on the western outskirts of the northern Syrian city of Aleppo on September 20, 2016, the morning after a convoy delivering aid was hit by a deadly air strike. © Omar Haj Kadour / AFP

Earlier, the Kremlin said it was assessing the situation, while Vladimir Putin’s press secretary, Dmitry Peskov, said it would be incorrect to make hasty conclusions when trying to apportion blame.

“I do not think it is possible and correct to make unfounded conclusions. At the moment, our military is checking information regarding the airstrike and I hope they are getting concrete information from first-hand sources that were present in order to present their own findings,” he said.

Peskov also pointed out that terrorists from Jabhat Al-Nusra (Al-Nusra Front) had been firing rockets at areas under the control of the Syrian government.

“We know that the Syrian armed forces, who for the whole week have been the only party to have kept to the terms of the ceasefire, had to respond to this offensive,” he said.

Washington was quick to blame Russia for the attack on the aid convoy, even if Moscow’s planes were not involved, as it had responsibility for controlling Syrian government forces under the terms of the ceasefire agreement.

“The destination of this convoy was known to the Syrian regime and the Russian Federation and yet these aid workers were killed in their attempt to provide relief to the Syrian people,” US State Department spokesman John Kirby said in a statement.

“The United States will raise this issue directly with Russia. Given the egregious violation of the cessation of hostilities we will reassess the future prospects for cooperation with Russia,” he added.

For its part, Russia’s Foreign Ministry has issued a statement, accusing Washington of attempting to draw attention away from the US-led coalition’s fatal “mistake” from last week, when it repeatedly struck at Syrian government positions, killing over 60 troops and injuring over 100 people.

“Such unfounded, premature accusations, among other things, are designed, as it seems, to turn attention away from a strange “mistake” made by the pilots of the US-led coalition on September 17, when its warplanes were bombing the positions of the Syrian government forces near Deir ez-Zor,” the statement reads.

Political commentator John Wight told RT that it was hypocritical to blame the Russians, adding that Washington has constantly rejected Moscow’s requests to share intelligence regarding the location of militants.

“Clearly we are seeing a pattern where any civilian target that is hit in these airstrikes is automatically blamed on Russia or Syria and never on the US or its allies,” he said.

“It is deeply, deeply hypocritical of the Americans to blame the Russians when they have been denying cooperation with Russia, who has been calling for cooperation throughout this conflict, in order to target the rebels,” he added. 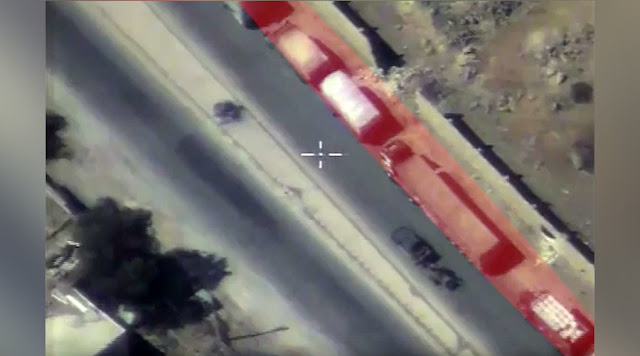 Militants driving a pickup with a mortar sought cover behind the UN-led aid convoy that was destroyed near Aleppo, the Russian military has said, releasing a video from one of its monitoring drones in Syria.

“Analysis of the yesterday’s drone footage monitoring the movement of the aid convoy through the militant held areas helped to reveal new details,” Konashenkov said. He added that the drone footage points at insurgents seeking cover behind the trucks.

“The video clearly shows how the terrorists are relocating a pickup truck with a large-caliber mortar.”

The footage shows the pickup in question riding alongside a line of aid trucks, and stopping right next to one of them, so it can be seen from one side only.

On Monday a humanitarian convoy consisting of 31 trucks was attacked while heading to Aleppo. According to the Red Cross, 20 civilians and one aid worker died as a result. Initial reports by the organization claimed the convoy had been targeted by an airstrike.


Russia denied the allegations, citing the destruction levels of the affected vehicles.

“There are no craters, while the vehicles have their chassis intact and they have not been severely damaged, which would have been the case from an airstrike,” Konashenkov said.

On Tuesday, the UN also retreated from its claims that the convoy was hit by military planes.