The battle for Deir Ezzor takes a turn for the worse

Until the Russians agreed a truce with the double-crossing Americans allowing the terrorists to regroup, and uptil the Americans bombed Syrian army positions giving ISIS a leg-up the terrorists were on the run.


I think it is time for the masks to come off and the Russian-Syrian-Iranian coalition to strike the terrorists and all those that get in the way with all their force. 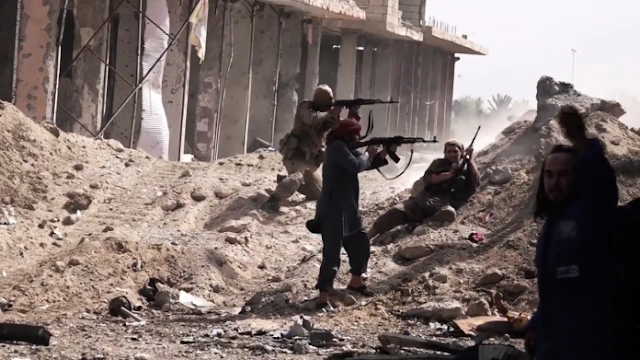 DEIR EZZOR, SYRIA (3:05 A.M.) - The Islamic State of Iraq and Al-Sham (ISIS) launched a major offensive in southwest Deir Ezzor on Wednesday, targeting the strategic Thardeh Mountains at the western rim of the provincial capital.

ISIS launched their offensive from Point 3 at Jabal Thardeh, striking the Syrian Arab Army's (SAA) defenses along points 1 and 2 at the eastern slopes of the mountain.

Following a fierce battle on Wednesday, the Islamic State terrorists were able to establish full control over the entire mountaintop, leaving them within striking distance of both the Deir Ezzor Military Airbase and provincial capital.

In response to the Islamic State's advances, the Syrian Arab Army's 137th Artillery Brigade of the 17th Reserve Division has requested reinforcements from Deir Ezzor City, where the Republican Guard units are currently on the offensive near the Euphrates River.


Much of the Islamic State's success is a result of the U.S.' airstrikes that fractured the Syrian Arab Army's defenses at Jabal Thardeh.
Posted by seemorerocks at 17:12