The end of the ceasefire

US, Russia to Hold Urgent Meeting on Syria Following Ceasefire Collapse
Russian and US officials will hold urgent meetings on Monday night and Tuesday to discuss the collapse of the ceasefire in Syria, according to a US official. 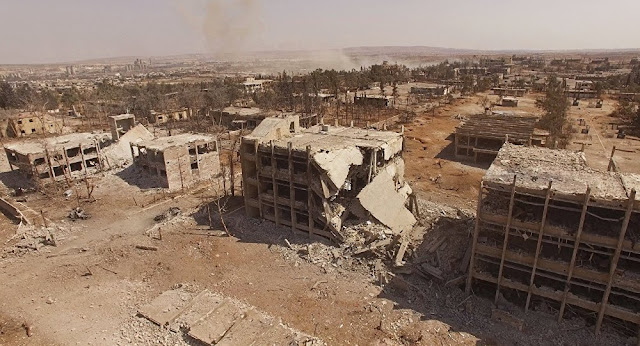 "We are also going to be meeting with the Russians at high levels to try to get a sense from them about where they think this [Syrian ceasefire] can go from here," the US official said.

A US official, speaking on condition of anonymity, said that an airstrike on aid workers on Monday has done significant harm to the peace plan.

"What happened today has dealt a serious blow to our efforts to bring peace to Syria," the official stated, claiming that the aid workers were hit by a strike not launched by the US-led coalition.

US Central Command has admitted responsibility for the strike, claiming it mistook the Syrian forces for Daesh terrorists.

In addition to American fighters, the UK, Australia, and Denmark were also involved in the incident.

On September 9, Russian Foreign Minister Sergei Lavrov and US Secretary of State John Kerry announced a new plan on Syria, which stipulated a ceasefire tha came into force last Monday.

It was the first step toward establishing a Joint Implementation Center which would coordinate Russian and American airstrikes against terrorist groups. The fate of this plan remains unkown in light of the airstrikes.

Update: well, that was quick: according to AFP the Syrian ceasefire is now over, just one week after it began

* * *
Update: well, that was quick: according to AFP the Syrian ceasefire is now over, just one week after it began

AFP news agencyVerified account‏@AFP
#BREAKING Syria army declares 'end' of ceasefire
3:03 AM - 20 Sep 2016
* * *
Barely a week into the latest "hard fought" Syrian ceasefire brokered by the United States and Russia last weekend, the deal seemed on the verge of collapse on Monday as a rebel official said it had practically failed and signaled insurgents were preparing for a full resumption of fighting. Already widely violated since it took effect a week ago, the ceasefire came under added strain at the weekend when Russia said jets from the U.S.-led coalition against Islamic State killed at least 62 Syrian soldiers in eastern Syria

Then, adding fuel to the fire, moments ago, the Assad administration again lashed out at the US-coalition when Assad said the "confused" American attack on Syrian soldiers which killed 62 as previously reported, was a "naked American aggression."

"Increased state support for terrorists hostile to Syria has recently presented itself
in the form of naked American aggression against one of the Syrian army positions in Deir ez-Zor in favor of the interests of the [Daesh jihadist group]," Assad said, as quoted by the Syrian presidency’s Twitter account, hosting a senior Iranian diplomat. He added that "countries hostile to Syria increase their support for terrorism as Syria succeeds in liberating territories and signing ceasefire agreements."

As previously reported on Saturday, the US Central Command said that the Syrian forces were mistaken for Daesh terrorists, in response to which Russia accused the US of "defending ISIS." Australia, Denmark and the United Kingdom have confirmed their participation in the airstrikes in Deir ez-Zor. Assad emphasized the importance of support provided by Russia and Iran during Syria's war against terrorism.

The United States relayed "regret" about the unintentional loss of life.The Danish defense minister said on Monday "more credible sources" were needed before he could draw conclusions. "I don't want to explore different scenarios until we are certain, that we have even hit Syrian soldiers," Minister of Defense Peter Christensen told local news agency Ritzau. "So far it's only a Russian report. I think we need others and more credible sources, before I conclude anything."

Going back to the ceasefire agreement that was triumphantly announced by John Kerry last Friday night in Geneva, Reuters notes that while the agreement has led to a significant reduction in fighting over the past week, violence has been increasing in recent days, and a planned delivery of humanitarian aid to besieged rebel-held districts of eastern Aleppo - one of the first steps in the deal - has been repeatedly postponed.

Plans to evacuate several hundred rebels from the last opposition-held district of Homs city have also overshadowed the agreement, with rebels saying it would amount to the government declaring the ceasefire over. The Homs governor said the plan had been postponed from Monday to Tuesday.

Making matters worse, the Russian General Staff said Monday that US-backed Syrian rebels have not separated from terrorists, but united with al-Nusra Front and are preparing for an offensive. According to the Russian military, the only parties adhering to the truce are Moscow and the Syrian government forces, while the United States and opposition groups it controls have not fulfilled a single obligation according to the Russia-US agreement, the General Staff said.

"The United States and so-called moderate opposition groups under its control have not fulfilled a single commitment taken on under the Geneva agreements. Above all, the moderate opposition has not been separated from al-Nusra Front [also known as Jabhat Fatah al Sham]," Lt. Gen. Sergei Rudskoy said at a briefing.

"In the provinces of Aleppo and Hama, opposition units used the ceasefire to regroup, get more ammunition and prepare for an offensive to capture more territories, while the Syrian troops have ceased combat operations," Lt. Gen. Vladimir Savchenko said.

"The joint US-Russian statement on the cessation of hostilities in Syria reached on February 22, 2016 says that our states 'will also work together…to delineate the territory held by Daesh, al-Nusra Front and other terrorist organizations designated by the UN Security Council.' Unfortunately, our US colleagues still have not made any real steps in this direction," the Russian Defense Ministry said.

"In the past 24 hours alone, the number of shelling attacks by militant groups reached 53 episodes. The cessation of hostilities regime has been violated a total of 302 times since it came into effect. During this period, 63 civilians died and 252 were injured, Syrian armed forces lost 153 service members," Lt. Gen. Sergei Rudskoy, the head of the Russian Chief of the General Staff's Main Operational Directorate, said.

As a reminder, several months ago, in a loudly ridiculed development, the US said it would boost its support for the "moderate Syrian opposition" when it announced, rather comically, that it would sever its ties with the al-Qaeda linked al-Nusra front.

The Russian General Staff also added that it suspects the US of attempts to create such a situation in Syria to accuse Moscow and Damascus of disrupting the delivery of humanitarian aid. The issue of providing humanitarian access to besieged areas of Aleppo has also not been resolved, Rudskoy added, stressing that opposition fighters have failed to adhere to the agreement and to set up a checkpoint to allow aid convoys to pass through safely. "Armed groups under US control have not set up a checkpoint in the eastern part of the Castello road [north of Aleppo] and have not handed it over to the Syrian Arab Red Crescent. Fighters, weapons and equipment have not been withdrawn from Castello."
Meanwhile,  U.N. officials have blamed Damascus for blocking aid deliveries to other besieged, rebel-held areas.

Perhaps as a result of the deteriorating "deal" conditions, the Syrian army had yet to announce any extension of the seven-day ceasefire it declared on Sept. 12, which was due to expire at 11:59 p.m. (2059 GMT) on Sunday, according to the statement issued by the army command when the truce was announced.
* * *

As Reuters adds, the Syrian government and its allies have mostly focused their firepower on western areas of the country that are of greatest significance to Assad, including the main cities of Damascus, Homs, Hama, Latakia, Tartous and Aleppo.

ned evacuation of several hundred rebels from the last opposition-held district of Homs, al-Waer, has also endangered the deal. Rebels said that plan would amount to the government declaring the truce over.

The Homs governor Talal Barazi said the evacuation had been postponed due to "logistical obstacles", and negotiating committees were completing the preparations, state TV reported. He told journalists it would take place on Tuesday morning.  Barazi said on Sunday that between 250 to 300 rebels were due to be evacuated from Waer, on Monday. The opposition say such evacuations are part of a government strategy to forcibly displace its opponents after years of siege and bombardment. The government has been seeking to conclude local agreements with rebels in besieged areas to give them safe passage to the insurgent stronghold of Idlib in northwestern Syria.

In any case, absent some dramatic change in the negative sentiment to have emerged between the fighting factions and their proxy supporters, the deal appears to be largely finished. A collapse of the ceasefire, a major project of U.S. Secretary of State John Kerry, could doom any chance of the administration of President Barack Obama negotiating a breakthrough on Syria before it leaves office in January. 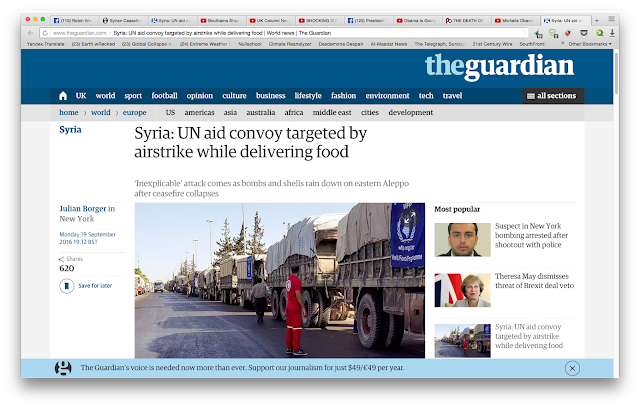 Normally, Radio NZ wouldn't know the  truth if they tripped over, but somehow this piece made it onto air. The ignorance of the interviewer is palpable.