Imperialist powers gang up at UNSC to accuse Russian and Syria

US, Britain, and France call for Emergency UN Meeting over Syria 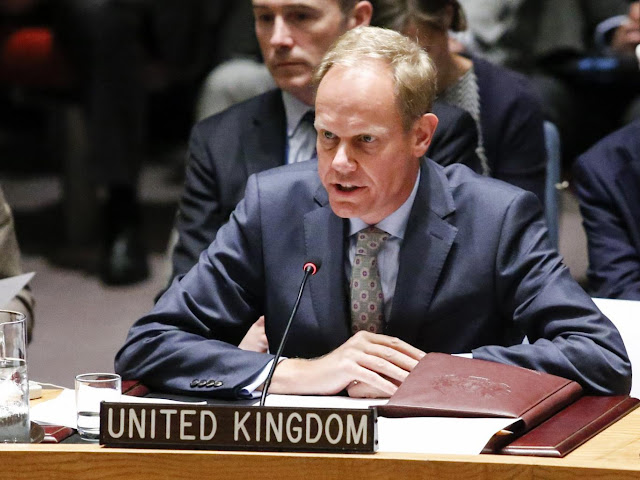 Russia has been directly and repeatedly accused of war crimes at the UN security council in an unusually blunt session, as hopes of any form of ceasefire were flattened by the scale and ferocity of the Syrian regime’s assault on eastern Aleppo.

The war crimes accusations centred on the widespread use of bunker-busting and incendiary bombs on the 275,000 civilians living in the rebel-held east of the city, weapons that Moscow’s accusers say were dropped by Russian aircraft.

“Incendiary munitions, indiscriminate in their reach, are being dropped on to civilian areas so that, yet again, Aleppo is burning. And to cap it all, water supplies, so vital to millions, are now being targeted, depriving water to those most in need. In short, it is difficult to deny that Russia is partnering with the Syrian regime to carry out war crimes.”

Rycroft later walked out of the chamber with his US and French counterparts before the Syrian government representative began speaking, in protest at the regime’s bombing campaign.

Earlier in the day, the UK foreign secretary, Boris Johnson, said: “Putin’s regime is not just handing Assad the revolver; he is in some instances firing the revolver. The Russians themselves are actually engaged.”

Save the Children quoted doctors in Aleppo on Sunday as saying that about half the casualties in the city were children.

At the security council meeting, Rycroft’s French counterpart, François Delattre, agreed the use of bunker-busters and incendiaries on urban residential areas was a war crime.

“They must not be unpunished,” he said. “Impunity is simply not an option in Syria.”

“Aleppo is to Syria what Sarajevo was to Bosnia, or what Guernica was to the Spanish war,” the French envoy said. “this week will go down in history as the one in which diplomacy failed and barbarism triumphed”.

The US ambassador, Samantha Power, highlighted the targeting of three out of four centres in eastern Aleppo used by the volunteer emergency services – the White Helmets – with the consequence that lifesaving equipment had been destroyed and “those buried in rubble in Aleppo are much more likely to die in the rubble”.

She said while Russia’s foreign minister, Sergei Lavrov, had been talking about restoring peace in Syria at council meetings last week, incendiary bombs were being loaded on to Russian planes in preparation for the new offensive.

“What Russia is sponsoring and doing is not counter-terrorism. It is barbarism,” Power said, urging other national representatives to speak out. “History will not look kindly on security council members who stay silent in the face of this carnage,” she said, adding that it was also not the time to use the passive voice and observe that Aleppo was being bombed. It was time, she said, to say who was doing the bombing.

In response, the Russian envoy, Vitaly Churkin, blamed the breakdown of a week-long, US-Russia-brokered ceasefire on rebels, including the “moderate opposition” backed by the west. Extremist groups in eastern Aleppo were holding its population hostage, Churkin claimed, stopping them from leaving and using them as human shields.

He praised the Assad regime in Damascus for its “admirable restraint”, claiming it was in fact Syrian government forces that were surrounded and were only firing on eastern Aleppo when they had been fired upon. “The Syrian regime only uses air power to get terrorists out of the city with minimal civilian casualties,” Churkin said, as he dismissed reports of mass killing in eastern Aleppo as fake, using footage from government-held western Aleppo.

The UN special envoy on Syria, Staffan de Mistura, said the ceasefire had significantly reduced the level of fighting, allowing Aleppo residents to “come out of their shelters and houses to celebrate Eid on the streets”.

He said: “People started to become cautiously optimistic,” but added the ceasefire was broken by bombing a day before the end of its first week “when five districts were hit reportedly with five severe airstrikes” following the Syrian government’s unilateral declaration of an end to the truce.

“Since that fateful day, we have seen the situation in eastern Aleppo deteriorate to new heights of horror,” de Mistura said. He said the airstrikes were reported to have killed 213 people in Aleppo province, 139 of them in eastern Aleppo.

De Mistura said: “We heard the word ‘unprecedented’ – in quantity and also in scale and type – in [descriptions of] the types of bombing. We have seen reports, videos and pictures of reported use of incendiary bombs that create fireballs of such intensity that they light up the pitch darkness in eastern Aleppo, as though it was actually daylight. We now hear of bunker-busting bombs being used and see pictures of large craters in the earth much larger than in previous aerial bombings.

“If it is confirmed, the systematic indiscriminate use of such weapons in areas where civilians and civilian infrastructure are present may amount to war crimes.”

De Mistura said he had been asked why, in the face of such an onslaught and failure of diplomacy, he did not resign. He said he would not do so “because any sign of me resigning would be a signal that the international community is abandoning the Syrians, and we will not abandon the Syrians, and neither will you”.

Tom Fletcher, the UK’s former ambassador to Lebanon, said the change in tone used at the security council on Sunday marked a new phase in the west’s response to the conflict, jettisoning residual hopes of making a deal with Russia.

“Normally diplomatic language is cautious: even the Syria contact group’s statement yesterday only spoke of patience with Russia being ‘not unlimited’. But today’s statements in the security council from France, the US and UK are more raw, and more angry. They show that the recent policy – admittedly more in hope than expectation – of trusting Russia to restrain Assad is now buried in the rubble of Aleppo. This signals a new phase. Assad has calculated that US elections give him a free hand to massacre. We will now see whether or not he has underestimated US readiness to protect the most vulnerable.” 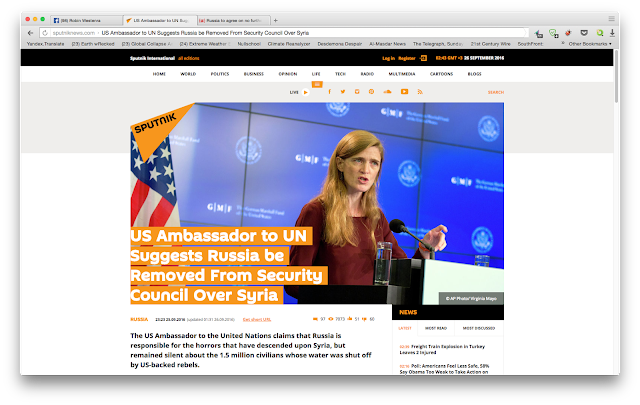 The US Ambassador to the United Nations claims that Russia is responsible for the horrors that have descended upon Syria, but remained silent about the 1.5 million civilians whose water was shut off by US-backed rebels.

Matthew Rycroft, along with his US and French counterparts, demanded a halt to the offensive in Aleppo
Russia to agree on no further unilateral steps to cease hostilities in Syria
Accusations centre on widespread use of bunker-busting and incendiary bombs on civilians in rebel-held eastern Aleppo 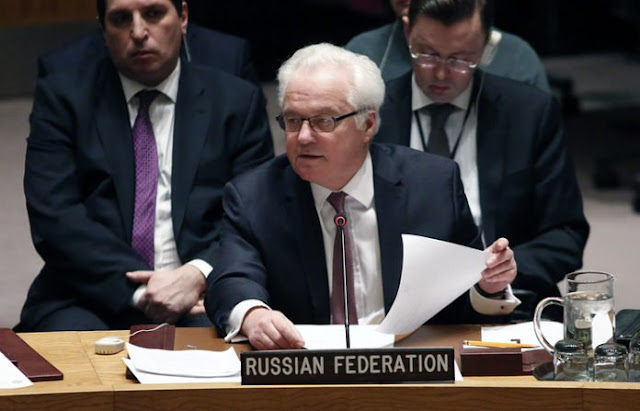 (TASS) Russia will agree on no further unilateral steps to cease hostilities in Syria after the United States’ tactical tricks that gave terrorist groups time to regroup and reinforce, Russia’s Permanent Representative to the United Nations Vitaly Churkin said on Sunday at an extraordinary meeting of the Security Council.

"Requests for ceasefire — now for 48 hours, then for 72 hours — have become a routine practice," he said. "We have always been making concessions, at least tried, and reached agreements with the Syrian government. In the long run, it all ended in militants’ regrouping, receiving reinforcement and staging new offensives."
Then, he said, a demand followed that the Syrian government unilaterally stop flights of its warplanes as a preliminary condition. "First they said for three days. We agreed. Then they said, ‘No, the US president has changed his mind, we need seven days.’ No one knows why. Such tactical tricks cannot go on endlessly. We will agree on no further unilateral steps," he said.
He said the Russia-US talks yielded a detailed plan which, if duly implemented, will help "ease the situation on the ground, cardinally improve the humanitarian situation and give a start to resumption of the United Nations-brokered intra-Syrian talks," Churkin said, adding that the deal had many opponents and "it looks like their non-constructive position has outweighed the drive for peace and common sense."
The American side, in his words, "has actually acknowledged its inability to influence the groups it controls and honestly implement the agreements," first of all, to separate moderate groups from terrorists and "draw relevant division lines on the ground."
READ  Britain, France, US seek urgent Security Council meeting on Syria

"It is written in black and white in all documents. Nothing has been done. Even in what concerned listing terrorist groups, we saw only groping prompting one to think that the key goal is still to retain combat potential of the Syrian government’s opponents, whoever they might be," he said.
"What we need is a serious process, without fooling around. Conditions should not be changed every other day because we have a deal. What must be done is to implement it," Churkin continued.
However he said he doesn’t think the Russia-US agreements could be given up for lost. "I don’t think so, but the situation is extremely difficult. I don’t think it (the deal) is dead," he stressed.
More:
http://tass.com/world/902138?_ga=1.168650849.1704492283.1474036253